You can always count on Harry Styles to do the most when it comes to fashion. As co-chair of the 2019 Met Gala, which is themed around camp, he was bound to show up wearing something unique — and let me just say, Harry Styles’ Met Gala 2019 outfit did not disappoint.

Styles showed up in a custom Gucci all-black lace ensemble that showed off his many tattoos (and his bod). With a black bow tied at the neck, and lace detail on the sleeves, Styles’ look was the definition of class. He accessorized with one pearl drop earring and rings on every finger, along with heeled black boots and his signature Harry Styles grin.

The closer you look at the outfit, the more detail you’ll notice. The whole top section is sheer, with lace panels on the chest and lace cuff sleeves. He exuded an effortless cool on the red carpet as he posed with Gucci’s creative director Alessandro Michele — who wore a bright pink crushed velvet suit with a silver headpiece. The two are co-hosting the event tonight, along with Lady Gaga and Serena Williams. Styles, who is king of the unexpected fashion moment, is attending the Met Gala for the very first time this year, and he definitely brought the heat. 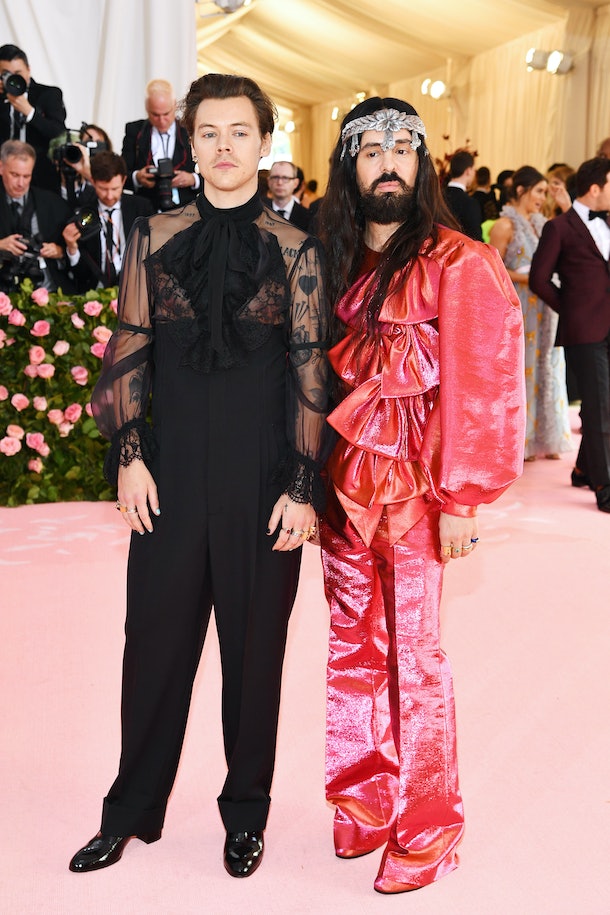 I, for one, cannot get enough of this. Styles is bringing serious gender-bending fun to the pink carpet, and his version of camp is completely on point. Following Lady Gaga, who showed up in four different layered outfits and a whole entire entourage, Styles looks low-key by comparison — but in the best way possible.

Fans on Twitter were losing their minds over the ensemble. Everyone has been waiting to see what look Styles would pull off, and he was just as extra as I had been hoping. And not only that, but he looks confident and cool AF. If you’ve got a lot of feelings about Styles’ Met Gala look, you’ll 100% relate to these reactions. I mean, who doesn’t love a fashion icon?

Styles has been laying low lately, ever since he wrapped up his solo tour in July 2018 (which was full of amazing fashion moments). He did show up to the Rock and Roll Hall of Fame Induction Ceremony on March 29, wearing a blue velvet suit for his duet with Stevie Nicks. The bold look was classic Styles, and it definitely strengthened the hype about what the star would wear on fashion’s biggest night. 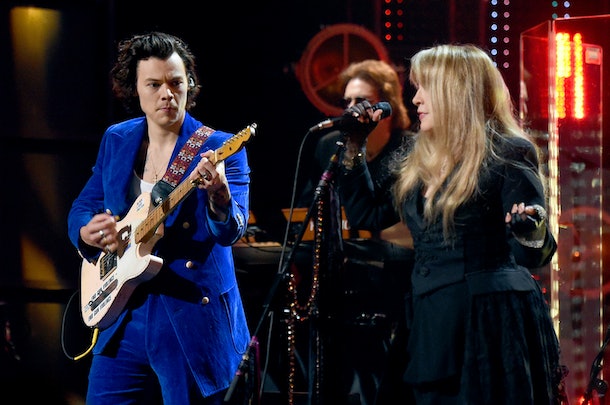 Dare I say, Styles’ Met Gala 2019 look might be his best one yet? And that’s saying a lot, considering he’s been a major force in fashion for a while now. The all-black lace moment is just what I needed in the midst of all this bright color on the pink carpet. I, along with all of Twitter, will be singing his praises all night long. And also running to buy a black lace top immediately.