A mother vowed to never buy washing pods again after her toddler ‘mistook one for a squeezy toy’ and was left with ‘bright red burns’ after a Persil capsule burst on him.

Danielle Savage, 29, from Sheffield, South Yorkshire, was doing housework two weeks ago when her 23-month-old son Ronnee grabbed a Persil 3-in-1 Colour Protect capsule after she got the packet out.

The receptionist claimed she turned her back for a split-second when the curious toddler picked up an ‘inviting’ multicoloured pod, which she believes he mistook for a ‘squeezy toy’.

But the pod burst all over his face and chest and Ronnee let out a piercing ‘wail’ as the blue liquid covered his body, before Danielle quickly rushed to wash it off him.

Danielle said she has always bought the pod boxes, which come with child-safe locks to prevent accidents occurring and with prominent warnings, but on this occasion she had forgotten to decant her refill pack. 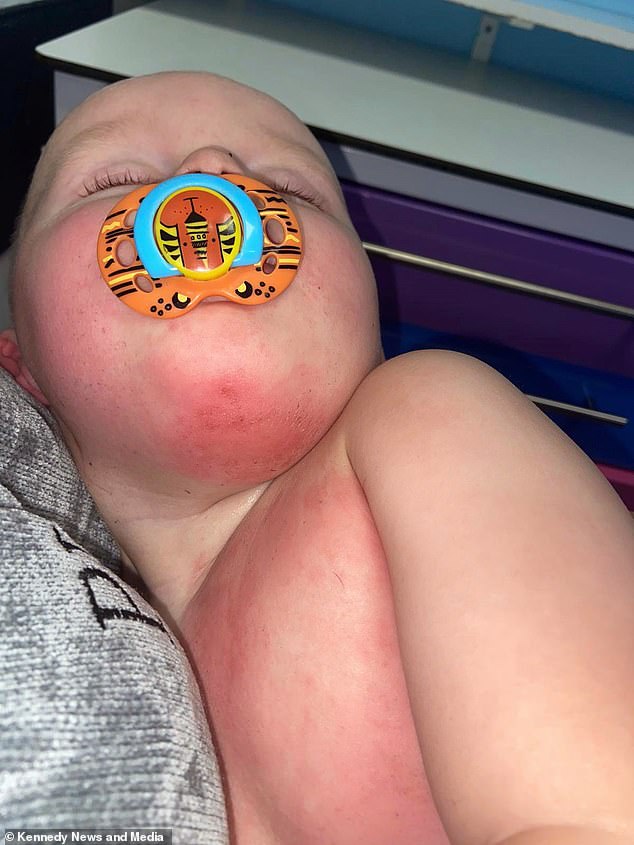 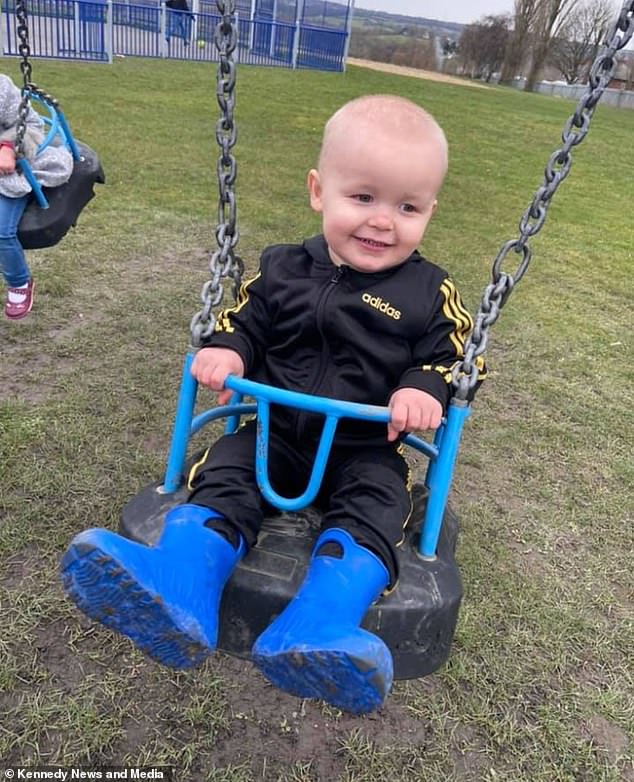 Danielle Savage, 29, from Sheffield, South Yorkshire, vowed to never buy washing pods again after her son Ronnee (above) ‘mistook one for a squeezy toy’ and was left with ‘red burns’

Despite Danielle quickly washing her son, Ronnee suffered painful ‘burns’ which forced his mother and father Wade, 30, to rush him to A&E at Sheffield Children’s Hospital.

Danielle, who feared the outcome for Ronnee could have been much worse, explained: ‘It really was my worst nightmare. As soon as [the liquid] came into contact with him he’d felt it burn.

‘[He let out] a piercing scream. It wasn’t a cry – it was a scream I’ve never heard before. I instantly turned round and saw him.

‘He does talk, and he was saying it hurt, but with how he screamed, he must have been in pain. It was like a wail.

‘It literally happened in a split-second. One minute he was at the side of me, the next he was screaming. It happened so fast.’ 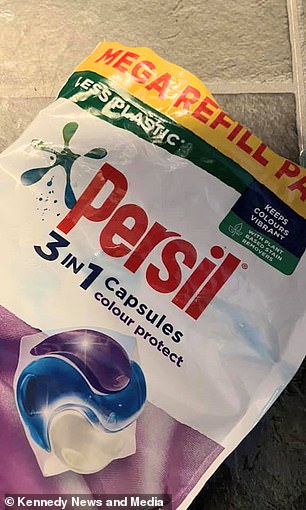 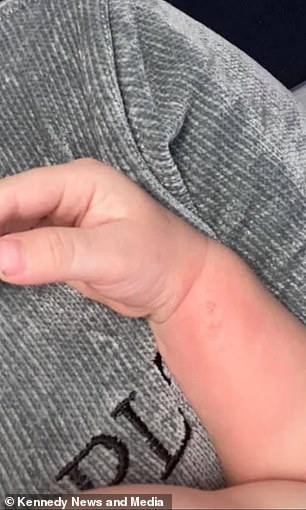 Danielle believes that Ronnee mistook the multicoloured Percil capsule (left) for a ‘squeezy toy’, and said Ronnee let out a piercing ‘wail’ as the blue liquid covered his body (right) 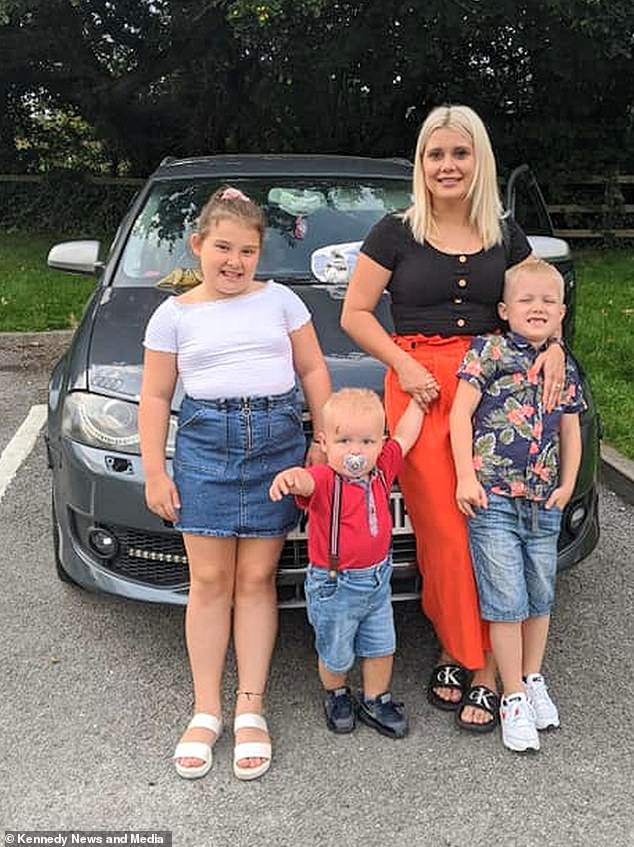 The mother-of-three (pictured with Ronne, Tommee, seven, and Izzabelle, nine) washed the liquid off but Ronnee had to be rushed to A&E at Sheffield Children’s Hospital

Ronnee is making a good recovery but the mother-of-three has stopped buying the washing capsule refill packs after the accident and is urging other parents to do the same.

She continued: ‘As soon as I washed the blue off it was bright red instantly. As soon as it had come into contact it’d burnt his skin.

‘I’ve stopped buying them. I would tell other parents not to buy them.’

On Persil’s website, the brand warns that ‘washing capsules may look a lot like interesting, colourful toys or sweets in [children’s] eyes’.

The mother believes that her youngest child might have mistaken the colourful pods for some of his nine-year-old sister Izzabelle’s toy slime, as the gel had the ‘same consistency’.

She explained: ‘I know there are adverts that tell you to watch out for [the pods], but I don’t think you realise how bad they actually are. I never did.

‘This was a refill pack. I normally buy the boxes and [on this occasion], I hadn’t decanted them into the box. We need to keep them away from our kids. 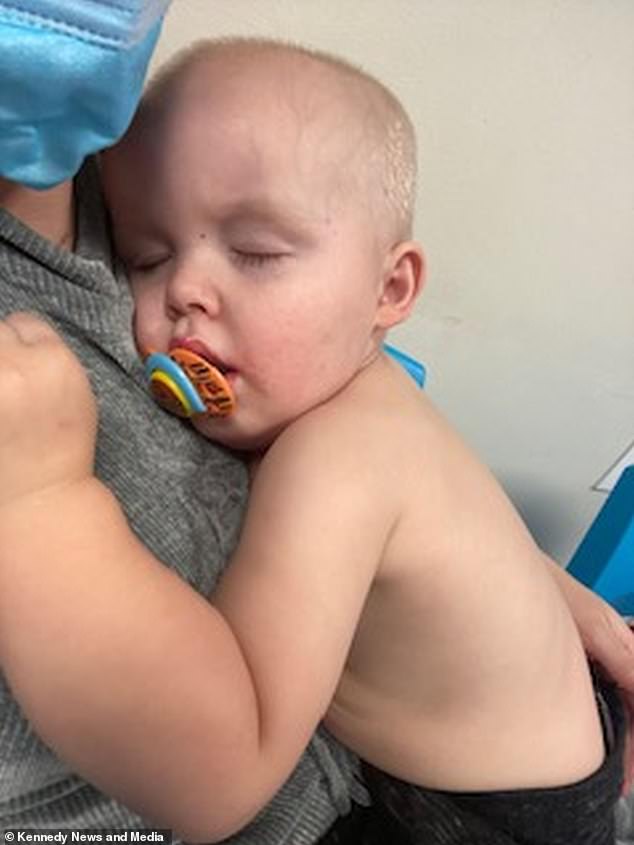 Danielle said she has always bought the pod boxes, which come with child-safe locks, but on this occasion she had forgotten to decant her refill pack (pictured, Ronnee Savage) 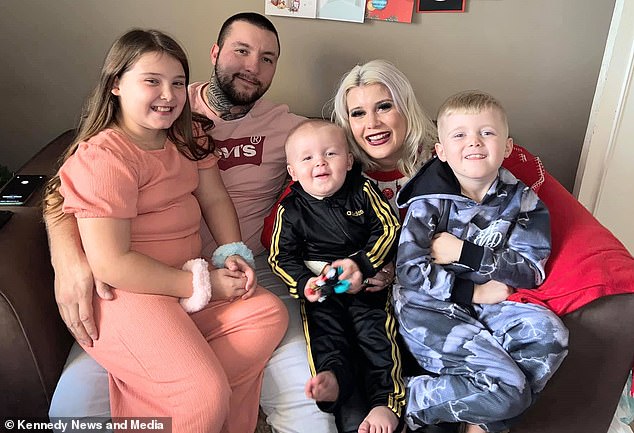 She believes that he might have mistaken the colourful pods for some of his nine-year-old sister’s toy slime (Danielle and husband Wade, 30, with kids Ronnee, Tommee and Izzabelle)

‘My daughter has slime and things. They’ve got the same consistency. To him, they’re the same. They look inviting.’

Danielle claimed that the pods were ‘not safe’ and said that she couldn’t ‘believe’ what it did to her son’s skin as she uses it to wash clothes ‘every day’.

She continued: ‘They’re just not safe – especially for something you use to wash your clothes every day. You wouldn’t believe it could do that to your skin.

‘I was just doing the washing like I normally do. I’d left the bag on the floor and was just putting the clothes in the washing machine.

‘Ronnee was just stood next to me. He was helping me put the clothes in the washing machine.

‘I was stood at the side of him and then I heard him scream. When I turned round, he was covered in the blue liquid from the tablet.

‘He hadn’t got a t-shirt on, but he had a nappy and his trousers on.

‘I picked him up and put him straight under the tap to wash it all off, then we were heading straight to A&E.’

While Ronnee was monitored in hospital, Danielle claims that a medic said Ronnee was one of the less severe cases she had witnessed.

Ronnee was discharged from A&E after one afternoon and given steroid cream to help with the ‘burns’ on his skin, and he ‘luckily’ did not swallow or digest the liquid.

Danielle said: ‘When I went to the hospital, [the nurse] said he was one of the better cases she’d seen. She said kids have had skin grafts from [washing tablets] burning them so badly.

‘She said Ronnee was quite lucky because it’d only gone to the first layer of skin. She washed him with steroid solution to make sure all the liquids were off him.

‘He was observed for five hours. They were monitoring his heart rate and temperature, then he had blood taken. 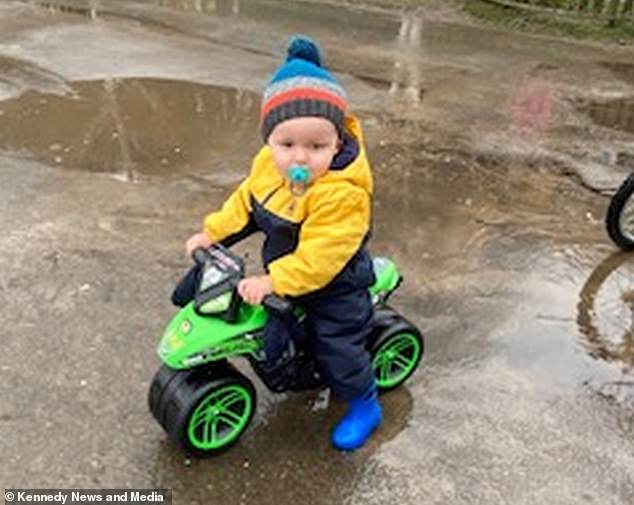 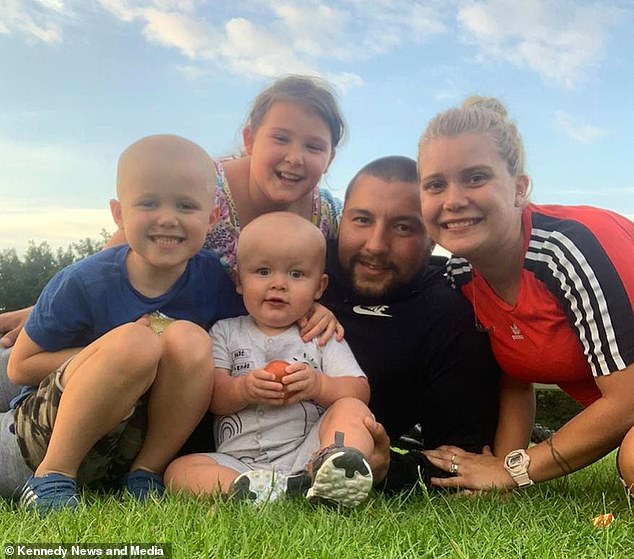 ‘They did a general check of inside his mouth and down his throat to see if he’d swallowed or ingested anything. Luckily that was all clear.

‘Then he was given some steroid cream to put on his burns. He’s a lot better now. It’s healed really well and gone scabby now like when I graze heals.

‘I’ve got serious mum guilt. I hadn’t even gone out of the room.’

A spokesperson for Unilever, who own and manufacture Persil in the UK, said: ‘We’re very sorry to hear of Danielle’s recent experience.

‘We’re glad to hear that Ronnee is making a good recovery and hope he is now feeling much better.

‘All our Persil capsules and packaging are designed to minimise the risk of accidents by including measures such as child-impeding closure systems and safety features, as well as prominent on-pack safety warnings.

‘It is essential that laundry products are always kept out of the reach of children before, during and after use with the pack kept closed.

‘To support this, in addition to on-pack messaging, we also include safety information in our marketing for these products as well as supporting the UK Cleaning Products Industry’s safety awareness and education campaign, Keep Caps From Kids.’