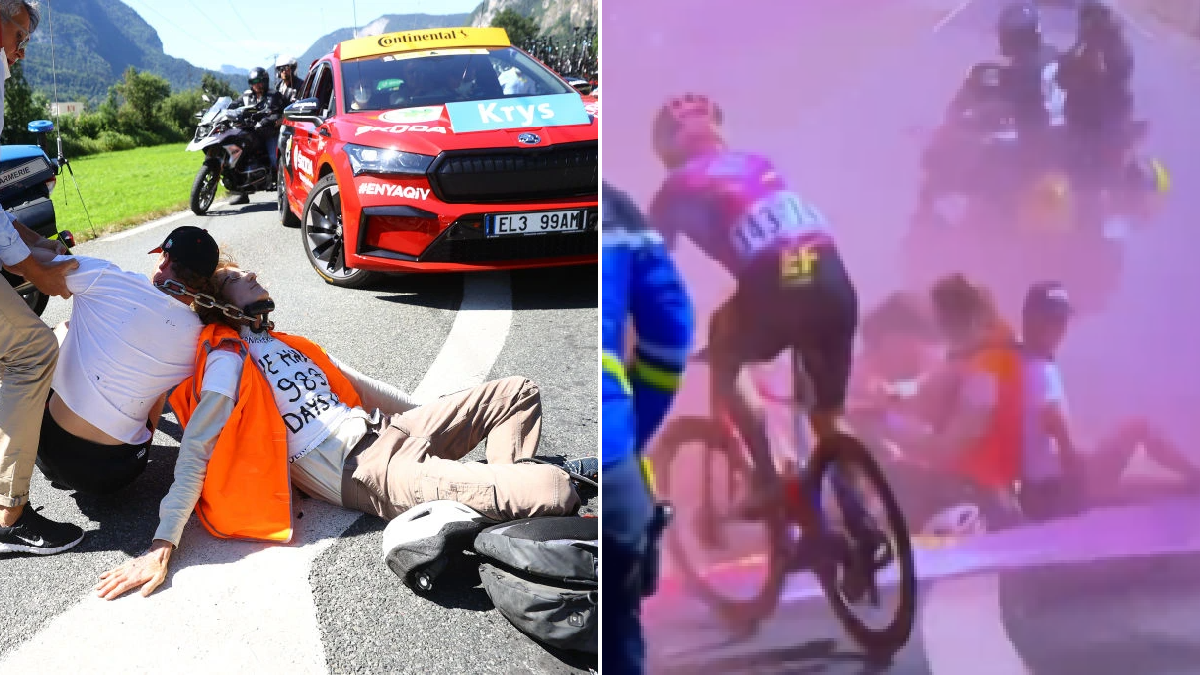 There were chaotic scenes during Tuesday’s Tour de France action after a group of nine protestors blocked the route and forced the race to be suspended.

With around 35km of stage 10 remaining, a small breakaway led by Alberto Bettiol very nearly crashed into a group of climate activates who had positioned themselves in the middle of the road.

The protestors – wearing t-shirts saying ‘Only 989 days left to save our future’ – had lit red flares and as Bettiol made his way through the smoke he had to swerve dramatically to avoid hitting the group.

They appeared to have glued their hands to the road and chained themselves together at the neck, with Tour de France security initially struggling to remove them.

Race director Christian Prudhomme was forced to suspend proceedings as a result, with Bettiol taking the opportunity to relieve himself at the side of the road before doing laps of the waiting cars.

The peloton were also forced to stop once they reached the protestors, leaving a massive horde of riders waiting for around 10 minutes as the group were eventually removed.

French police – who were widely criticised for their policing at the Champions League final between Liverpool and Real Madrid – used some rather heavy-handed tactics to remove the activists, even using pepper spray on some.

A group called Derniere Renovation claimed responsibility for the disruption.

In a statement they explained: ‘Today, nine citizens supporting Last Renovation interrupted the 10th stage of the Tour de France between Morzine and Megeve at Magland to stop the mad race towards the annihilation of our society.

‘We can no longer remain spectators of the ongoing climate disaster. We have 989 days left to save our future, our humanity.

‘The finish line is a ravine and we are calling on our government to turn immediately.

‘Our goal is to force legislation to drastically reduce France’s emissions, starting with energy renovation, the area most likely to bring together social and climate justice today.

‘This is our last chance to avoid catastrophic and irreversible consequences: deadly heat, extreme weather events, famines, mass migrations, armed conflicts… and this for all the next generations of humans.’

When the race resumed, Bettiol tried to make an early breakaway but was swallowed up and a pulsating final sprint saw Magnus Cort win stage 10 by a whisker.