‘Toxic timebombs’: The problem with the plan to stop the mouse plague

A highly toxic poison being released for free by the NSW government to control the mouse plague could have serious effects on farm animals and wildlife but do little to curb the rodent explosion.

Scientists and farmers say the plan by Agriculture Minister Adam Marshall to begin distribution of 10,000 litres of bromadiolone once he got the nod from the Australian Pesticides and Veterinary Medicines Authority will put at risk any scavenger animal that eats the poisoned mice.

The NSW government is seeking approval for the release of a potent poison to end the mouse plague affecting inland regions of the state.Credit:Dean Sewell

As a second-generation coagulant, bromadiolone needs only one feeding by the animal before it dies from uncontrolled bleeding. However, the poison can accumulate in the food chain, killing animals from lizards to kookaburras, owls and eagles that eat the sick or dead mice, said Peter Brown, team leader of CSIRO’s Rodent Management Team.

Dr Brown said the potency of an alternative, zinc phosphide, had recently been doubled and it had few secondary poisoning risks because it does not accumulate.

“We think that’s the best option,” he said, adding that there was not a blanket approval for zinc phosphide use either, with a ban on its application within 50 metres of native vegetation.

Xavier Martin, a grain grower from Mullaley on the Liverpool Plains and vice president of NSW Farmers, said croppers and graziers were exhausted by the mouse plague. They’re being bitten in their beds, draining contaminated water from their tanks and are spending thousands of dollars on approved poisons such as zinc phosphide, he said. The plague could wipe $1 billion off the value of winter crops.

“Zinc phosphide kills almost instantly, or certainly within the hour,” Mr Martin told the Herald as he drove a tractor on his farm, planting the summer wheat crop. By contrast, bromadiolone can take as long as a week to kill mice and in that time the animals can destroy a crop such as canola.

Also, if previous restrictions are applied, bromadiolone would only be permitted on the perimeters of paddocks, leaving the mouse hordes already ensconced unaffected. “They are not lining up around the fence line, waiting for the Marshall Plan,” he said. “It’s not realistic that is a solution.”

Associate Professor Bill Bateman from Curtin University’s School of Molecular and Life Sciences said his group found many reptiles would bio-accumulate the poison: “[As] reptiles seem to be able to survive a bit longer after rodenticide uptake they themselves then become ‘toxic timebombs’, waiting to poison any predator that might eat them.” 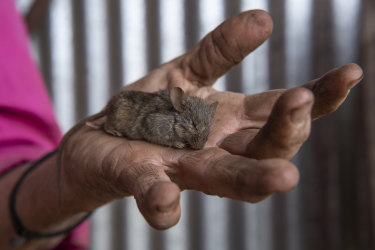 Grain farmer Fiona Adam holding a dead mouse that her dog had killed, at Neurea in central-west NSW.Credit:Louise Kennerley

“Of course, baiting with these toxins can also impact our farm animals, pets and working animals – both during baiting and long after,” Professor Bateman said. “A recent review paper showed that, as large reptiles can be part of human diet both in Australia and other regions, ultimately humans can also be at risk of rodenticide poisoning.”

Mr Marshall was asked about the secondary effects of bromadiolone and when he expected the regulator to approve it for the 400-plus farmers who have already signed up.

“I’ve been on the ground, I live in the bush and I speak to farmers every day and many are asking for bromadiolone to help fight these vermin and this early enthusiasm shows that,” Mr Marshall said in a statement.

“Landholders will be able to surround their crops with bromadiolone-treated grain, which when used in combination with zinc phosphide to kill off mice already in paddock, will give farmers a multi-layered defence,” he said.

A spokesman for the regulator said it had asked the NSW government for additional information on May 20 about the emergency permit being sought and had yet to receive a response.

The NSW Environment Protection Authority was also approached for comment.

Mr Martin of NSW Farmers said the government’s “inaction has turned it into a plague”, resulting as in as much as $1 billion of farm output being lost. That sum would be rise once the value of lost work for food and drink processing industries was taken into account.

He said neither Premier Gladys Berejiklian nor Deputy Premier John Barilaro had visited farms hit by the plague. “The good news is they won’t have to go very far,” Mr Martin said, noting there were reports of mice reaching farms on the coast and also in areas near Sydney such as the Hawkesbury Valley.