Prince Harry and Meghan, the Duke and Duchess of Sussex, sat down for a bombshell interview with Oprah Winfrey in California, where the couple is now living after leaving the U.K. The couple detailed why they decided to turn away from royal life — and revealed the friend who helped them move to California.

In early 2020, as the couple was first stepping back from their “senior” royal roles and aiming to become financially independent, Harry was told, “short notice, that security was going to be removed,” he told Oprah. He said their change of status, since they were “no longer working members of the royal family,” led to their security being pulled.

Harry and Meghan had first relocated to Canada, but their location in Vancouver was publicized by the tabloids. During the interview with Oprah, which aired on CBS Sunday night, Harry said as the coronavirus pandemic ramped up, he knew they had to move — fast.

“So suddenly it dawned on me, ‘Hang on, the borders could be closed, we’re going to have our security removed, who knows how long lockdown is going to be, the world knows where we are, it’s not safe, it’s not secure, we probably need to get out of here,” Harry continued.

Meghan said they didn’t have a plan, but then a friend invited them to stay at one of his homes. It was Tyler Perry to the rescue.

The actor, producer and director offered up a house in  Southern California where Meghan, Harry and their son, Archie, lived for three months with a security detail also provided by Perry. Perry’s generosity “gave us breathing room to try to figure out what we were going to do,” Meghan said.

Perry, who became a billionaire last year, according to Forbes, has been busy during the pandemic.

His production company, Tyler Perry Studios was one of the first to resume production last summer, using strict safety protocols, after the coronavirus pandemic forced Hollywood to grind to a halt. Perry, 51, has also helped raise awareness for vaccinations, appearing in a BET special in January during which he received the shot himself.

Meghan and Harry are now living in their own house in the Santa Barbara area, not far from Oprah, who conducted the interview in the backyard of another nearby home. They have started their own nonprofit foundation, Archewell, and also signed deals with Spotify and Netflix for content creation through Archewell Audio and Archewell Productions.

During the candid interview, the couple also opened up about Meghan’s mental health struggles while living in the U.K., discussions in the palace about “how dark” their baby’s skin tone might be, and a rift between Harry and his father. 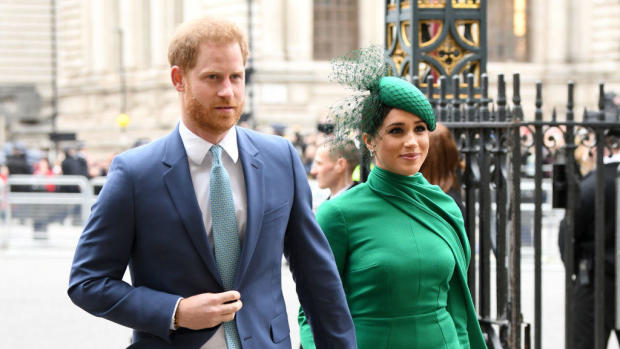