It plays a vital role in holding the government of the day to account yet the Senate is poorly understood by many.

A research report being launched by Senate President Scott Ryan on Tuesday finds the chamber is more representative of how Australians vote than the lower house and there is greater diversity among those elected. 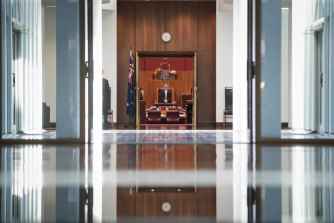 President of the Senate Scott Ryan seen from the Members’ Hall. Credit:Alex Ellinghausen

Despite this, many people don’t know, or are wrong about, how the Senate works, according to a survey for progressive think tank The Australia Institute that forms part of the report.

The Senate has 76 senators – 12 from each state and two each from the Northern Territory and ACT. It shares the power to make laws with the House of Representatives.

Just a quarter of the 1600 people surveyed knew ministers could come from either the House or the Senate and question time was held in both chambers. One in eight knew senators and MPs were paid equally and that a Senate term lasts six years.

The institute’s executive director, Ben Oquist, said the Senate was under-represented in discussions about Australian democracy and politics, which translated into a “democratic deficit” in people’s understanding.

Although former prime minister Paul Keating famously dismissed senators as “unrepresentative swill”, the increasing vote for minor parties and independents across the country is being represented in the Senate in a way that doesn’t translate in the lower house’s single-member electorates.

Nearly one in five senators comes from outside the major parties. In the House of Representatives, the Coalition and Labor received 75 per cent of the vote at the 2019 election and hold 96 per cent of the seats.

“Far from being the unrepresentative swill, it’s kind of democracy’s star in terms of accountability, providing diverse representation, representing the community,” said Mr Oquist, who was a long-time adviser to former Greens leader Bob Brown. “[But] it can’t play as good a role as it should because people don’t understand how it works.”

He argues for better education about the upper house’s role and sees the Senate’s large crossbench as important since it can draw a media focus on whether the government can pass legislation and lead to compromise.

“When the crossbench are involved in those big debates, it does sometimes allow the community into them more as well because you’ve got a more diverse range of senators with a diverse range of connections,” Mr Oquist said.

Senator Ryan has previously defended the Senate from what he dubbed “proposals to nobble” it and described the need for negotiation and compromise as an important and defining feature of Australian politics.