Governments will need to resort to extracting carbon from the atmosphere to avoid catastrophic climate change because they have waited too long to take serious action, according to the only Australian-based researcher of a new international scientific group.

Nerilie Abram, a paleoclimatologist at the Australian National University, said the new Climate Crisis Advisory Group, to be officially launched later on Thursday, would aim to provide “the best scientific advice” on the urgency of slashing greenhouse gas emissions. 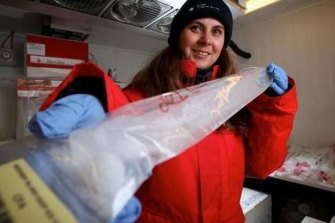 The ANU’s Dr Nerilie Abram after returning from an expedition with the British Antarctic Survey in early 2018.Credit:Paul Rogers

“We’ve wasted so much time,” Professor Abram said. “I hope that we are able to make a difference.”

The group will be chaired by Sir David King, the former UK government’s chief scientific adviser, and includes a range of 14 experts including Fatih Birol, the head of the International Energy Agency.

The organisation plans monthly seminars open to the public to livestream from 9pm AEST on Thursday, and will argue that nations must triple their pledges to cut emissions to limit the damage from global warming.

The launch comes a day after the AFP news agency reported on a leaked draft of the next Intergovernmental Panel of Climate Change (IPCC) report. It warned “the worst is yet to come”, with species extinction, more disease, unlivable heat and cities hit by rising sea levels among the coming calamities, according to a summary carried by Al Jazeera.

“We need to take much more action than the current trajectory we’re on,” Professor Abram said.

However, since temperature increases are likely to exceed the Paris Climate Agreement of curbing warming to 1.5-2 degrees compared with pre-industrial levels, technologies will be needed to remove greenhouse gases from the atmosphere and also restore damaged climate systems. 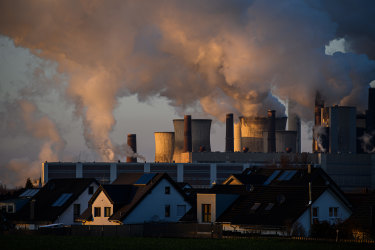 Steam rises from cooling towers at the Niederaussem coal-fired power plant in Germany. The electricity sector has low-carbon alternatives but other sectors are so far lagging.Credit:Getty

Pep Canadell, chief research scientist at CSIRO and executive director of the Global Carbon Project, said the main challenge remains cutting emissions but because the last 10-15 per cent of the effort to reach carbon neutrality would likely be “so incredibly difficult”, other technologies will be needed.

“It’s very reasonable to think that we can create new industries and also rejuvenate the biosphere,” Dr Canadell said. “There are plenty of potential wins if done well.”

So-called direct air capture machines that extract carbon dioxide remain in their early stages of development. Other methods could include mass afforestation or the development of so-called blue carbon sinks that foster new seagrass beds and other marine vegetation to remove C02.

“We need all the weapons,” Dr Canadell said.

Andy Pitman, head of the ARC Centre for Excellence for Climate Extremes, said there was considerable concern “across the climate community that emissions are not being reduced remotely fast enough”.

Professor Pitman said while the lower end of the Paris target of keeping warming to 1.5 degrees now appears unachievable, “2 degrees remains in play”.

Professor Abram also weighed in on this week’s revelation that UNESCO’s World Heritage Committee had recommended lowering the status of the Great Barrier Reef to “in danger” because of climate change.

Federal Environment Minister Sussan Ley has vowed to fight the change, claiming the move reversed earlier assurances the status of the World Heritage site would be unchanged.

The Great Barrier Reef lost about half its coral cover in three mass bleaching events in five years to 2020. Scientists, including at the reef’s Marine Park Authority, warn that global warming of 2 degrees will likely kill off the great bulk of the remaining coral.

The IPCC meets in early August, with the formal release of its Group 1 report scheduled for August 9.

Liam Mannix’s Examine newsletter explains and analyses science with a rigorous focus on the evidence. Sign up to get it each week.