Prime Minister Scott Morrison has rejected assertions he politicised the AUKUS security pact by informing Labor only a day before it was announced, while at the same time suggesting the opposition could not be trusted with the information.

The Sydney Morning Herald and The Age revealed on Saturday that 4½ months before the AUKUS announcement on September 16, senior members of the Biden administration insisted it would only consider pursuing the project if there was solid support from both major Australian political parties. 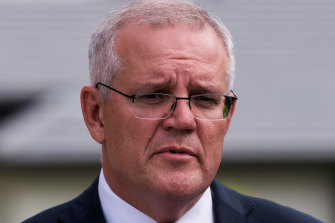 Campaigning in the marginal Queensland seat of Blair on Monday, the prime minister was asked whether he had misrepresented to the United States the bipartisan nature of the AUKUS agreement.

“We understood absolutely what the requirements were and we met them 100 per cent,” Morrison said.

However, the prime minister also suggested the opposition had been briefed only the day before the pact was announced due to concerns details would be leaked, as he lambasted Labor deputy leader Richard Marles over a report last week in The Australian newspaper that he had met with Chinese government officials on 10 occasions in the past five years.

“You’ve got the deputy leader of the Labor Party, who would have been sitting in such a briefing, who had frequent-flyer points for visiting the Chinese embassy in Australia,” Morrison said.

“I mean, seriously, this was one of the most secure and highly confidential agreements the Australian government had entered into since ANZUS.

“This was not something that I was going to be loose with and I wasn’t loose with it. When the opposition needed to be informed, then they were – just as other members of the government were informed at that time.”

Under the AUKUS defence technology sharing pact between Australia, the US and Britain to counter China’s growing influence in the Indo-Pacific, America agreed to help Canberra develop a nuclear-powered submarine capability. The deal opened a rift between Australia and France when the government subsequently cancelled a French contract for conventional submarines.

Responding on Monday to Morrison’s remarks, Labor leader Anthony Albanese rejected the insinuation the opposition could not be trusted with confidential information, saying he received national security briefings “all the time”. He accused the prime minister of always putting “the political interests first before the national interest”.

“The US administration … they expected there to be [a] briefing and expected there to be a condition [that there] would be bipartisan support. And I make this point, even though Labor could not have been more clear, more decisive or more certain about our support for AUKUS, this prime minister has continued to play politics and to suggest that that wasn’t the case at each and every opportunity,” said Albanese as he campaigned in Perth.

He said Labor was briefed the afternoon before the September 16 AUKUS announcement and subsequently held a meeting of the shadow cabinet and then caucus, which endorsed a position supporting the pact.

Herald editor Bevan Shields said the author of the AUKUS series that revealed the Biden administration’s request for bipartisan support, political and international editor Peter Hartcher, was one of Australia’s finest and most experienced journalists and the masthead stood by his work.

Cut through the noise of the federal election campaign with news, views and expert analysis from Jacqueline Maley. Sign up to our Australia Votes 2022 newsletter here.