Wedding musicians sue hotel, vendors after tent collapse: ‘I thought I was going to die’

Two musicians who were injured when a tent collapsed during an outdoor wedding last year are accusing the venue and vendors of negligence and are speaking out about their “terrifying” experience.

During the ceremony – which was on an outdoor terrace at the hotel – strong storms caused the tent covering the ceremony to collapse on the guests and vendors, including the string quartet.

Earlier this month, Ray and Crosby sued the hotel, its real estate management company, Tavistock Atlanta, as well as the tent company and the coordinator who was overseeing the event, after they suffered “serious injuries,” the lawsuit says.

In March of this year, another couple – who were guests at the wedding – also filed a lawsuit against the hotel, the tent company and the event coordinator. According to that lawsuit, a woman claims she was 32 weeks pregnant and suffered “severe physical injuries” after being pinned to the ground by a supporting beam of the tent. The couple, through their attorney, declined to comment for this story.

Attorneys for The St. Regis Atlanta also declined to comment.

The hotel’s real estate management company, Tavistock Group, did not respond to Fox News’ request for comment by the time of publication. Neither did Marriott International, which runs the hotel. 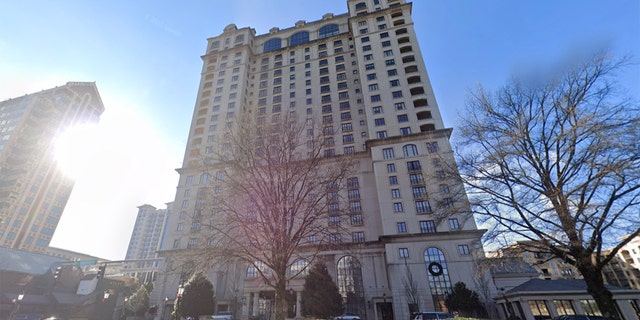 Ray, from Woodstock, Georgia, told Fox News that she and the rest of the string quartet “had no clue” the wedding was going to be outdoors on the hotel’s seventh floor terrace until they arrived on the day.

“We were all surprised,” Ray said, adding that they didn’t think too much of it and proceeded to set up and rehearse like they normally do for weddings.

Around the time the ceremony started, Ray said that it started to rain and get windy. At some point, they even needed people to hold the speakers and keep them from toppling over from the wind.

Clips provided to Fox News by the attorney representing the couple who were guests at the wedding show the moment when the tent collapsed during the ceremony and the panic that ensued from wedding guests as they tried to get inside.

A Jan. 13, 2020 report from local station WSB-TV found that several people were injured in the collapse and two people were sent to the hospital.

According to a statement from the National Weather Service (NWS) released after Jan. 11, 2020, there were severe thunderstorms that day, which caused “widespread wind damage to the area” and there were even three weak tornadoes that occurred “within the line of storms.”

“At the peak, over 150,000 customers across Georgia had lost electricity,” the agency said.

Though Ray and Crosby were able to make it out of the debris, Ray told Fox she suffered seven broken ribs.

Crosby said she’s been going to therapy for PTSD and her violin – which she has had for 20 years – was destroyed in the tent collapse, saying it was “in literal puzzle pieces.”

According to their lawsuit, the defendants should have moved the wedding inside and were therefore allegedly “negligent by failing to exercise ordinary care in keeping these premises safe and by failing to maintain a safe environment.”

According to the lawsuit, which was filed in the Fulton County State Court, Ray and Crosby are seeking the full cost of their “medical bills, property damage and lost wages.”