Woman, 35, desperate to be a mother reveals her husband’s stalling after promising he wanted to start a family – so, do YOU think she should leave him or freeze her eggs?

A 35-year-old woman who is concerned her husband no longer wants to have children has been urged to leave the marriage or freeze her eggs.

Posting anonymously on Reddit, the UK-based woman explained that her husband told her before they wed that he wanted children but has continuously made excuses to delay trying for a baby since they married almost five years ago.

The woman said her husband, 36, comes up with a range of excuses, including wanting to move city first and saying they ‘won’t have fun again’ once a baby comes along.

From freezing her eggs until a later date to ending the relationship, the woman was inundated with advice from posters to the thread who agree she shouldn’t sacrifice her desire to have a child – despite loving her husband. 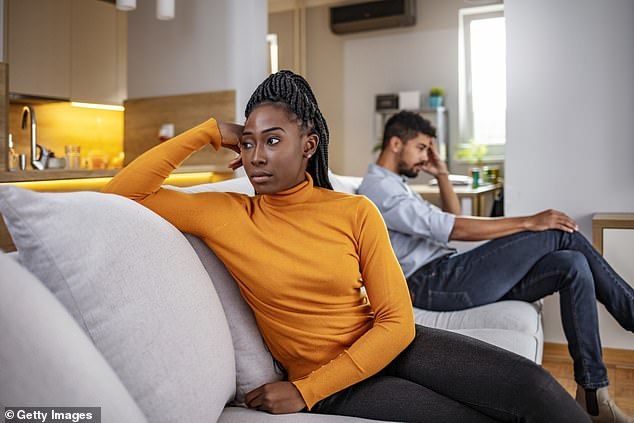 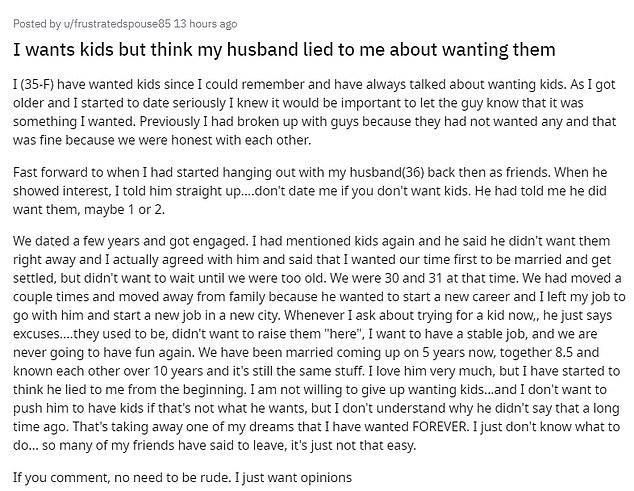 Posting on Reddit, the woman, 35, said her husband has been making excuses to avoid having children, despite agreeing that he wanted them before getting married

Frustrated with the situation, the woman wrote: ‘I have wanted kids ever since I could remember and have always talked about wanting kids…

‘Fast forward to when I had started hanging out with my husband, 36, back then as friends. When he showed interest, I told him straight up….don’t date me if you don’t want kids. He had told me he did want them, maybe one or two.

‘We dated a few years and got engaged. I had mentioned kids again and he said he didn’t want them right away and I actually agreed with him and said that I wanted our time first to be married and get settled, but didn’t want to wait until we were too old.

‘We were 30 and 31 at that time. We had moved a couple times and moved away from family because he wanted to start a new career and I left my job to go with him and start a new job in a new city.

‘Whenever I ask about trying for a kid now, he just says excuses….they used to be, didn’t want to raise them “here”, I want to have a stable job, and we are never going to have fun again. We have been married coming up on five years now, together eight and a half and known each other over ten years and it’s still the same stuff.’

She added: ‘I love him very much, but I have started to think he lied to me from the beginning. I am not willing to give up wanting kids… and I don’t want to push him to have kids if that’s not what he wants, but I don’t understand why he didn’t say that a long time ago.’

A stream of responses to the post agreed with the woman’s friends that she should leave the marriage and argued she doesn’t have the time to wait for her husband to change his mind because of her biological clock.

One person wrote: ‘Best case: he’s scared. Worst case: he lied. You don’t have time to waste. Tell him you’re done waiting. He’s either going to get his s*** together or you divorce him. Do not give him more time. There is no more time to give if you want biological kids.’

‘He’s just trying to run out the clock. He knows all he has to do is stall a few more years and you’re stuck. I’d tell him to either knock you up now or walk,’ another said.

Arguing the woman may have to compromise, a third added: ‘Frankly I think you let him string you along for far too long. At this point if you stay you may just need to be comfortable with the idea of not having kids.

Others urged the woman to consider having a child on her own, warning the quality of her eggs will get worse if she waits too long.

‘My opinion is focus on getting a good job and ditch the guy. He’s not going to give you what you want and he isn’t necessary for it to happen. Sperm donor, adoption etc. I hope you get the chance to be a mother,’ one wrote.

Another said: ‘This may sound mean but I mean no disrespect. You are a woman that is 35 years old, your biological clock is ticking. It will be harder to have kids, when you get older, however, the quality of your eggs would also drop.

‘So whatever you decide now, you have to stick to it. You can also freeze your eggs, but that depends on how old you want to be when your kids are 20.’