Woman reveals how she was lsexually assaulted by photographer

A woman who was told by police there wasn’t enough evidence to prosecute a man who posed as a photographer and sexually assaulted her has revealed how she felt  ‘jubilant’ when he was finally imprisoned.

Deborah Smith*, 32, from North London, was lured into a flat and sexually assaulted by Osman Saeed, 42, in 2014, before going straight to police who said there wasn’t enough evidence to prosecute.

But five years later, when Osman attacked another woman, Deborah gave evidence in the court case that put him behind bars for seven years, finally getting justice.

Deborah said she was ‘jubilant’ when he was put behind bars, but revealed: ‘I always believed that I wasn’t that horrible man’s only victim – I just wanted him stopped.’ 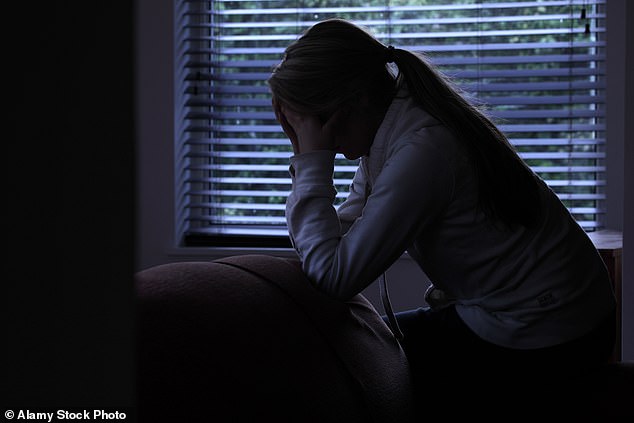 Deborah Smith, 32, from London, was sexually assaulted by a man posing as a photographer in 2014, but was told there wasn’t enough evidence to prosecute. Five years later, she was phoned after other women reporting his abuse and she gave evidence which helped put him behind bars (stock image)

Back in 2014, Deborah was working in finance also enjoying a hobby as a film and TV extra at the weekends.

She had a profile on the website Starnow.com, used by actors and musicians seeking work, and said she ‘loved’ her hobby.

She said: ‘I really enjoyed finding out more about how TV shows and films were made. It was fun for me.’

But she was contacted ‘out of the blue’ by Saeed who introduced himself as a photographer looking to build up his portfolio.

She explained: ‘He offered to take portrait shots of me for free, to use on my profile, in exchange for being able to use them on his own profile.

‘My profile photos were old and needed updating so, after thinking it over, I agreed to the photoshoot.

‘He sounded totally genuine and professional.’

The two agreed to meet, but on the agreed date Deborah ended up travelling to the wrong tube stop.

She realised her mistake and called Saeed to say she would be late, before he said he was short on time and offered to come and collect her from the tube station.

Deborah said: ‘We arrived at an old red-brick house, converted into flats. Osman’s studio was inside his flat. That’s not unusual, many creative people work from home.’

She went inside ‘with no qualms’  but texted the address of the property to her partner ‘as a precaution.’ 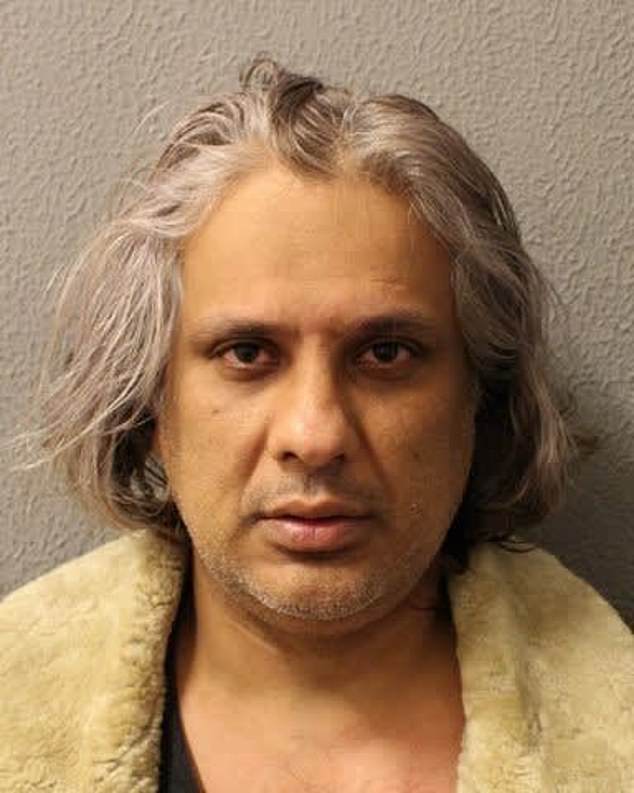 Osman Saeed, 42, was found guilty of sexually assaulting Deborah, as well as two other women, earlier this month

The two sat at a table to chat about the photoshoot, with Deborah noticing screens, cameras and lighting set up in the living area.

She continued: ‘Saeed offered me a drink, saying the alcohol could help relax a model before a photoshoot.

‘Until now, our conversation had been totally professional, all about the photographs we were going to do.

‘He showed me examples of his work on a laptop, and there were many pictures of other girls, which looked okay.

‘There was no flirting, and no inappropriate talk on his part, except I remember him asking me if I had a partner, which seemed irrelevant.’

Saeed poured her a drink of whiskey and coke before Deborah poured another.

She said: ‘Suddenly I started feel dizzy.  We were still at the table but I stood up, saying: “I don’t feel well. I need to go.”

‘But I couldn’t walk properly, just staggered a few steps and fell onto his sofa, where I passed out.’

After waking up, Deborah struggled to remember where she was before seeing she was still on the sofa at Saeed’s house.

She said: ‘Then I realised there Osman was kneeling next to me and he was naked. My top had been unbuttoned down the front, my shoes had been removed.

‘He was kissing my feet, and touching my lower legs.’

Deborah explained she ‘froze with panic and fear’ as Saeed began working his way up her legs.

She said: ‘I knew I must act quickly. He was a burly man, taller and stronger than me. I didn’t stand any chance of fighting him off.

‘I managed to sit up and told him, calmly as I could: “I need the loo.”

‘I didn’t make any reference to the fact he was naked or to what he’d been doing, and he reacted like nothing unusual was going on.’

Saeed sat back as Deborah got to her feet, before picking up her bag and shoes and going into his hallway and dashing to his front door and out into the street.

As she ran down the street, she was pursued by a naked Saeed, who shouted at her:  ‘Come back! This isn’t what you think! You’re over-reacting.’

Suddenly, Deborah saw two teenage boys walking towards her and she shouted for help, scaring Saeed off.

The boys waited with her while she put on her coat and shoes, before making her way to a pub nearby and phoned a friend to pick her up.

The next day, Deborah went to a police station to report what had happened, and gave a statement, but felt the reception was unsympathetic.

In Marrch 2020, Saeed, of Woodchurch Road, NW6 appeared at Snaresbrook Crown Court, charged with sexual offences against Deborah and two other women.

He denied everything, forcing his victims to give evidence.

The court heard how he lured women to his home for supposed photoshoots, then plied them with alcohol to carry out sex assaults.

The first incident happened in November 2012, when the victim replied to a website advert for a photoshoot. The photographer was offering to take professional photographs for free, which both parties could then use professionally.

At his home, Saeed told her that all the models he used would drink alcohol during the shoot to relax.

Eventually the victim accepted some wine, then blacked out. When she awoke, she was in her underwear on a bed, with Saeed taking pictures of her. He started touching her. Regaining her senses, she got up, dressed and left the flat.

In March 2018 the victim sought advice from the Sexual Assault Referral Centre and in late 2018 gave permission for a report to be made to the police.

The next incident (Deborah’s) was in 2014. Deborah was in the witness box for three hours, giving evidence about what happened to her, from behind a screen.

The last incident was in February 2018.

Police were called in the early hours after neighbours reported an argument coming from a flat.

Attending officers heard a woman crying and a male voice say words to the effect of: ‘I’ll let you go now.’

Officers entering the flat found Saeed and a distressed, intoxicated woman. Owing to her condition, she was taken to hospital, where she told the officers she’d responded to an offer of a photoshoot.

She described how Saeed pushed her and climbed on top of her and wouldn’t allow her to leave.

On Friday, 13 March, 2020, Saeed was found guilty of false imprisonment, common assault and three counts of sexual assault by touching against women, dating from 2012 to 2018.

Detective Constable Scott Sellars, investigating, said: ‘Saeed committed these offences over the course of a number of years, and when finally put before the court, his decision to plead not guilty, despite the substantial evidence against him, meant that the victims had to experience the trauma of reliving these events once again.

‘Saeed is a danger to young women. I am pleased that he is now off the streets… to prevent him doing harm to anyone else.

‘I want to thank the brave victims in this case, each of whom gave evidence during the trial because they wanted to protect other women from the suspect, with one even returning to the UK from her home country purely for the trial.’

Deborah recalled: ‘The police officer taking my second statement was brusque and impatient.

‘I could tell he had little interest in my story. It was like he thought I asked for what happened.

‘He went through the motions, telling me to leave it with him.’

For a month, Deborah didn’t hear anything before finally ringing the police station for an update and speaking to a female officer.

She revealed: ‘She told me: “We won’t be taking any further action. It’s just your word against his.”

Stunned, Deborah remembered all of the photographs she had seen of other women and worried that she wasn’t his only victim but ‘felt there was nothing more I could do about it.’

After the incident, she sought counselling from Victim Support, gave up working as an extra and tried her best to forget about it,

Then, in 2019, she got an unexpected phone call from a Met Police Officer, Detective Constable Scott Sellars who told her there had been another two complaints about Saeed and that the police wanted to press charges.

He asked for her help with the investigation, and another statement, which she said yes to ‘straight away’.

She revealed: ‘This time around, I was treated with kindness, care and respect. I’d say this latest investigation restored my faith in the police.’

Finally in March 2020, Saeed, of Woodchurch Road, appeared at Snaresbrook Crown Court, charged with sexual offences against Deborah and two other women.

He denied everything, forcing his victims to give evidence.

The first incident happened in November 2012, when the victim went through a similar experience to Deborah.

After accepting a drink at Saeed’s flat, she blacked out and awoke in her underwear in a bed, while Saeed took pictures of her and touched her.

Deborah went on to take the witness box for three hours, giving evidence about what happened to her, from behind a screen.

She says: ‘Standing in the witness box in court was difficult. This was a horrible incident that I never wanted to think about, again – now I had to go into every detail in front of a room full of strangers.

‘But it was necessary. I did it from behind the screen because I couldn’t bear to have to see that man’s face.’

The last incident was in February 2018, when police were called to Saeed’s flat by neighbours reporting an argument.

Attending officers heard a woman crying and a male voice say words to the effect of: ‘I’ll let you go now.’

Officers entering the flat found Saeed and a distressed, intoxicated woman. Owing to her condition, she was taken to hospital, where she told the officers she’d responded to an offer of a photoshoot.

She described how he pushed her and climbed on top of her and wouldn’t allow her to leave.

On Friday, 13 March, 2020, Saeed was found guilty of false imprisonment, common assault and three counts of sexual assault by touching against women, dating from 2012 to 2018.

He was sentenced to seven years.

Deborah said: ‘When the police rang to give me the verdict, I was jubilant. Saeed’s victims had been believed – the three of us finally had justice.’

She added: ‘I couldn’t help thinking he could have been stopped a long time ago, if only the police had been more sympathetic when I first reported him, in 2014.’

‘Now I want to put this thing before me. Sexual abuse can happen to anyone. Victims targeted by a predator and pervert are not the ones who are to blame for these crimes.’

Since the trial, Deborah has decided to start applying for film extra work, again.

* Deborah’s name has been changed to protect her anonymity.