SHEFFIELD: A far-sighted punter has won PS10,000 ($A18,600) after Judd Trump's victory in the World Championship saw a 21-year-old bet finally pay off.

Racing journalist Neil Morrice, 62, placed a bet on Trump to win the snooker showpiece in 1998 after seeing the then-eight-year-old play a frame against his son. 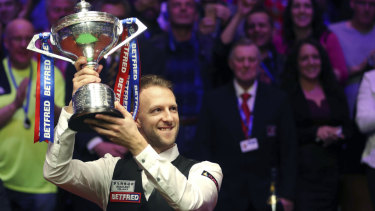 An ambitious punter was impressed by eight-year-old Judd Trump in 1998, and his faith paid off at 1000-1. Credit:PA

At the time the young Englishman needed to stand on a box to reach the table.

Morrice said he felt he had "seen something" when he first witnessed Trump in action against his 12-year-old son Richard.

"This little boy came up and said to Richard: 'Do you fancy a frame?' So Richard looked at him and said 'okay'. And the little boy said: 'I'll give you 20 start.'

"He used the cue more like a spear than a cue because he was so small, and he whacked down a 30 break. And I think with about one more visit to the table it was game over," Morrice said.

"Even at the age of eight they could tell he was something very special."

Following the encounter, Morrice called a bookmaker and was offered a PS10 ($A19) "fantasy bet" at 1,000-1 for Trump to become champion of the world by the age of 30.

The eventual victory was all the sweeter as this year's tournament was the last opportunity for Trump, 29, to ensure the bet came to fruition.