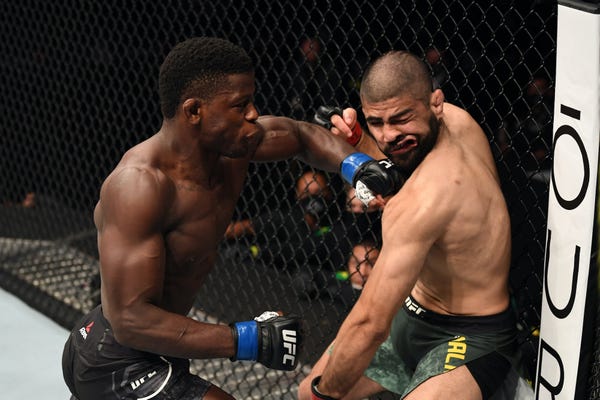 FIGHT ISLAND — An American middleweight stunned everyone on Fight Island with an 18-second knockout on his UFC debut Saturday.

Phil Hawes, 31, left little time to even break into a sweat as he defeated his 185-pound opponent in lightning-quick fashion, prompting the UFC commentary crew of Daniel Cormier and Jon Anik to react wildly.

Hawes hit Jacob Malkoun with a barrage of heavy hits from the start, refusing to cease fire until he had his man face down on the canvas.

Insider was sat press row at the Flash Forum in Abu Dhabi and could see Malkoun lay motionless for an uncomfortable amount of time, unbeknownst to Hawes who was celebrating rambunctiously around the Octagon.

It was a win as brutal as it was brilliant for Hawes.