As Tokyo looms, does the shoe still fit athletics?

On the day Nathan Buckley was shown the door at Collingwood, something far more unsettling happened in world sport.

At an athletics track in the Netherlands, an Ethiopian woman running in the 10,000 metres shattered a freakishly fast world record one of her countrywomen had set just two days before.

Normally, when such things happen in athletics, scrutiny immediately falls on what substances might be pumping through their blood. This time, most of the talk was about what they had on their feet: high-tech shoes radically changing running as we know it. 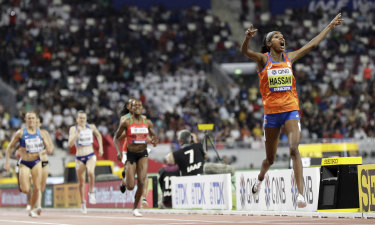 Ethiopian-born runner Sifan Hassan, who will compete for the Netherlands in Tokyo, is one of two women to shatter the 10,000m world record in as many days. Credit:AP

What began three years ago with Vaporfly, a Nike running shoe constructed with a carbon plate beneath the ball of the foot and a lightweight foam called Pebax in the heel and arch, has triggered a frantic race between shoe companies to maximise performance within a loose regulatory framework still being developed by World Athletics.

In the same way the Beijing Olympics, at the height of swimming’s super suit era, saw a staggering 25 world records broken in the space of a week, Tokyo is shaping as the Games where some of the most celebrated times in distance running will go to die.

Olympic marathoner Steve Moneghetti, a self-described traditionalist who says he would have been happy running in thongs, says he doesn’t like the focus on the new shoes but can’t deny the impact they are having on his sport. He remembers the first time he went running in a new pair. 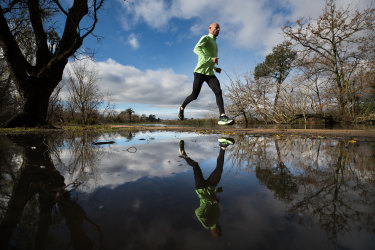 “I wore them, I didn’t like them but I ran faster over 10k than I know I could run,” he tells The Age and The Sydney Morning Herald from his home in Ballarat. His advice to people trying to make sense of distance events at Tokyo is to forget the times and enjoy the racing.

“When I raced, I took off my watch and left it in the call room,” the four-time Olympian says. “You know why? Because it was a race. I didn’t actually care what time I ran. It was man on man, woman on woman and it was pure running.”

From a parochial, Australian point of view, there will be plenty to watch in Tokyo.

Nic Bideau, a coaching guru of middle distance and distance running who is working with Athletics Australia to mentor our best Olympic prospects, expects that by the time qualifying is complete, Australia will have 28 entrants over distances between 800m and 42.2km. Of 37 athletes who have qualified so far for the Australian track and field team, 17 are middle distance or distance runners. 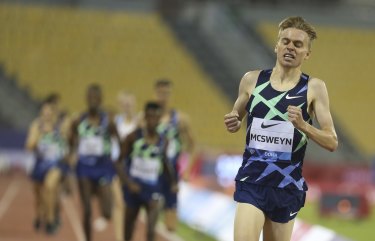 Stewart McSweyn, an emerging star in world athletics, has qualified for the 1500 metre, 5000 metre and 10,000 metre events in Tokyo.Credit:AP

The depth of the men’s team is most pronounced over 1500 metres, where Stewart McSweyn and Oliver Hoare are both ranked inside the world’s top 10 runners. The last Australian to win an Olympic medal in this event was Herb Elliott, 61 years ago. For the women, Sinead Diver is the fastest of four Australians to qualify for the marathon.

Bideau says there is no question that some runners are running faster partly because of the new shoes. One consequence of this is our middle and distance running team, which qualified for Tokyo against times set before the impact of the shoe technology was appreciated, is larger than it would otherwise have been.

However, Bideau says there is far more behind the renaissance of Australian running than pumped-up kicks.

He points to better training techniques, better coaching, stronger belief and a more competitive environment where athletes who want to be part of the team need to keep pace with runners like McSweyn. He says the test of this will be Tokyo.

“Where it should be judged is how they do,” he says. “If you make the Australian team, you should be able to be in the final. It is not good enough to go to the championships and get run out in the heats; that is not our standard any more.”

In October 2019, the running world’s collective jaw dropped when Kenyan Eliud Kipchoge, on a cool morning in Vienna, laced up a pair of custom-made Vaporflys and bounced his way to the world’s first sub-two-hour marathon. Australian marathon legend Robert de Castella likened it to running with springs on your feet.

The benefit of the shoes is they make running more efficient. The combination of a rocking motion, shock absorption and extremely lightweight materials means runners expend less energy on each stride and can hold their speed for longer distances. The greater the distance, the greater the advantage. 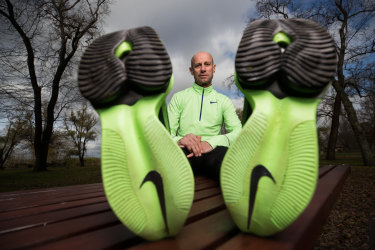 Steve Moneghetti, sporting a pair of new generation Alphaflys, says the shoes take about three seconds off every kilometre he runs.Credit:Jason South

Moneghetti, a Nike-sponsored athlete for 35 years, road-tested a new pair of next-generation Alphaflys for The Age and The Sydney Morning Herald.

He says although the raised heel is disconcerting, you feel the benefit at the end of the race, when your legs, instead of being pounded by the road, still have life. “If it encourages people to run more and they enjoy their running and are injured less, that is a good thing all round,” he says.

The shoe revolution spread into track running with the introduction of the Nike Dragonfly spikes. These were the shoes Ethiopian-born Dutch runner Sifan Hassan wore last week when she took more than 10 seconds off the astonishing 10-kilometre world record set by Almaz Ayana at the Rio Olympics. Hassan’s record stood for only 48 hours before Ethiopia’s Letesenbet Gidey sliced another six seconds off her mark.

To understand why these events are sending shockwaves through the sport, you need to trace the provenance of the women’s 10-kilometre record. For 23 years, it belonged to Wang Junxia, a Chinese runner coached by the notorious Ma Junren, whose opaque methods were widely assumed to involve systematic doping. When Ayana broke Wang’s record in Rio, she did it in such audacious circumstances — twice lapping other world-class runners — almost no one in athletics believed what they were seeing.

It is not just world champions who are running faster. The US college system is a proving ground for track and field Olympians. Between 2013 and 2019, only five college athletes ran 10,000 metres under 28 minutes. Four days ago in Eugene, Oregon, 10 men broke that mark in the same race.

Geoffrey Burns, a University of Michigan biomechanics researcher and ultra-distance runner, expresses discomfort at the way in which times, the essential currency of running, are being recalibrated in a sport resistant to technological change. He estimates that over 10,000 metres, shoe technology is reducing times by up to 30 seconds.

“Running was human performance distilled,” Burns says. “One of the fundamental appeals of the sport is that number on the clock is all of the athlete. Now, in a 1500, maybe a couple of seconds that are no longer on that athlete’s clock are entirely due to footwear. In a marathon, it is a couple of minutes.

“To me, that is uncomfortable. It is like having an uninvited guest at the party.” 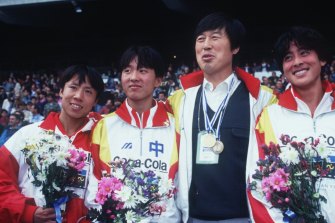 For now, World Athletics is treading lightly on regulation. Before Nike’s new shoes and comparable technology developed by adidas, New Balance and Hoka were made available to runners, the only restriction on shoes for track and road racing was that they couldn’t give an athlete an “unfair assistance or advantage”.

When World Athletics realised the new shoes were sorely testing this maxim, it set up an Assistance Review Group, chaired by Australian Brian Roe, to assess the emerging technology and develop a regulatory framework. In late 2019, the group reported back and recommended that shoe companies be brought in to help draft rules intended to preserve the integrity of the sport without discouraging technological innovation.

World Athletics president Sebastian Coe has placed the regulatory debate in a holding pattern until Tokyo. Whether athletics follows swimming, cycling and sailing in outlawing technology previously accepted in the sport will depend on what we see in six weeks.

Moneghetti says that in the meantime, the sport shouldn’t lose sight of everything else that makes one runner faster than another. “If anyone seriously thinks the shoes are going to make a difference to the result in an Olympic Games final, they are kidding themselves,” he says. 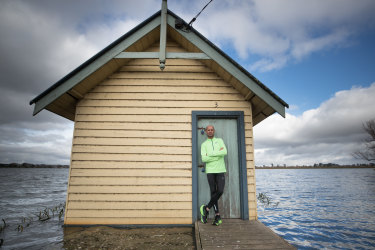 “What a fantastic race we are going to have in Tokyo if these two women are on the line. I’ll be watching the women’s 10k with more interest than the men’s 10k — unless Stewie is in it.

“I think recreational runners get more fixated on watches and Garmins and times but the general public doesn’t care. It is the performance at a championship that the public are really aware of now. They want to know what people do against the best in the world.”