Australia has been snubbed by SailGP after organisers unveiled the schedule for the next eight races.

The second season will begin with the Bermuda Grand Prix from April 24-25, a month after the end of the 36th America's Cup, and conclude with the United States Grand Prix in San Francisco, scheduled for March 26-27 in 2022. 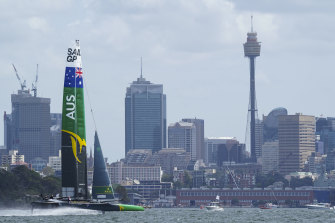 Tom Slingsby’s Australian boat on Sydney Harbour in the 2020 opener declared null and void following the outbreak of COVID-19.Credit:SailGP

Season 2 was initially scheduled for 2020, but events were postponed due to the COVID-19 pandemic and the results from the opening race in Sydney in February were declared null and void.

SailGP was set up in 2018 by Oracle founder Larry Ellison and America's Cup veteran Russell Coutts and culminates in a winner-takes-all $1 million prize.

The championship has been billed as sailing's equivalent of Formula One and uses the F50 catamarans, which have hit speeds of 50 knots (93 km/h).

The 2021-22 season has expanded from its five-race calendar last year, with races also to be held in Italy, England, Denmark, France, Spain and New Zealand. 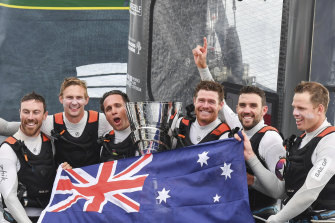 "There's rarely been a time in my lifelong sailing career when I've been as enthusiastic as I am about our upcoming season," said SailGP CEO Coutts.

"In just over three months, we'll have the world's best sailors lining up in equally matched boats for what is shaping up to be some of the sport's most competitive racing yet."

The new season will feature Tom Slingsby's reigning champion Australian team, along with teams from Denmark, France, Britain, Japan, New Zealand, Spain and the US.

Slingsby had campaigned for Sydney to retain its place on the calendar.

"The hope is Sydney will be on the calendar again and at the back end of the season so there's a bit more hype about it leading up to that $1 million race," he told the Herald in August. "We now have a New Zealand team and I'm hoping we don't lose the Sydney event to Auckland.

"We have the best sailing harbour in the world – and I can say that with my hand on my heart. The way it is showcased with the Harbour Bridge, the Opera House and how we use Shark Island as the spectator venue so we can get so close to the shore … it's like no harbour in the world.

"I think SailGP and the event we run here really showcases that to the world. It would be a real shame if we lost the event here."

The championship last year was suspended after the first race in Sydney, which was won by a British team led by four-times Olympic gold medallist Ben Ainslie.