The last time the Cleveland Browns and Cincinnati Bengals each had a good quarterback at the same time was probably Bernie Kosar and Boomer Esiason in the 1980s. Perhaps that’s changing.

Baker Mayfield, who had a rough season opener, rebounded nicely as the Browns picked apart the Bengals’ defense in a 35-30 win. But don’t blame Bengals quarterback Joe Burrow for the loss. The first overall pick had several impressive moments himself, and looks like he’s going to be very good.

Maybe the Browns-Bengals rivalry will be known for its great quarterback duels over the next decade or so. What a change that would be.

Mayfield, also a No. 1 overall pick, had a fantastic rookie season. Then, he struggled mightily last year. This season was likely to give us a good idea what type of NFL quarterback Mayfield would be, and the season opener at Baltimore was a pretty bad start.

Mayfield looked like a different quarterback on Thursday. Part of that was not having to contend with the Ravens’ defense. But he was more patient in the pocket and the accuracy he was known for at the University of Oklahoma was back. Baltimore is a very good team, and the Browns aren’t on their level yet. But they have to be able to look good against teams like the Bengals if they want to make something of their season, and that happened Thursday. Mayfield completed 16-of-23 passes for 219 yards, two touchdowns and one interception.

Odell Beckham Jr. caught an early touchdown pass. Nick Chubb ran well and got a couple scores, and Kareem Hunt was explosive, too. The defense came up huge with Myles Garrett’s strip sack and a fumble recovery at the 1-yard line right after Cleveland’s offense couldn’t punch it in on four tries from the 1-yard line. Mayfield did make one mistake, taking a shot to the end zone in the middle of the field and having it picked off. That allowed Cincinnati some life late in the game, and was a risky mistake Mayfield can’t continue to make. However, he and the Browns were otherwise sharp.

The Bengals hung in the game, losing a close one for the second straight week. They are still putting together pieces to help them be competitive, and it looks like they have the most important piece in place. 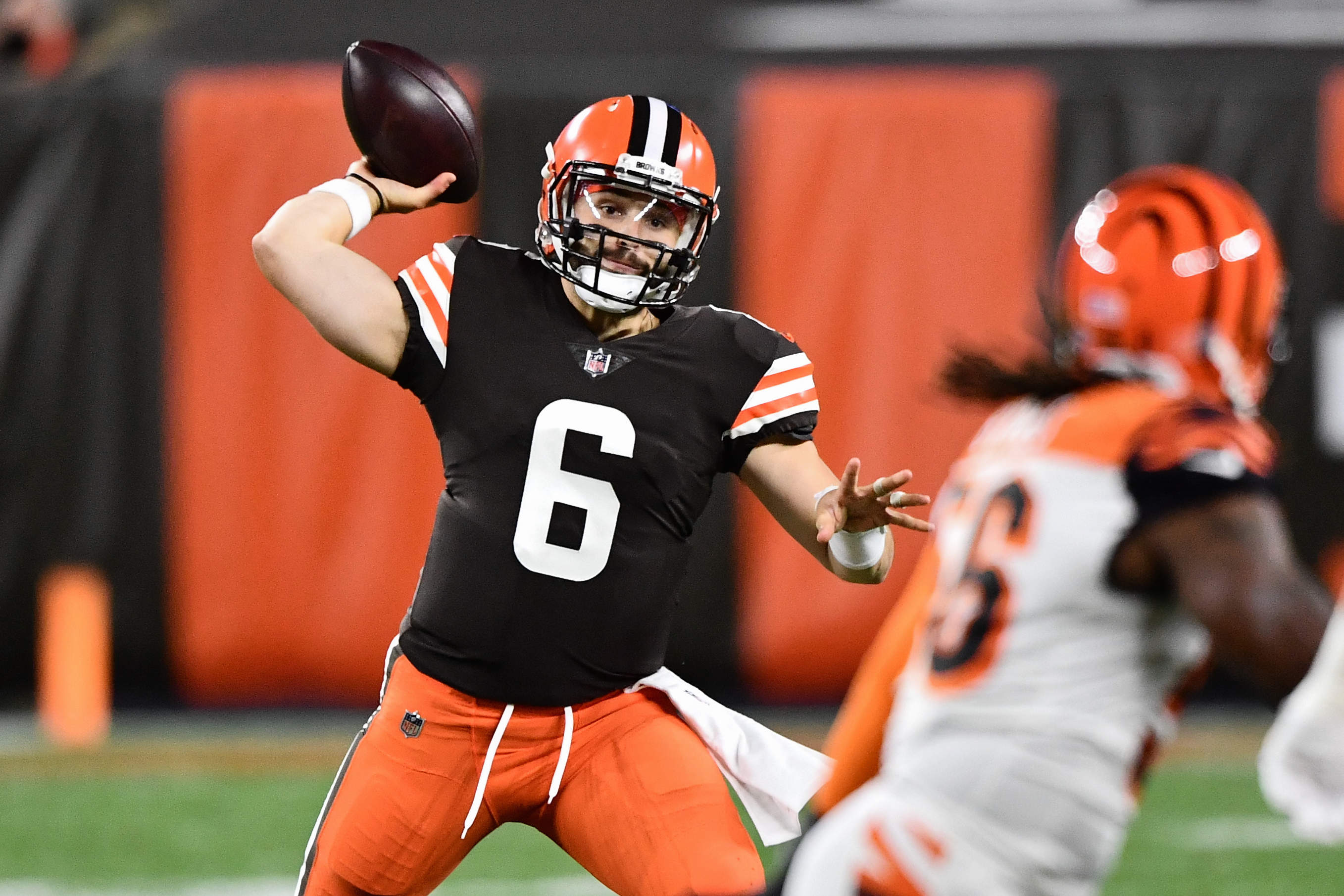 Burrow had a few rough moments, but that’s expected. He’s a rookie on a team that has a lot of holes, especially on the offensive line. But there were many more plays that showed why Burrow won a Heisman Trophy last season and was the top pick of this year’s draft.

FILE – In this April 14, 2018, file photo, Ohio State quarterback Joe Burrow drops back to pass during an NCAA college spring football game in Columbus, Ohio. Facing the possibility of sitting as a backup for a third season at Ohio State, quarterback Joe Burrow announced on Tuesday, May 8, 2018,his intention to transfer. The news from the redshirt junior, delivered via Twitter, wasn’t unexpected.(AP Photo/Jay LaPrete, File)

LSU quarterback Joe Burrow (9) passes for a first down against Mississippi State during the first half of their NCAA college football game in Starkville, Miss., Saturday, Oct. 19, 2019. In addition to LSU winning 36-13, Burrow threw four touchdowns to break the LSU season record with 29. (AP Photo/Rogelio V. Solis)

LSU quarterback Joe Burrow looks for an open receiver in the first half of an NCAA football game against Alabama Saturday, Nov. 9, 2019, in Tuscaloosa, Ala. (AP Photo/Vasha Hunt)Up Next

Burrow had some accurate throws, made a few pre-snap adjustments that were impressive as a rookie and showed off his athleticism, too. His first career touchdown pass, a pinpoint throw to C.J. Uzomah down the left sideline, got LeBron James’ attention. He led a nice fourth-quarter drive capped by a touchdown pass to Mike Thomas to cut Cleveland’s lead to 28-23. The Browns came right back with an impressive touchdown drive, capped by Hunt’s second touchdown to practically put the game away. Burrow got his third touchdown with 43 seconds left, but the Bengals couldn’t recover the onside kick afterward. Burrow should have had another touchdown in the third quarter, but Tyler Boyd dropped a sure score at the goal line. It was a positive day for Burrow, even in a loss. Burrow completed 37-of-61 passes for 316 yards, three touchdowns and no interceptions. He was impressive.

There will be many more losses for Burrow and the Bengals this season. They’re not a very good team. Brighter days are ahead it seems, thanks to their new quarterback. The Browns should feel more optimistic about their quarterback situation after Thursday, as well. The two Ohio quarterbacks should have some epic battles for a while.