Coates reminds Queensland Premier who is in charge

If the people of Brisbane want to know who will be running their Olympic preparations, they should watch the clip of John Coates’ shameless edict to Annastacia Palaszczuk in Tokyo just hours after the 2032 Games were awarded to their city.

Then they should read a spectacular take down of the Queensland Premier, sourced in part from Coates, published in Thursday’s edition of The Australian.

Palaszczuk told ABC television on Thursday she took no offence to Coates publicly directing her, like a school principal might a recalcitrant child, to attend the Tokyo opening ceremony. “I’ve known John for years,” she said.

To those familiar with Australia’s Olympic supremo, that is explanation enough.

Anyone who has worked with Coates, man or woman, will understand that Palaszczuk in the moment was both laughing and dying inside. Among his extraordinary talents for manipulating the born-to-rule bureaucracy of the IOC and bending the will of state and federal governments to his ends, Coates has an Olympic-sized capacity for humiliation.

Palaszczuk, from her close and extensive dealings with Coates on the Brisbane bid, understands that only too well. Her Queensland electors should also know that, having been gifted an Olympic Games through a selection process designed by Coates, who excused himself to avoid conflicts of interest when appropriate, they will be paying the piper for years to come. 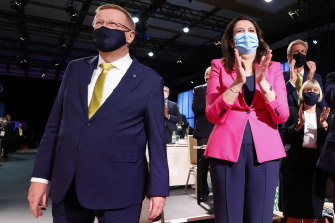 Only John Coates, sitting arms folded at a press conference, would take it upon himself to declare how Palaszczuk, a woman twice elected as Queensland Premier, is going to spend her Friday night in Tokyo.

“You are going to the opening ceremony,” he told her. “I am still deputy chair of the candidature leadership group and so far as I understand there will be an opening and a closing ceremony in 2032 and all of you have got to get along there and understand the traditional parts of that, what is involved in an opening ceremony. None of you are staying and hiding in your rooms. Alright?”

When a reporter asked the Premier whether she indeed was going, Coates cut her off before she could answer. “Bloody oath she is going, I have just told you!”

At the time, the room laughed, rather than recoiled. The ABC spliced an out-of-sequence video package for its News Breakfast program which suggests there was an awkward silence between the pair. There was nothing of the sort.

Through the laughter, Palaszczuk can be heard saying: “I’m getting bossed around by John Coates? Hang on a minute …”

Palaszczuk’s widely broadcast comment that she didn’t want to offend anyone came about 20 minutes later, when the issue of the opening ceremony was revisited.

If the Queensland Premier wasn’t angry then, she would have been furious when she got back to her Tokyo hotel suite and read what Coates told The Australian about her.

Published under the headline “How Palaszczuk almost blew the Games bid,” the story by Jacquelin Magnay, a respected and well-connected Olympics reporter, portrays the Queensland Premier as a bumbling, parochial state leader who nearly stuffed the whole thing up.

The central premise of the story is that Palaszczuk’s public lobbying of the federal government in April for more money to pay for an extra 8000 seats at the Gabba, the main venue for the Brisbane Olympics, nearly split the group working on the bid and damaged Queensland’s prospects of securing the Games.

As Coates told Magnay: “I thought she might have blown it.”

Coates told the same story to other members of the Brisbane delegation which flew into Tokyo for Wednesday’s final pitch to IOC members.

Whether Palaszczuk’s short-lived dispute with the feds over a relatively minor detail of the bid did any harm to its chances is a matter of conjecture, and now academic. The barely disguised message from Coates to Palaszczuk is clear: You may have the Games, but don’t forget that you’re not the only one in charge of them.

Coates has dubbed Brisbane the “together Games” but tensions between Coates, the Australian Olympic Committee and the federal and Queensland governments will shape the Games preparations for years to come.

The next significant flashpoint is likely to be the make-up of the Brisbane organising committee. Palaszczuk has said she will legislate to form a committee by the end of the year and that she expects it to be gender diverse.

Coates can recite verbatim the clauses within Brisbane’s freshly inked contract with the IOC, signed by Palaszczuk and Coates, which stipulates that Australian IOC members must be offered positions on the committee, along with the AOC president and two athlete representatives.

If the Sydney experience is any guide, Coates will care less for gender diversity than trying to fill the committee with his picks. Any committee which counts Coates as a member will not be run, in one way or another, without Coates.