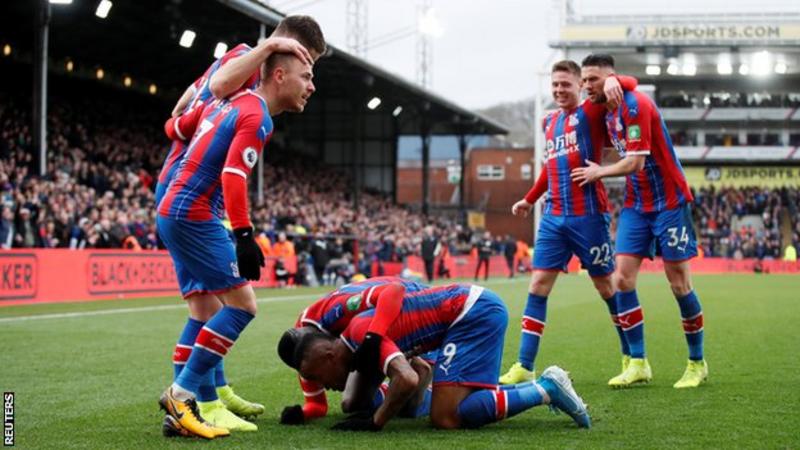 Jordan Ayew’s deflected equaliser earned Crystal Palace a point at home against Arsenal, who had goalscorer Pierre-Emerick Aubameyang sent off by the video assistant referee (VAR).

Captain Aubameyang had put his side ahead with a well-worked team goal as Mikel Arteta’s side dominated the first half.

Aubameyang was then sent off following a lunging tackle which caught Max Meyer on the left ankle, VAR overturning the initial yellow card he was awarded by referee Paul Tierney.

This fixture had heralded 28 goals in the previous seven meetings between the two sides but little could separate them this time around, though both James Tomkins and Nicolas Pepe went close to winners for their respective teams.

The Eagles could consider themselves lucky to end the match with 11 players with Tomkins narrowly avoiding a red card after a late challenge on Gabriel Martinelli, in what was a feisty first London derby of 2020.

Arsenal manager Arteta – who was not even born when Palace boss Roy Hodgson started his managerial career – remains without an away win in the league since taking over as manager on 20 December.

Palace, meanwhile, remain ninth in the Premier League table, one place above the Gunners.

Just seven days ago, Arsenal had been stunned by a dominant Leeds United in the first half of their FA Cup third round win, but the opening 45 minutes at Selhurst Park couldn’t have been more different.

Unchanged from the win over Manchester United on New Year’s Day, they dictated the opening exchanges at Palace, enjoying almost 80% of possession during the first 10 minutes.

That was rewarded when clever link-up play between Luiz, Mesut Ozil and Alexandre Lacazette helped Aubameyang open the scoring, a punt from Lacazette putting the Gabon striker through with only Vicente Guaita to beat for his 14th league goal of the season.

After the break, Luiz could do little about his helping hand in Palace’s goal but he almost immediately made up for it, heading onto the roof of the net from a corner.

But Arsenal suffered a huge blow when top scorer Aubameyang was sent off for the tackle that left Meyer unable to continue, loan signing Cenk Tosun coming on in his place.

There was an audible gasp inside Selhurst Park when a replay was shown on the big screens after the VAR decision had been made.

Pepe thought he had hit the winner with 10 minutes remaining but his blistering left-footed effort was superbly tipped on to the post by Guaita who then spread himself at the feet of Lacazette when the ball rebounded back into the middle of the penalty box.

In the end, this match echoed the last time these teams met, Arsenal letting a two-goal cushion slip as Palace fought back to draw 2-2 in October. Arsenal have now failed to win five league matches this season after leading at half-time. 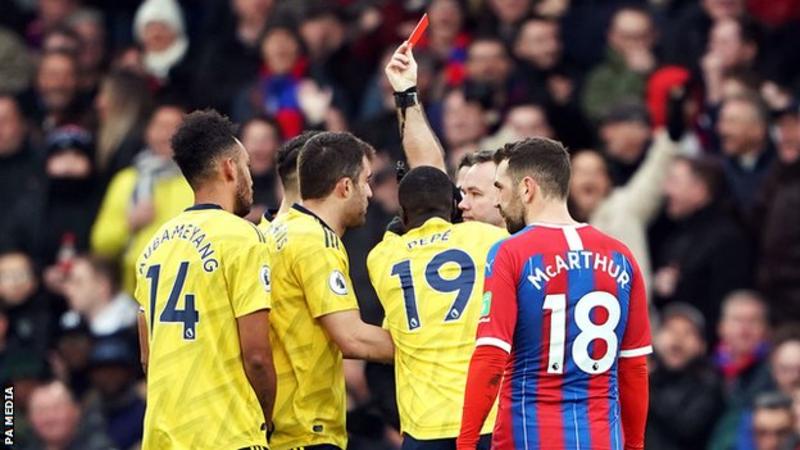 Injury-hit Palace came into this match above Arsenal in the Premier League table, having lost only one of their previous eight league matches, but looked far from settled as they struggled to cope with their revitalised opponents in the first half.

Their frustration was evident but they started to show signs of getting back into the game later in the half, having a penalty appeal waved away after claiming Cheikhou Kouyate’s attempted cross struck Luiz on the arm. Kouyate then went close to an equaliser as half-time approached, his powerful effort parried away by Arsenal keeper Bernd Leno.

Hodgson’s side started the second half just as they had finished the first, and deserved Ayew’s equaliser.

Played in by Kouyate, Ayew’s effort took a huge deflection of Luiz’s boot as he became the first Palace player to score home and away against Arsenal in a single season since John Craven during the 1971-72 campaign.

Prior to the match, anti-VAR t-shirts had been sold outside Selhurst Park and Palace fans displayed a banner stating it was “killing the game”, yet it was the hosts who benefitted from the technology when Aubameyang was dismissed, handing them a man advantage.

They tried to make it count too, with Tomkins – captain in the absence of the suspended Luka Milivojevic – having a header cleared off the line.

Tomkins was booked after a poor challenge on Arsenal substitute Gabriel Martinelli, while Wilfried Zaha had a penalty shout waved away as the clocked ticked over into injury time.

The draw means the Eagles have now lost only one of their 14 league fixtures this season against teams below them in the table. 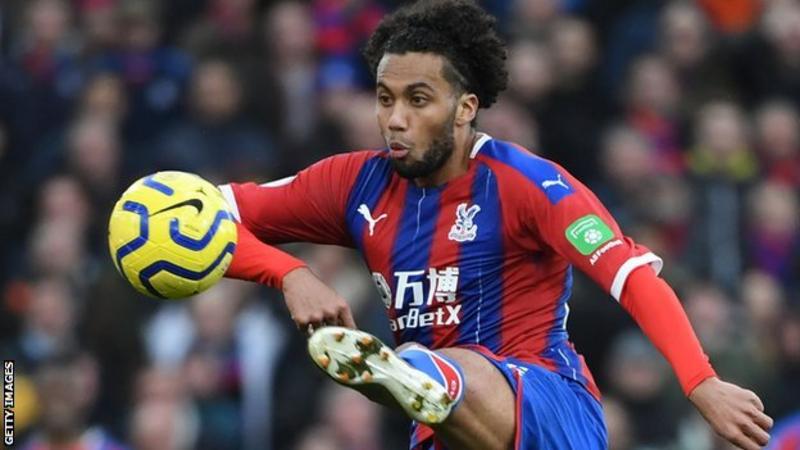 ‘I thought we were good value’ – what they said

Crystal Palace manager Roy Hodgson, speaking to BBC Match of the Day: “The first third of the game wasn’t much fun to watch. We weren’t getting very close to them and we weren’t getting possession. They’re a very technical team.

“The players did exceptionally well. We realised we’ll have to give up some of our protection – we did that and it started to fit into place for us.

“In the last two-thirds of the game I’m really delighted with the team. I thought in terms of general play and the amount of questions we were asking, I thought we were good value for the point.”

Arsenal manager Mikel Arteta, speaking to BT Sport: “The first 35 minutes is exactly what I want our Arsenal team to play like. We were dominant in the right positions and created chances. After that we started to give free-kicks and give balls away.

“In the first 15 minutes of the second half, credit to them because they pushed. They started to put men up front and we struggled. We switched off completely for the goal and that’s unacceptable.

“I don’t think we let our concentration slip. To control Palace for 90 minutes here is impossible. They put balls in the box and you have to defend the situation.”

On Aubameyang’s red card: “I haven’t seen it, but I think it was a harsh challenge. There was no intention, but I think he mistimed it.”

Attempt missed. James Tomkins (Crystal Palace) left footed shot from outside the box is high and wide to the left following a set piece situation.

Gary Cahill (Crystal Palace) wins a free kick in the defensive half.

Jordan Ayew (Crystal Palace) wins a free kick in the defensive half.

Attempt missed. David Luiz (Arsenal) right footed shot from more than 35 yards is too high from a direct free kick.

James Tomkins (Crystal Palace) is shown the yellow card for a bad foul.

Gabriel Martinelli (Arsenal) wins a free kick in the attacking half.

Cenk Tosun (Crystal Palace) wins a free kick in the defensive half.

Attempt saved. Alexandre Lacazette (Arsenal) right footed shot from very close range is saved in the centre of the goal.

Attempt saved. Nicolas Pépé (Arsenal) left footed shot from the left side of the box is saved in the bottom right corner. Assisted by Alexandre Lacazette.

Sead Kolasinac (Arsenal) wins a free kick in the attacking half.

James McArthur (Crystal Palace) wins a free kick in the defensive half.

Wilfried Zaha (Crystal Palace) wins a free kick in the defensive half.

Attempt blocked. Granit Xhaka (Arsenal) left footed shot from the right side of the box is blocked.

James McCarthy (Crystal Palace) is shown the yellow card for a bad foul.

Gabriel Martinelli (Arsenal) wins a free kick in the defensive half.

Max Meyer (Crystal Palace) wins a free kick in the defensive half.