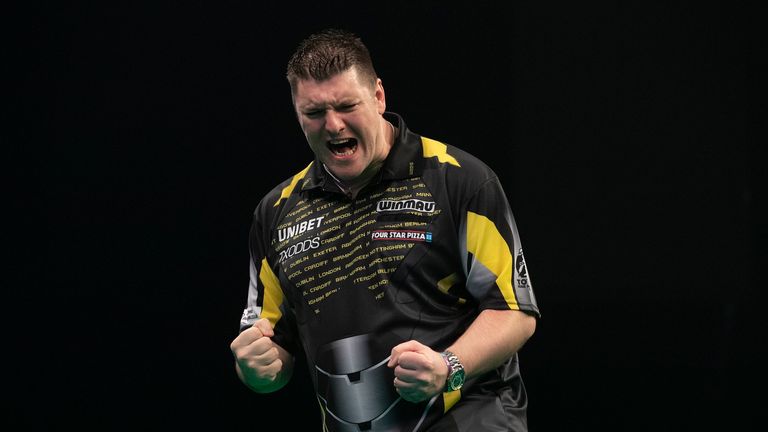 It started with Gerwyn Price and Gurney chalking up wins in the first two matches, which put the pressure on those who held top-four places heading into the night’s action – Mensur Suljovic and James Wade – and only one of those was to hang on.

Having finished top in each of the last six league campaigns, Van Gerwen beat Suljovic and was then reliant on table-topper Cross dropping points in the final match of the night to hand him a seventh. And he did when Wade chalked up an impressive 8-6 win that denied Cross the £25,000 leader-phase winners cheque in a dress rehearsal of their scheduled semi-final next week.

Gurney was the first to book his Play-Off place, and a London debut, with a brilliant win over Michael Smith that, coupled with Van Gerwen’s first four legs against Suljovic, meant Superchin could not be overhauled – news that reached him in the press room, much to his delight.

Wade’s place was then secured before he even took to the oche in the final match of the night as Van Gerwen claimed three more legs against Suljovic to secure a point, denying the Austrian the win he needed for a place in London himself and keep Van Gerwen in the hunt for top spot, which he secured.

After 16 nights zig-zagging across the UK, Ireland and Europe, the semi-finals are now set for The O2 where Gurney and Van Gerwen will go head-to-head with Superchin knowing he has two wins over the Dutchman in the Premier League this season.