There are, as the saying goes, pretty much only two types of coaches: those who have been sacked, and those who will be sacked. Des Hasler, of course, moved from the latter to the former category on Thursday. For such a Manly man – two premierships as coach, two as player – it seems such an incongruous and unworthy end.

Does anyone make the case that he can’t coach? If that is the case, how on earth did he coach them to two premierships, and have them in the final four just last year?

Did he handle the rainbow pride jersey saga badly, then? True, Manly did not win a game since that imbroglio, but to my eyes Des Hasler was the only one who stepped forward and owned the whole thing when you couldn’t see anyone else at Manly for dust. Seriously, who else do you remember owning it, as the cameras rolled?

Has he lost the dressing room? Obviously not the ones who count, starting with Daly Cherry-Evans and the Trbojevic brothers – as they have all stood four-square with him and to this point no player at all has put his name to even the mildest critique of Hasler, not even as background that I have seen. As to the Manly fans, In Des They Trust.

Maybe he’s just not Manly enough? Actually, given that he played in and coached the team across an extraordinary 559 matches, you’d have to say there is no-one bar Bobby Fulton who has contributed more to the joint.

So just why was Des destined for the deep six? I can only offer realpolitik. That is, when everything turns to shite, and something has to give, whatever the rights and wrongs, the whys and wherefores, the last one left standing is always going to be the most powerful person, not the best. And when Manly is owned by an individual, in this case Scott Penn, he is automatically the one who will win in a tussle. 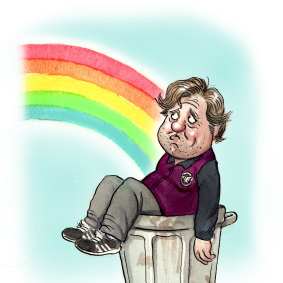 The Manly Seven rainbow jersey fiasco was the beginning of the end for Des Hasler.Credit:John Shakespeare

I repeat. It is such a pity, for such a good man, with such a record at his at Manly to be shown the door in such an ignominious manner. As to the Manly Seven . . . nice work.

As discussed TFF spent Tuesday evening at a tight dinner discussing issues of concussion with, among others, three famous former rugby league players. This included Mario Fenech, who recently opened up on Channel Seven’s Spotlight program about his own issues of having suffered brain damage from concussions during his career.

In person these days Mario is precisely as portrayed on Spotlight: garrulous, charismatic, very repetitive in his conversation, amazingly open about his woes, extremely grateful to his endlessly supportive wife Rebecca and . . . badly damaged. 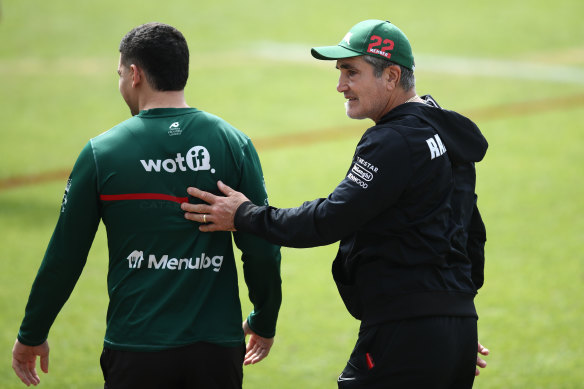 When I asked him if there were many former players out there just like him, he replied: “Is a fish’s arsehole water-tight?”

On any other subject I would have laughed uproariously at the colour of the phrase. But it’s clear he’s right. All the players, and their wives, spoke with great warmth about the help they have received in finding a way forward at the hands of Dr Rowena Mobbs, who runs a program at Macquarie University called Concussion Connect, which brings together those who are suffering from too many concussions into support groups, and allows them to more easily connect with the experts. Another contact is at the Australian CTE Bio Bank.

It is not just for famous sportspeople. Reach out if you or someone in your family is suffering from repeated concussions.

TFF has recently become a devotee of a Twitter site called @Fesshole, where – although it can be a bit vulgar, so be warned – people anonymously make strange and quirky confessions and tell light stories of their lives. The following example has just enough of a tangential sporting angle to recount in this space: “My boyfriend told me he’d really like to try [a] drag race. So for his birthday I got us VIP tickets to a drag show, we met the queens, he even got the chance to dress as a queen and go on stage with them. He went along with it all but later told me he actually preferred motorsport.”

Josh Addo-Carr is onto something, calling on the Kangaroos to develop an Australian version of the mighty haka.

“The All Blacks do it, even though they are not all Maori,” he told AAP. “Me, Latrell and Jackie [Wighton] would love it. There’s things we can do to modify it for some of the boys that don’t know how to dance, there’s a lot we can do so everyone is a part of it. We’re all Australian and that’s what this is all about, togetherness. That’s what my culture is about: respect. It would be mad to have it, we could get some elders in and some professional dancers to help create something special.”

Their starting point could be what the Indigenous All Stars did in February when about to play the Maori All Stars. It was a great performance, which clearly pumped them up, brought the crowd to its feet in a full-throated roar, and gave a sense that our mob have not been here for 120 years, or 200 years, or 250 years. Nup. Our mob have been here for 60,000 years and that performance was a reminder of it. How fabulous if, instead of a one-off, it could be developed into something all the football codes, and other sports, could embrace before internationals

To the unknown, little girl skater and her coach, Thursday morning at Macquarie Rink: I happened to be there and saw, as you tried and tried to land your flying spin. Each time you fell on the unforgiving ice, you got straight up and tried again, fearless. Nine times I saw you fall, and once you got it. You were an inspiration to anyone watching, as was your coach, who stuck by you, encouraged you and believed in you. You are the best of the human spirit, like every artist who was misunderstood, or farmer who faced a drought, or pioneer who took a chance. Never give up – you’re the future of the nation, and a success already.

Say it after me. Gotta love this city!

ABC Breakfast sports presenter Tony Armstrong – the fastest rising media star in the country – told ABC’s Take 5 with Zan Rowe of his best memory playing AFL: “I didn’t have many good moments on the footy field, but we were at the MCG, we were playing a grand final rematch against the Hawks in 2013. There were like 75,000 people in the MCG, it’s packed. I pick the ball up at halfback, dodge someone, then hit Goodesy with this 55-metre kick. It was like the only time I ever stopped and smelt the roses. I was like, ‘This is pretty cool I’ve just kicked it to Goodesy.’ He’s like Aboriginal superman. The guy is the best.”

Barrie Cassidy responds on Twitter to a story in The Age reporting “the Catholic Archbishop of Melbourne is no longer an Essendon supporter as he and other faith groups see a growing intolerance for religion in public life: “On the 10th anniversary of a famous speech I think the LGBTQ community is entitled to say: ‘I will not be lectured about intolerance by this man’.” Genius.

Ben Simmons on being clickbait: “And it doesn’t f—ing stop. Sometimes I’m even sick of it, but then I’m like, ‘OK, I’m Ben Simmons, you know? It comes with being Ben Simmons right now.’ F—, we’re interesting people I guess. Some guys you wouldn’t talk about because you just don’t care.”

NFL Commissioner Roger Goodell on updating the concussion protocols: “We understand some of that chatter, but the reality is the protocols are really important. We follow that strictly. We see no indication that that didn’t happen in this case. There’s an ongoing investigation.” Blah, blah, blah.

Cameron Munster on not calling Wayne Bennett to tell him that he wouldn’t be going to the Dolphins: “It’s disappointing. I have a really good relationship with Wayne, and I don’t know if I’ve made it any worse . . . there’s no excuses, I should have given him a call.”

Golden State Warrior veteran Draymond Green on hitting teammate Jordan Poole in practice: “There’s a huge embarrassment that comes with [this] . . . If my mother saw that video, I know how my mother would feel. I am a very flawed human being. I failed as a leader. I failed as a man.”

James Moffat didn’t like the Sunday driving of Brodie Kostecki at Bathurst: “It was probably going OK for us until Brodie drove like a dickhead at the Cutting and turned us around.”

English rugby league star Bobby Goulding, 50, says he first suffered symptoms of dementia in his 30s: “When the specialist said, ‘You’ve got early-onset dementia,’ [Goulding’s wife] Paula and I both started crying. I keep forgetting things. The other day I went to get something to eat and, without thinking, I took my teeth out and put them in the fridge. I couldn’t find them for 24 hours.”

Craig Tiley on the possibility of Novak Djokovic coming to the 2023 Australian Open: “At this point … Novak and the federal government need to work out the situation and then we’ll follow any instruction after that.”

Team of the Week

Des Hasler. “Well,” as Will Ferrell would say, “that escalated quickly!” The fallout from the pride jersey continues as Des was sacked on Thursday just four games shy of equalling Bob Fulton as longest-serving Sea Eagles coach.

Matildas. Their win over Denmark was their first over a top 20 nation in a year.

Mohamed Salah. The Liverpool player scored a hat-trick of goals in the Champions League in just six minutes.

Goulburn Rugby Club. Will be celebrating its 150th anniversary next Saturday – the oldest rural rugby club in Australia.