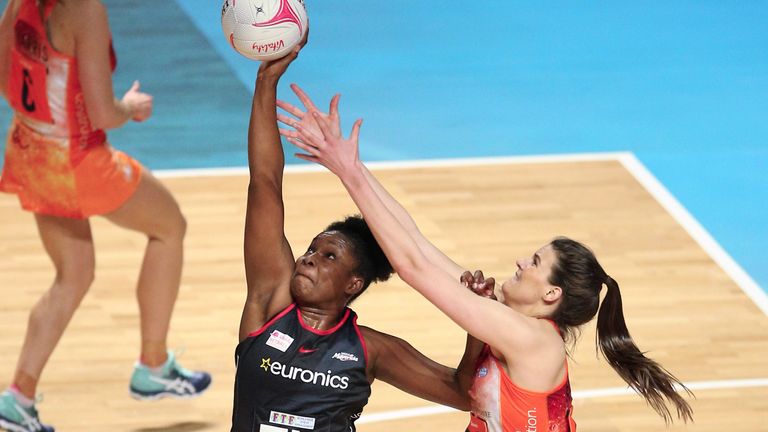 The announcement of the franchise’s internationals marks their first during the league’s transfer window as they reveal their squad in a unique way.

The franchise’s 15-player squad will be shared across four different days with the next being their ‘Rookies’ on October 20. After that, head coach Kat Ratnapala will highlight her ‘Returners’ on October 23 and finally a ‘Rockstar’ on October 29.

Mavericks have been in England’s elite netball competition for 15 years and have been open about the toll that the cancellation of the 2020 Superleague season has had on their finances.

Corbin, a Commonwealth Games gold medalist, is returning to bring a wealth of experience into Saracens Mavericks’ shooting-end and provide a great deal of energy to the playing group.

“Not leaving this team any time soon, you’re stuck with my crazy self,” Corbin said on social media about re-signing for the franchise.

Alongside her will be Gibson, a player that all fans will be pleased to see, as she returns to a netball after a long-term injury.

The Vitality Rose will be sharing more about her injury journey with Sky Sports in the build-up to the first Test in New Zealand and cannot wait to run out for Mavericks next year.

“I am so excited for my second season with Saracens Mavericks,” she said. “I’m still eagerly waiting to make my on-court debut and I cannot wait until that moment.”

In the franchise’s mid-court, the return of Marshall will set their tempo and workrate. Her movement and vision are up there with the best in the league and she’ll return from New Zealand with even more experience under her belt.

Finally, Mavs’ defensive end will again be fortified by the presence of Quashie, one of the country’s most-exciting and dynamic circle defenders.

“I’m back,” she said. “Five seasons, five years with Mavericks and what a time it has been.

“I’m so excited to step back out on court with the girls, picking up where we left off from last season.

“I’m keen to keep developing as a player and maintain my relationship with my team and am grateful for their support over the years.

“I am so proud of wearing the black and red dress on court to show my pride; pride in Mavericks and pride in having the most supportive and dedicated fans.

“While I am disappointed that we did not get to see through the 2020 season 2021 is our year,” Quashie added.

“We will continue to develop as a team and hopefully achieve a top four spot. Stronger Together. Mavericks.”