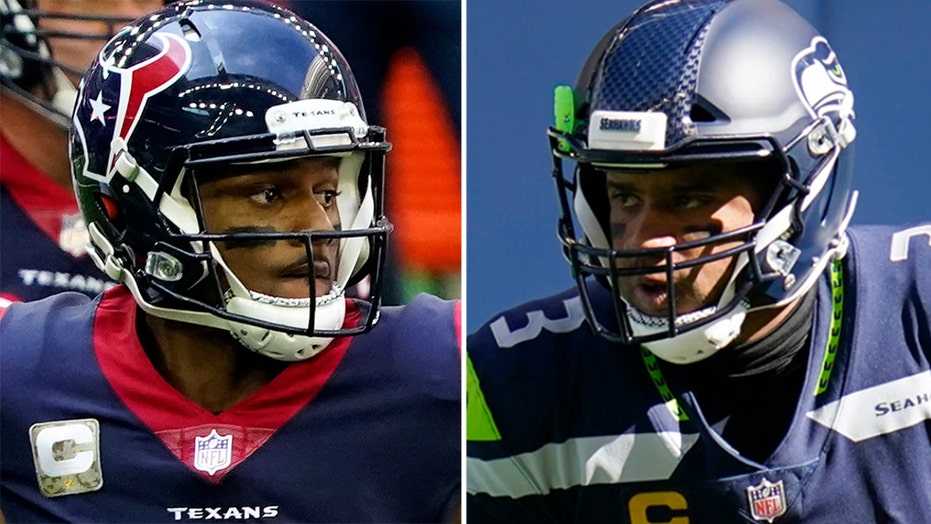 The wheeling and dealing in the 2021 NFL offseason has been one to remember as several quarterbacks have been traded with a few more appearing to be on the way out. For a football lifer like June Jones, it’s not sitting well.

The longtime NFL coach spoke to Fox News in a phone interview this week about the media frenzy that has followed Houston Texans quarterback Deshaun Watson and Seattle Seahawks quarterback Russell Wilson as both veterans have publicly expressed their frustrations with their respective teams during the offseason.

Jones, who spent several years as the Atlanta Falcons assistant head coach before taking over fully in 1994, said that while it’s perfectly normal for players to want to move on from their current situations, a business like the NFL is best handled behind the scenes. 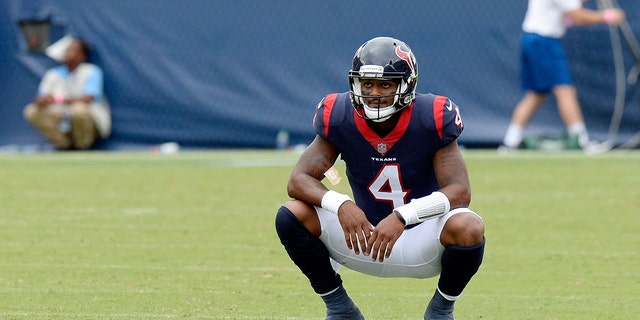 Houston Texans quarterback Deshaun Watson pauses on the field after time ran out in the fourth quarter and the Texans’ final drive ended in an NFL football game against the Tennessee Titans.
(AP)

Watson has not publicly come out demanding a trade from the Texans but several reports have indicated that he will hold out until he is traded. In January, he appeared to remove any reference to the Texans from his social media pages.

The tipping point for Watson appeared to be when the team hired new general manager Nick Caserio without his input. The hiring of new head coach David Culley thereafter had no effect on Watson’s desire to be traded, according to multiple reports.

He even posted a cryptic message on Twitter, fueling rumors further.

“Loyalty is everything. Don’t you EVER forget it,” he wrote.

Despite the organization’s attempts to squash the rumors, Jones believes there’s only one option to remedy the situation.

“I think (Houston) is going to be forced to trade him because he’s willing to hold out which I don’t think benefits anybody.”

The former coach, who began his NFL coaching career with the Houston Oilers and the Detroit Lions before serving as head coach of the Falcons from 1994-96, followed by a brief stint with the San Diego Chargers, also spoke about the situation in Seattle where unlike Watson, Wilson has aired his frustrations.

“His comments that he made in Seattle, I see it hard for him to go back to Seattle and have his old line play for him. So I would anticipate that he is probably going to get traded,” Jones said. 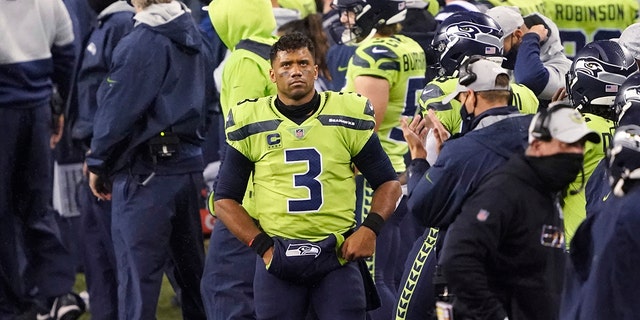 Seattle Seahawks quarterback Russell Wilson (3) looks up as he stands on the sidelines against the Minnesota Vikings late in the second half of an NFL football game, Sunday, Oct. 11, 2020, in Seattle. (AP Photo/Ted S. Warren)

Rumors of Wilson’s discontent were legitimized last month when he vocalized his own frustrations during a press conference with reporters.

“I love playing for the (Seahawks), I’ve loved it for years and lay it on the line every game and I’m dedicated to that,” Wilson said at the time. “The reality is that I think it’s frustrating being there and watching the game and sitting there. Part of it, like any player, you never want to get hit. That’s the reality of playing this position, ask any quarterback who wants to play this game. At the same time, it’s part of the job.”

Wilson’s agent Mark Rodgers then came out last week and said that while Wilson hasn’t demanded a trade, he would be willing to play for the Chicago Bears, Dallas Cowboys, Las Vegas Raiders and New Orleans Saints – although news of Dak Prescott’s longterm contract on Monday has narrowed that list.

“If you want to get out of there you do it behind the scenes, you don’t go publicly,” Jones told Fox News. “I think that hurts yourself, hurts the team because even if you can’t find a place to go to, you got to go back to that team and your teammates have bailed out on you because of the things you’ve said publicly.”

Coach said that he could see Wilson being traded to the Saints, adding that while Drew Brees likely has another season in him, “I think he’s done in New Orleans, personally.”

Jones recently served as head coach of the XFL’s Houston Roughnecks. After the league folded in 2020, Jones joined CoachTube.com, an online platform offering instructional courses in a wide range of sports, where he teamed up with legendary coach Mouse Davis to teach a course on the famous “run and shoot” offense.

“I’ve gotten calls from every level. CFL coaches, NFL coaches, college coaches, high school coaches, and so it really is a chance for somebody to better themselves in throwing the football and see how we did it.”

Jones said he has seen the coach-to-coach platform especially take off as a result of the pandemic changing the way the game is taught.

“There’s no more coaches clinics anywhere. It used to be where thousands of coaches would go to Dallas and now you can’t do that anymore so it’s really been interesting to see how it’s grown and the calls we get.”