These players saw their fantasy values increase or decrease most based on their performances in Week 7:

RB Antonio Gibson, Washington Football Team: Gibson finally got a chance to be the workhorse and he delivered, albeit against a struggling Dallas defense, with 20 carries for 128 yards and a touchdown. Curiously, he wasn't used as a receiver in this game — the first time that has happened this year. Perhaps it just means he has even more upside.

QB Joe Burrow, Cincinnati Bengals: In his first seven games in the NFL, Burrow has thrown for over 300 yards five times. Against Cleveland, he had a career-high 406 passing yards, while adding his third rushing touchdown of the season. He's looking better and better each week. 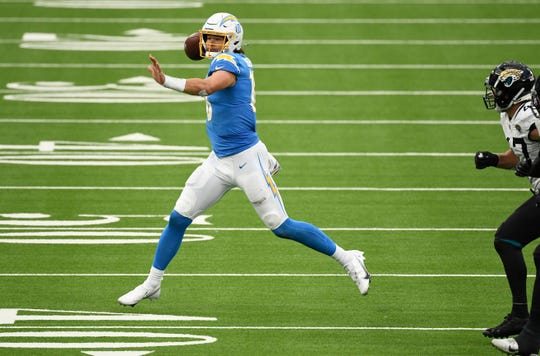 Chargers quarterback Justin Herbert throws on the run against the Jaguars in Week 7. He had 347 passing yards and three touchdowns in the game. He also ran nine times for 66 yards and a score. (Photo: Robert Hanashiro, USA TODAY Sports)

QB Justin Herbert, Los Angeles Chargers: The 2020 class of rookie quarterbacks is looking pretty strong (and that's even before Tua Tagovailoa makes his starting debut this week). Herbert has been nothing short of spectacular with seven TD passes and no interceptions over the last two weeks. He also added his second rushing touchdown of the season on Sunday.

RB Chase Edmonds, Arizona Cardinals: With Kenyan Drake nursing an ankle injury, Edmonds will benefit. Averaging a lofty 6.1 yards per carry, he is impossible to tackle in the open field and continues to pile up yards after contact.

WR Tyler Lockett, Seattle Seahawks: Lockett might have turned in the fantasy performance of the year on Sunday night: Targeted 20 times, he caught 15 of them for 200 yards and a trio of touchdowns. With starting running back Chris Carson injured, QB Russell Wilson might need to throw even more.

Make it 3️⃣ touchdowns on the day for @TDLockett12!

QB Cam Newton, New England Patriots: New England has struggled to put points on the board and a lack of receiving talent is a big reason why. Newton is pressing to make plays, which has resulted in seven interceptions and just two touchdown passes on the season.

RB Ezekiel Elliott, Dallas Cowboys: It is hard not to ignore the challenges facing Dallas on both offense and defense. Elliott managed just 45 yards on the ground against Washington and has yet to rush for over 100 yards in a game all season.

RB Jerick McKinnon, San Francisco 49ers: In a favorable spot with Raheem Mostert placed on injured reserve, McKinnon had just three carries for minus-1 yard, losing snaps to the more effective Jeff Wilson and JaMycal Hasty. San Francisco's running backs can be valuable, but it's becoming more difficult to know which one to play.

WR Mike Evans, Tampa Bay Buccaneers: The Tampa Bay offense already had too many mouths to feed, even before the arrival of Antonio Brown. With a nagging ankle issue and three receptions for 47 yards over the past two weeks, Evans is no longer an every-week start.

WR DJ Chark, Jacksonville Jaguars: Chark did have seven targets Sunday, but caught just one in yet another clunker by the Jags. QB Gardner Minshew has struggled with the deep ball this season, which is how Chark does the most damage.