North Carolina and Duke added another legendary chapter in their rivalry on Saturday night.

In an epic Final Four matchup that will go down as one of the classics in NCAA men’s basketball history, North Carolina defeated Duke 81-77 and will head to the national championship game against Kansas on Monday night at the Caesars Superdome in New Orleans. 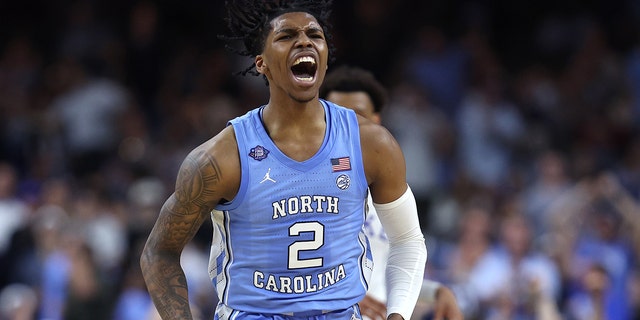 Caleb Love #2 of the North Carolina Tar Heels reacts in the second half of the game against the Duke Blue Devils during the 2022 NCAA Men’s Basketball Tournament Final Four semifinal at Caesars Superdome on April 02, 2022 in New Orleans, Louisiana.
(Jamie Squire/Getty Images)

With the Tar Heels up one basket, Love hit a big three-pointer to put the team up four 78-74. Duke’s Jeremy Roach drove down to respond with a lay-up. But it would Love’s free throws that would end up sealing the game for North Carolina and put the Tar Heels back in the national title game.

Love finished with a game-high 28 points on 11-of-20 shooting from the floor. He had four rebounds and one assist in the game.

Three other North Carolina players were in double-figures in scoring. Armando Bacot finished with a double-double putting up 11 points and 21 rebounds. He fouled out of the contest. 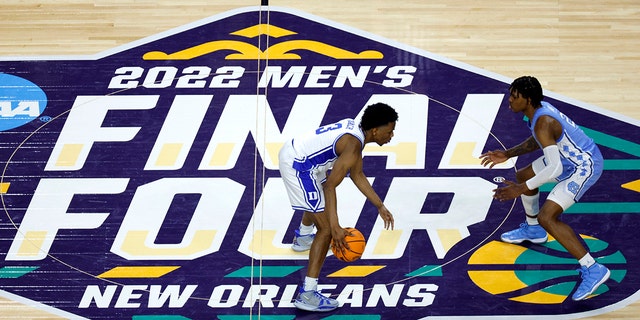 Jeremy Roach #3 of the Duke Blue Devils dribbles against Caleb Love #2 of the North Carolina Tar Heels in the first half of the game during the 2022 NCAA Men’s Basketball Tournament Final Four semifinal at Caesars Superdome on April 02, 2022 in New Orleans, Louisiana.
(Chris Graythen/Getty Images)

Duke put up a good fight. There were plenty of lead changes.

Paolo Banchero had 20 points and 10 rebounds in the game. Trevor Keels finished with 19 points off the bench and two rebounds. 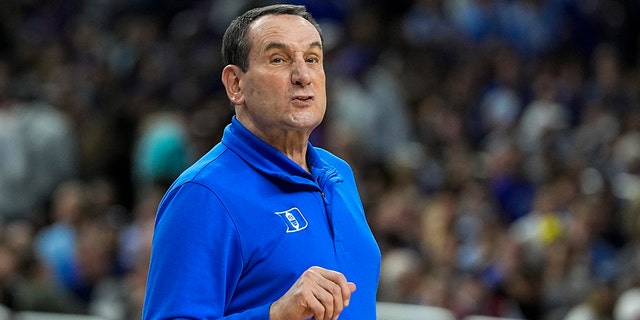 Duke head coach Mike Krzyzewski watches during the first half of a college basketball game against North Carolina in the semifinal round of the Men’s Final Four NCAA tournament, Saturday, April 2, 2022, in New Orleans.
(AP Photo/David J. Phillip)

Coach K announced before the start of the 2021-22 season that this would be his last and nearly led Duke to a sixth national championship.

He will finish his career as one of the most decorated NCAA men’s basketball coaches in history. He is the career wins leader with 1,202 victories. He’s won five championships and led Duke to 13 Final Fours. He was a five-time ACC Coach of the Year and a three-time Naismith Coach of the Year.

On Monday, the focus will be on North Carolina’s matchup against Kansas. North Carolina were champions in 2017 and were the runner-up in 2016. 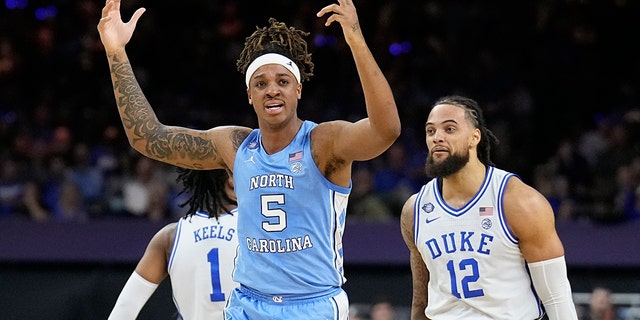 North Carolina’s Armando Bacot (5) reacts to a play during the first half of a college basketball game against Duke in the semifinal round of the Men’s Final Four NCAA tournament, Saturday, April 2, 2022, in New Orleans.
(AP Photo/Brynn Anderson)

Hubert Davis has guided the No. 8-seeded Tar Heels to the championship game in his first season. Davis has the possibility of following in Steve Fisher’s footsteps in winning a national title in their first-ever season on the end of the bench as a head coach.