Giants captain Jo Harten has decided not to take formal action against a social media user who told her to “rot in hell” and “die” after her side went down to a single goal against the West Coast Fever on Monday.

Harten says she returned to the sheds after the closely fought game and picked up her phone to see the message. 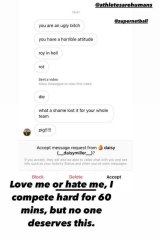 Jo Harten was sent the vile message via Instagram.

“Love me or hate me, I compete hard for 60 mins, but no one deserves this,” Harten wrote in an Instagram story.

As a result of the post, Harten was contacted by Netball Australia’s integrity unit but has chosen not to take further action beyond reporting the abuse to Instagram.

“I’m not in a position to call them out in a matter of law and I probably won’t involve the police,” Harten said.

“We had a really emotional week being stuck in quarantine for five days [in Perth] and then a really tight game and to go back to the change room and look at my phone and see a message like that; repeated abuse in separate messages, I thought this needs to be called out. This is not the first time this has happened to a netball player.”

This year, the NRL has encouraged players to report abuse to the NRL integrity unit to be passed on to the police.

Last month, two men were charged for sending racial abuse to Rabbitohs star Latrell Mitchell. In March, a number of bookmakers banned a man from using their platforms after they sent abusive messages and threats to Roosters star Josh Morris. 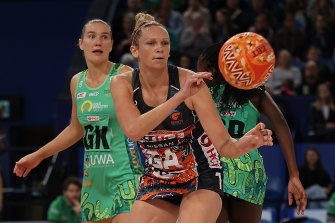 Giants captain Jo Harten has decided not to take formal action against a social media user who told her to “rot in hell” and “die”.Credit:Getty

“For me, I know I’m a really experienced player and I’ve got thick skin and I can take an awful amount of pressure on my own shoulders, but if that message had been sent to one of my younger teammates who are really inexperienced and not used to handling things like that; that could have been a really different scenario,” she said.

The Giants also made a statement in support of Harten and condemned the message.

Giants general manager Tim Underwood said the club was supportive of any formal action she wished to take.

“Behaviour like this is completely unacceptable and our athletes deserve better,” he said. “No matter what you think of the athlete or the result, behaviour like this has no place in our game or in sport more broadly.”

Sports news, results and expert commentary delivered straight to your inbox each weekday. Sign up here.