‘Hopefully I would get it after I competed’: Campbell sisters would risk coronavirus for Olympic gold

Two of Australia's highest-profile Olympians, freestyle stars Cate and Bronte Campbell, say they would swim in front of empty stands and risk a coronavirus infection if it meant competing at the Olympic Games in Tokyo.

With swift developments on Thursday seeing the outbreak declared a pandemic by the World Health Organisation and the entire NBA season being postponed due to a player infection, there was more conjecture about the viability of the Games, set to start on July 24. 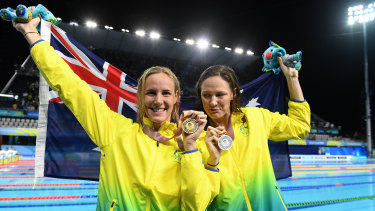 Bronte and Cate Campbell want more moments like this when they swim in Tokyo, regardless of the health risk.Credit:AAP

The International Olympic Committee has been unwavering in its message that the massive event will proceed as planned and every precaution was being put in place to ensure the safety of 11,000 athletes from 206 nations.

But as events continue to be either cancelled, postponed or played without spectators across the sporting world, the notion that the Olympics could be put on hold for a year or held with limited or no access for fans has become an increasing possibility.

It leaves the athletes in a precarious position but Bronte Campbell said none would be dialling down their training loads just in case a red pen was put through the 2020 Games in coming months.

"You can't avoid it," Bronte Campbell said. "You go to the shops and there is no toilet paper. But at the same time, being in the bubble is really important for us. There's nothing at the moment that changes anything. 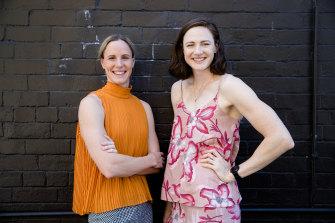 No stopping them: Olympic swimmers Bronte and Cate Campbell.Credit:Edwina Pickles

"I don't think there is any athlete that is slacking off because of the chance that coronavirus is going to have an impact on the Olympics in some way."

Bronte Campbell said she would only withdraw from the Games under the most extreme of circumstances and if that meant catching coronavirus in Japan, that was a risk worth taking. She said the virus seemed to be spreading in any case, so the rewards were worthy of the gamble.

"I don't think that if they say, 'there's a risk to you', that lots of athletes are going to pull out. It would take a lot for me to not want to go an Olympics. Hopefully I would get it after I competed. But if we are going to be talking about so many people in the world getting it anyway, going to the Olympics is worth it.

"I know it's different from Zika but we are willing to risk a lot. I already put my health and body on the line a lot with swimming. The way the virus is going, it doesn't seem like fit younger people are at a massive risk.

"The only way I won't be swimming at the Olympics is if they don't let me go or it is cancelled. That's it."

When asked if she would risk an infection by going to Tokyo, Cate Campbell said she would not hesitate unless the health warnings became dire for young, fit athletes, who currently sit in a low-risk category in terms of the severity of the illness.

"Yes [I would go]. There's a health risk to being an elite athlete. I think I put my body in more stress on a weekly basis anyway," she said. "You can catch it here in any case. There are so many things that can happen. The only way I wouldn't be competing at the Olympics is if it was cancelled and I don't believe it will get to that."

Both sisters, who own multiple Olympic gold medals from the world-beating 4x100m freestyle relay, said it was be deeply sad if the Games went on with nobody in the stands cheering the home but it would still represent the pinnacle for the athletes.

"If there was an empty stand, that's fine. I've swum in front of empty stands before. That's not new," Bronte Campbell said. "It would be really sad if there were no fans, that's a huge part to look up and see your family, or to see some Australian flags around the stadium. At the end of the day, it's about your feats in the pool and I'm very committed to that."

And Cate Campbell: "I think as long as the competition is still there, it's still an Olympic Games. The prestige is still there. It would be sad to compete in any empty stadium. Part of the things that make an Olympics special is that environment.

"But I think you will find that if you speak to any sport where an Olympic gold medal is the pinnacle, then you will find athletes that are willing to go."

Meanwhile, a Japanese Olympic official has apologised to organisers after he was quoted in the Wall Street Journal as saying there could be a one or two-year delay to the Games due to the coronavirus crisis.

Tokyo 2020 Executive Board member Haruyuki Takahashi's comments were swiftly dismissed by Yoshiri Mori, the Tokyo 2020 president, who said Takahashi was distant from the day-to-day Games preparation and nothing had changed.

"It is our basic stance that we press ahead with preparation for a safe and secure Olympics," Mori said. "Therefore, we are not at all thinking about changing courses or plans."