The Swifts have dedicated their Super Netball grand final win to the people of NSW in lockdown after taking down the Giants 63-59 at Nissan Arena on Saturday afternoon.

The Giants attempted to make the most of their skills with the Super Shot, but were unable to match the calm accuracy of their cross-town rivals. The win marks the Swifts’ seventh title and their second in three years.

Swifts captain Maddy Proud said she hoped the win would bring some light to those in lockdown.

“To everyone back home in Sydney we love you,” she said. “That was such an incredible game. The Giants were always going to bring it. But our girls — how bloody good.”

Swifts star Helen Housby said the win made the difficult season all worth it. The Swifts and the Giants were both forced to relocate states four times in a month to keep the competition alive.

“It felt more like a tour of Australia with games thrown in at times, it was difficult,” she said. “We are very thankful for everyone behind the scenes who kept the season going: all the sponsors and backroom staff. It’s not easy to do this.” 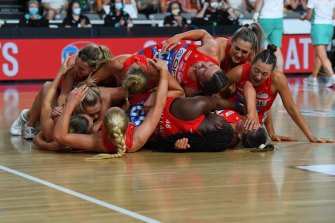 The exultant Swifts win the 2021 Super Netball grand final after 67 days away from home.Credit:Getty

The Giants made a very shaky start and the Swifts had sunk six unanswered goals by the third minute of the game. It was enough for Giants coach Julie Fitzgerald to call a time-out in a desperate effort to reset her side.

The Swifts have never lost the first quarter in a grand final — and they weren’t about to make the wrong sort of history in the hunt for a seventh premiership.

The time-out from Fitzgerald worked wonders for the Giants, who were able to get within one point before ending the quarter just two behind, 17-15.

During the second quarter, the Swifts, like the Giants, fell into the trap of relying too heavily on the Super Shot as both teams went back and forth with the two-point goal. However, the Swifts still went into the main break ahead 32-28.

The netball was interrupted by an uncomfortable half-time show, featuring a relatively unknown singer performing Miley Cyrus’ ‘The Climb’. After a half-time ad break, the broadcast resumed midway through the performance.

The song was then restarted — before being abruptly restarted once again after a few lines. Awkward, to say the least. Thankfully, the stellar netball soon resumed. 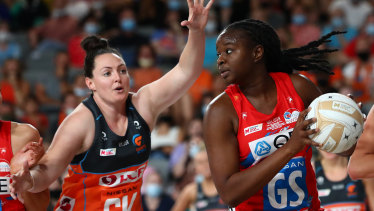 Sam Wallace of the Swifts controls the ball at Nissan Arena in Brisbane.Credit:Getty

In the third quarter, the Giants needed captain Jo Harten to bring her two-point goal-shooting game, but she was unable to get the job done and the Swifts led 49-40 with just 15 minutes to go.

The Giants gave it their very best in the final quarter and were able to get within four points, but the Swifts proved too calm. Once again, the Giants were let down by their reliance on the Super Shot, as the Swifts got a number of rebounds off unsuccessful attempts.