How will Warriors’ Stephen Curry respond to miserable performance in Game 3? HOUSTON – Stephen Curry has a simple formula for forgetting one of the worst nights of his career and ensuring it doesn’t repeat itself when the Golden State Warriors face the Houston Rockets in Game 4 of their Western Conference semifinal series on Monday.

“Got to sleep,” Curry said, following his dismal shooting performance Saturday evening. “And turn the page.”

Curry has not been Curry-esque in any way during this postseason — averaging 22.6 points per game — but his lowest point came at Toyota Center as the Rockets pulled to within 2-1 in the series.

His 7-of-23 mark from the field was bad enough, but Curry also missed a swath of simple layups and muffed an uncontested dunk deep in overtime that provided viral internet fodder and instant material for comedians of all talent levels.

WARFARE: Rockets' goal for the remainder of series 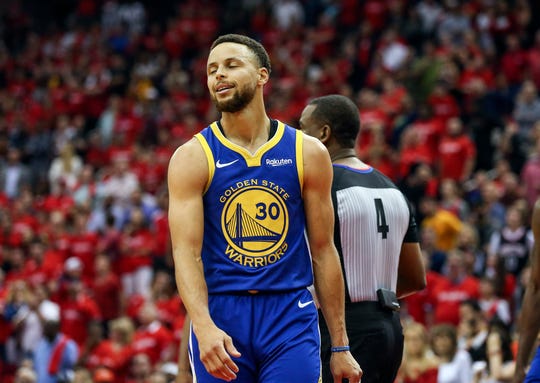 Golden State is keeping quiet about the dislocated finger Curry suffered in Game 2 and to what extent it is impacting his play. Head coach Steve Kerr insisted there is little doubt his star guard will respond strongly to adversity.

“He usually has a good game,” Kerr said, when asked how Curry reacts to his own subpar performances. “He is just really competitive and he gets locked in and a little bit angry. He comes out with a lot of focus and a lot of fight so that’s what we are expecting.”

Kevin Durant’s extraordinary form, averaging 41 points game over the past five postseason outings and 46 on Saturday, has been critical.

“I’m out there playing,” Curry added. “I got to produce. Game 4 is going to be another opportunity for everybody to produce and play well. The difference between winning and losing a playoff game is very thin. If a couple more shots (went) my way the (last) game could have been different.”

Curry has been a huge part of the Warriors’ modern dynasty since the current version of the team first won a title in 2015. The present slump he is in is unfamiliar to those who have also been part of the journey.

“We've known each other for so long now … we just chat,” Kerr said. “We just chat in passing. There's nothing planned, but my job as a coach is to help the players succeed, give them a little idea what they can do to maybe make an impact in one area or another. So those conversations happen all the time.”

A positive takeaway for the Warriors was that despite the fact that Curry was off and the team was outplayed by Houston for virtually the entire game, the Warriors still managed to take things to overtime.

Draymond Green insisted that Curry has been through difficult times shooting in the past and that the rest of the squad trusted him to be able to work through it.

“I think Steph has a good balance of beating himself up and just moving on with life,” Green told reporters. “That's important. It's part of the reason he's the shooter that he is. As a competitor, I know he's pissed with himself and I think that will bode well for us. Probably it's going to lead to some aggressiveness, and we like when he's aggressive so I think he'll be fine.”