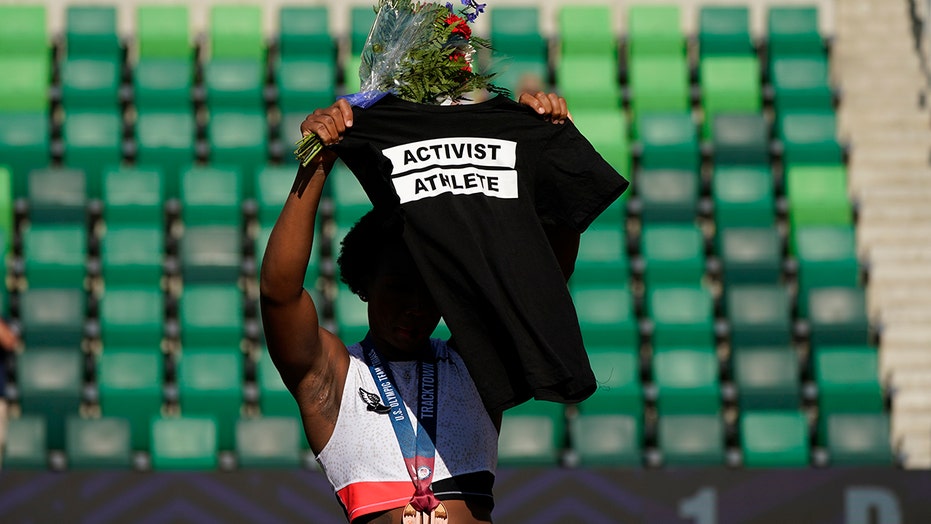 The International Olympic Committee (IOC) on Friday extended more guidelines on athletes’ freedom of expression at the Tokyo Games but warned against political gestures during official ceremonies, competition and in the Olympic Village. 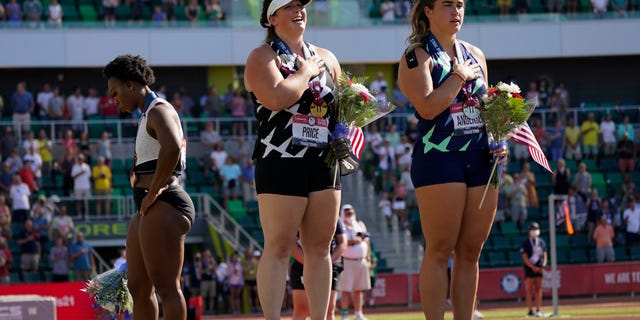 Gwendolyn Berry, left, looks away as DeAnna Price and Brooke Andersen stand for the national anthem after the finals of the women’s hammer throw at the U.S. Olympic Track and Field Trials Saturday, June 26, 2021, in Eugene, Ore. Price won, Andersen was second and Berry finished third. (AP Photo/Charlie Riedel)

“When expressing their views, athletes are expected to respect the applicable laws, the Olympic values and their fellow athletes. It should be recognized that any behavior and/or expression that constitutes or signals discrimination, hatred, hostility or the potential for violence on any basis whatsoever is contrary to the Fundamental Principles of Olympism,” the IOC said.

If an athlete breaks the guidelines, the IOC laid out possible discipline. The IOC could have disciplinary hearings, in which the athlete would be required to provide full transparency about their actions.

“The new guidelines are a result of our extensive consultation with the global athletes’ community,” IOC AC Chair Kirsty Coventry said. “While the guidelines offer new opportunities for athletes to express themselves prior to the competition, they preserve the competitions on the Field of Play, the ceremonies, the victory ceremonies and the Olympic Village. This was the wish of a big majority of athletes in our global consultation.”

The latest guidelines come amid an uproar over U.S. hammer thrower Gwen Berry’s demonstration during the national anthem. While those on social media have called for her removal from the Olympic team, the U.S. Olympic and Paralympic Committee (USOPC) decided in December not to punish anyone for Olympic protests.

In March, the USOPC laid out rules for acceptable demonstrations.

The “racial and social demonstrations” that are allowed include holding up a fist, kneeling during the national anthem and wearing hats or face masks with the phrases “Black Lives Matter,” “equality” or “justice” on them, according to the USOPC. Hate symbols, as defined by the Anti-Defamation League, are not allowed, nor are actions that would impede others competing in a particular event, including laying down on a playing surface. 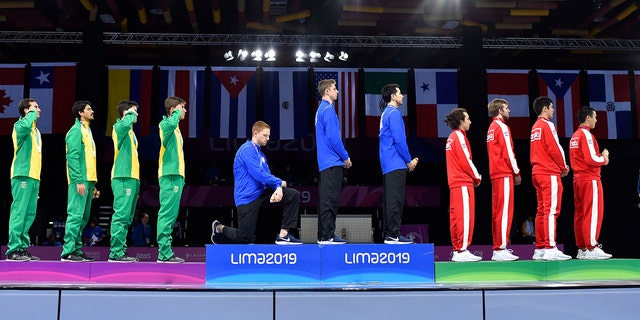 In this Friday, Aug. 9, 2019, photo, released by Lima 2019 News Services, Race Imboden of the United States takes a knee as teammates Mick Itkin and Gerek Meinhardt stand on the podium after winning the gold medal in team’s foil at the Pan American Games in Lima, Peru. "Racism, gun control, mistreatment of immigrants, and a president who spreads hate are at the top of a long list" of America’s problems, Imboden said in a tweet sent after his medals ceremony. "I chose to sacrifice my moment today at the top of the podium to call attention to issues that I believe need to be addressed." (Jose Sotomayor/Lima 2019 News Services via AP)

The USOPC said any demonstration that takes place should involve “advancing racial and social justice; or promoting the human dignity of individuals or groups that have historically been underrepresented, minoritized, or marginalized in their respective societal context.”

The organization warned athletes they could still be up for discipline from the IOC.

Berry and Race Imboden were both disciplined by the USOPC in 2019 over their demonstrations on the podium at the Pan American Games.