‘It’s horrible’: Over a quarter of battered Sydney to Hobart fleet wiped out

Over a quarter of the Sydney to Hobart fleet has been forced to retire from the race after battering weather conditions caused major damage to multiple boats on the first night.

Big seas and southerly winds of up to 30 knots created havoc for the fleet with a number of favourites forced to turn back to Sydney heads due to the conditions. 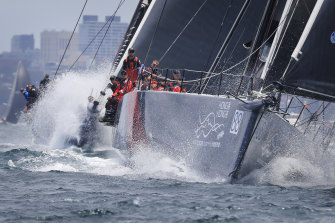 Conditions have been less than ideal for the 2021 fleet.Credit:Getty

Despite an earlier issue with their sail, Scallywag along with super maxi rivals, LawConnect and Black Jack, are still racing down to Hobart and are due to enter the Bass Strait shortly. Black Jack currently has the line honours lead.

“I’m hiding in the hatch putting on my wet weather jacket. You can’t see.”

One of the first to retire was handicap favourite Moneypenny, owned and skippered by Sean Langman, which was forced to return to Sydney due to a broken forestay.

“Let’s say it was pretty fruity. We were using new technology with foils. We had faith in the new system, I suppose you learn from this,” he said.