Of course, the Minnesota Timberwolves and Anthony Edwards discussed his athleticism, his dunks and his potential.

But as the Timberwolves mulled whether to select Edwards with the No. 1 overall  pick, Timberwolves President of Basketball Operations Gersson Rosas became impressed and inspired over something else. During his pre-draft interview, Edwards detailed how the deaths of his mother and grandmother have shaped him.

“He talked about how 'I’ve gone through the hardest things in life; I’ve had the hardest losses,’” Rosas recalled to USA TODAY Sports. “‘But there’s nothing that can’t take away my joy now. I lived through it all.’”

At only 14 years old, Edwards’ mother (Yvette) and grandmother (Shirley) died within an eight-month span. Edwards’ older brother, Antoine, then became his legal guardian. Despite losing parental figures, Edwards said he did not let those circumstances cloud his outlook on life. Instead, he has tried to honor his mother and grandmother by echoing their personalities and teachings.

“They’re just the person that I am today,” Edwards told USA TODAY Sports on Friday. “I try to be the happiest person every time I wake up.”

And Edwards is the happiest person when he wakes up because he then spends that day dribbling, passing and shooting a basketball.

The Timberwolves believe those qualities significantly explain why Edwards has remained the NBA’s top rookie scorer (14.6 points per game) while showing season-long development with his defense and ball handling. They also attribute those qualities into helping Edwards deal with unique challenges during his rookie season.

The Timberwolves (7-23 through Saturday) have the Western Conference’s worst record amid overlapping absences to their star players in Karl Anthony-Towns (a combined 20 games related to an injured left wrist and testing positive for COVID-19) and D’Angelo Russell (10 games and counting related to a left knee injury). Edwards has assumed varying roles as a reserve and starter as well as an off-ball and ball-handling wing player.

Because the NBA oversaw a resumed season in a campus bubble amid safety concerns with the coronavirus, Edwards and the rest of his rookie class missed out on Summer League. For the same reasons, Edwards can't bond with teammates and coaches over team dinners and outings like in a normal season.

“It’s going exactly like how I imagined – up and down,” Edwards said. “But most of all, I’m having fun.”

Rarely does a day go by where the Timberwolves don’t see Edwards smiling or laughing.

“We’re losing a lot, so everybody might come in sad. But that’s not going to make it work,” Edwards said. “So I come in happy, loud and energetic. I’m the youngest player, so I just try to have fun with it.” 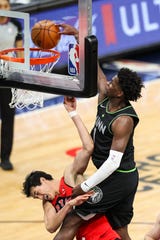 Edwards, whom coaches and teammates refer to as “Ant,” backs up his joyful personality with his work ethic.

He routinely watches game footage with coaches. He often completes shooting and training workouts before and after practice. And he has impressed his coaches and teammates with both his highlight reel dunks and his defensive tenacity.

Because of those qualities, Rosas said he believes that Edwards has “got the best chance at Rookie of the Year." Granted, other NBA talent evaluators might consider Charlotte Hornets guard LaMelo Ball because of his playmaking. They might favor Golden State Warriors center James Wiseman because of his defense. And they might penalize Edwards for playing on the league’s worst team.

“I think we’re going to play better as the season goes on once we get healthy. But at the end of the day, it’s his impact on the game,” Rosas said. “Other guys might be in other situations where there might be more of an opportunity to win. But it’s about how he impacts our team.”

In one game, Edwards attacked the rim over Wiseman before knocking him under the basket. In another game, Edwards shot a 3-pointer over Los Angeles Lakers star LeBron James. And most recently, on Friday night, Edwards threw down a vicious one-handed dunk over Toronto Raptors forward Yuta Watanabe in what arguably became the best dunk of the season.

After each of those plays, Edwards flashed a big smile. Yet, he downplayed the significance of going against a fellow rookie (Wiseman) or competing against an NBA star (James). He dismissed his recent dunk because it coincided with a loss where he shot 3-of-14 from the field and 0-of-7 from 3-point range. And although he said he “definitely” wants to win the NBA’s Rookie of the Year award, he stressed he cares more about team play.

“I have to keep playing hard, going hard and being the same person,” Edwards said. “I don’t really monitor what they’re doing. I hope they’re playing well. But I don’t monitor. I want every rookie in my class to play well because they were saying how our class wasn’t that good.”

No one has said that about Edwards.

Timberwolves teammate Ricky Rubio credited Edwards’ light-heartedness for assuaging his frustration over losses and missed shots. Towns has advocated for Edwards to have increased ball-handling duties. And although Timberwolves coach Ryan Saunders sees room for improvement in all areas of his game, Saunders conceded, “I didn’t know he’d be this far along.”

“The guys all love being around him. But you can coach him hard, too,” Saunders said. “I can’t say enough positive things about the way he’s been able to take to coaching.”

That is because Edwards has mostly handled the obstacles in stride.

Without the Summer League, Edwards compensated with frequent film study and workouts once training camp started. Edwards dismissed feeling lonely during the pandemic. He has spent most of his free time with his girlfriend and their two dogs at home, while also staying in touch with his brother in Atlanta.

Other people have helped Edwards, too.

Edwards said that former NBA star Dwyane Wade mentored him and expressed appreciation for the “love” Wade gave him as a TNT analyst for predicting he could become better than him. With James and Edwards both clients of Klutch Sports, Edwards said the Lakers star has consistently encouraged him with his development and about the need to maintain his work ethic. And Edwards said he has sought guidance from teammates.

“He’s a bright young man who has gone through some tragedy in his life. As a result, he has strong grit,” Rosas said. “He has a perspective that is rare for young guys. By no means is he perfect. By no means is he a finished product. But he gets it. He’s charismatic. He loves to play. He loves his teammates and the team environment. And he’s got an energy that lights up the room and gets people excited.”