Liverpool defender Ibrahima Konate knocked the ball into his own net in the 19th minute while Yoane Wissa doubled Brentford’s advantage before halftime after his side had two goals disallowed following VAR reviews in a frantic opening 45 minutes.

Darwin Nunez struck for Liverpool early in the second half but his goal was then ruled out for offside.

Alex Oxlade-Chamberlain did give Liverpool hope when he headed in a fizzing cross from Trent Alexander Arnold soon after but Bryan Mbeumo clinched all three points for Brentford in the 84th minute.

The victory added to a shock 4-0 win at home to Manchester United in August and a 2-1 triumph at champions Manchester City in November, taking Brentford up to seventh in the standings on 26 points after 18 games.

Liverpool are sixth on 28 points from 17 matches.

Brentford were missing their top scorer Ivan Toney through injury but made their more illustrious opponents suffer with their intense game plan and also capitalised on some slack defending from the visitors. 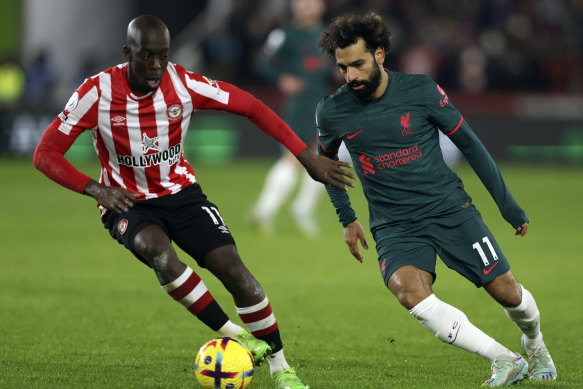 Liverpool could have taken the lead in the fifth minute when Nunez saw his shot cleared off the line by Ben Mee while Mbeumo was then denied down the other end by Liverpool goalkeeper Alisson.

Brentford took the lead with the help of some good fortune, Konate connecting with a corner with his knee and sending the ball trickling into his own net.

Wissa thought he had doubled Brentford’s advantage when he bundled the ball into the net but the effort was ruled out as the forward had left the pitch.

There was yet more frustration for Brentford when they had a second goal disallowed after Mee deflected a Wissa shot into the net.

But just 13 seconds later, Wissa made it third time lucky by heading the ball past Alisson and over the line.

Liverpool coach Klopp took drastic action at halftime, taking off Virgil van Dijk, Harvey Elliott and Konstantinos Tsimikas. The team improved in the second half and after Oxlade-Chamberlain had reduced the deficit they hemmed Brentford into their own half in search of an equaliser.

But Brentford hit them on the counter attack, Christian Norgaard launching a long diagonal ball towards Mbeumo, who outmuscled Konate before slotting into the net.