PATRICK BAMFORD enjoyed another fine away day – and sent Leicester spinning to their first Premier League defeat in eight games.

The Leeds striker struck his 11th goal of the season with 20 minutes left to put his team 2-1 up and Bamford sealed the match by squaring the ball for Jack Harrison. 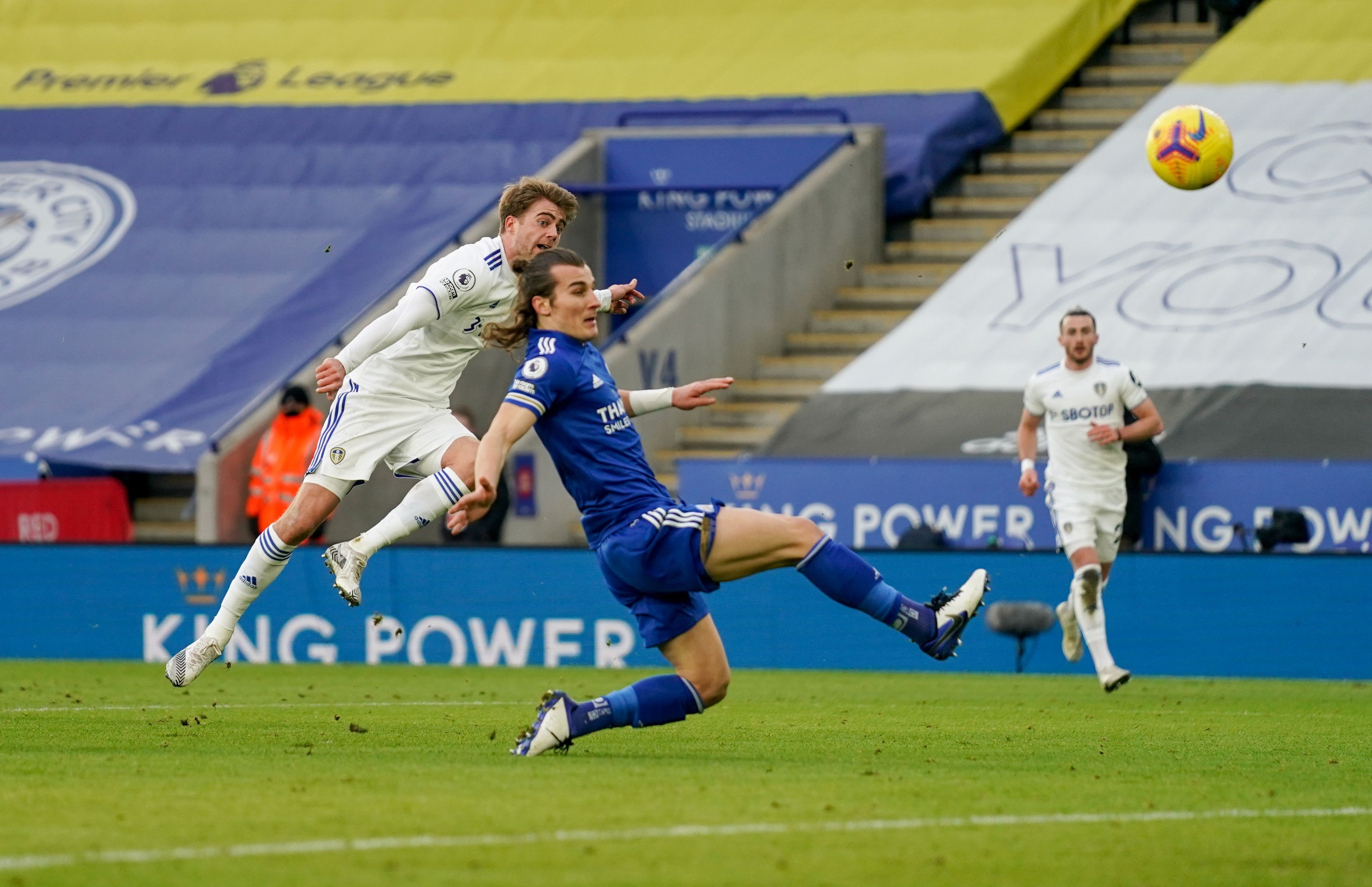 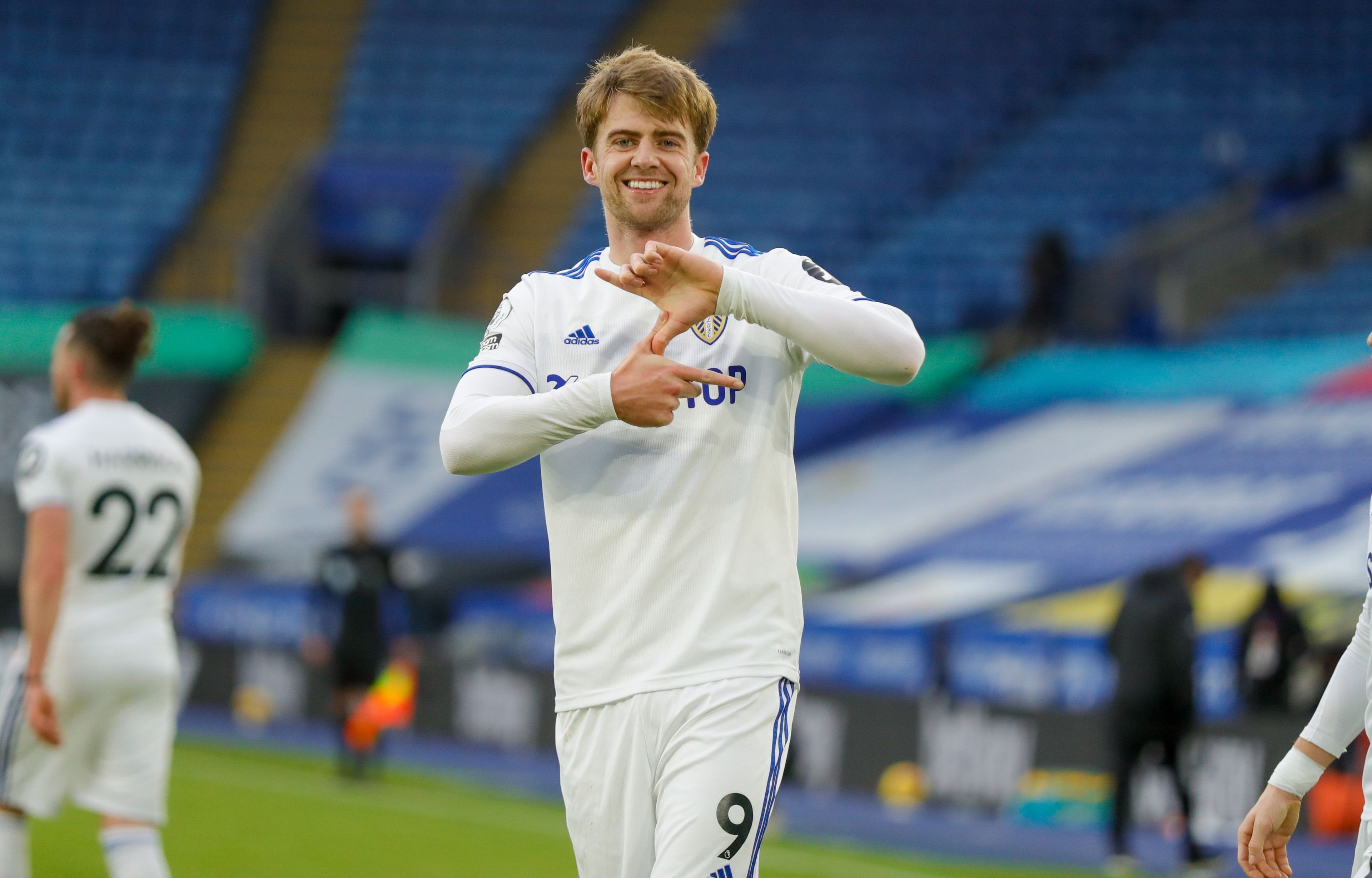 This capped a fine display by Leeds but also from Bamford, who also set up Leeds’ first and has scored eight of his goals away from Elland Road.

In the first half, Harvey Barnes put Leicester ahead before Stuart Dallas levelled 127 seconds later.

Leeds gave Leicester so many problems in the first half that for the second period, home boss Brendan Rodgers brought on central defender Caglar Soyuncu and switched to a back three.

It certainly worked until Bamford’s strike which was against the run of play. And the loss was a massive blow for Leicester who can now forget their dreams of winning the League.

A criticism of Barnes until this season was that he had failed to add goals to his game but he has certainly changed that.

And scoring a few has merely added to his confidence and the 13th minute strike was his 11th of the season.

It was a terrific move after Leeds skipper Liam Cooper handed Leicester possession with a long punt upfield. 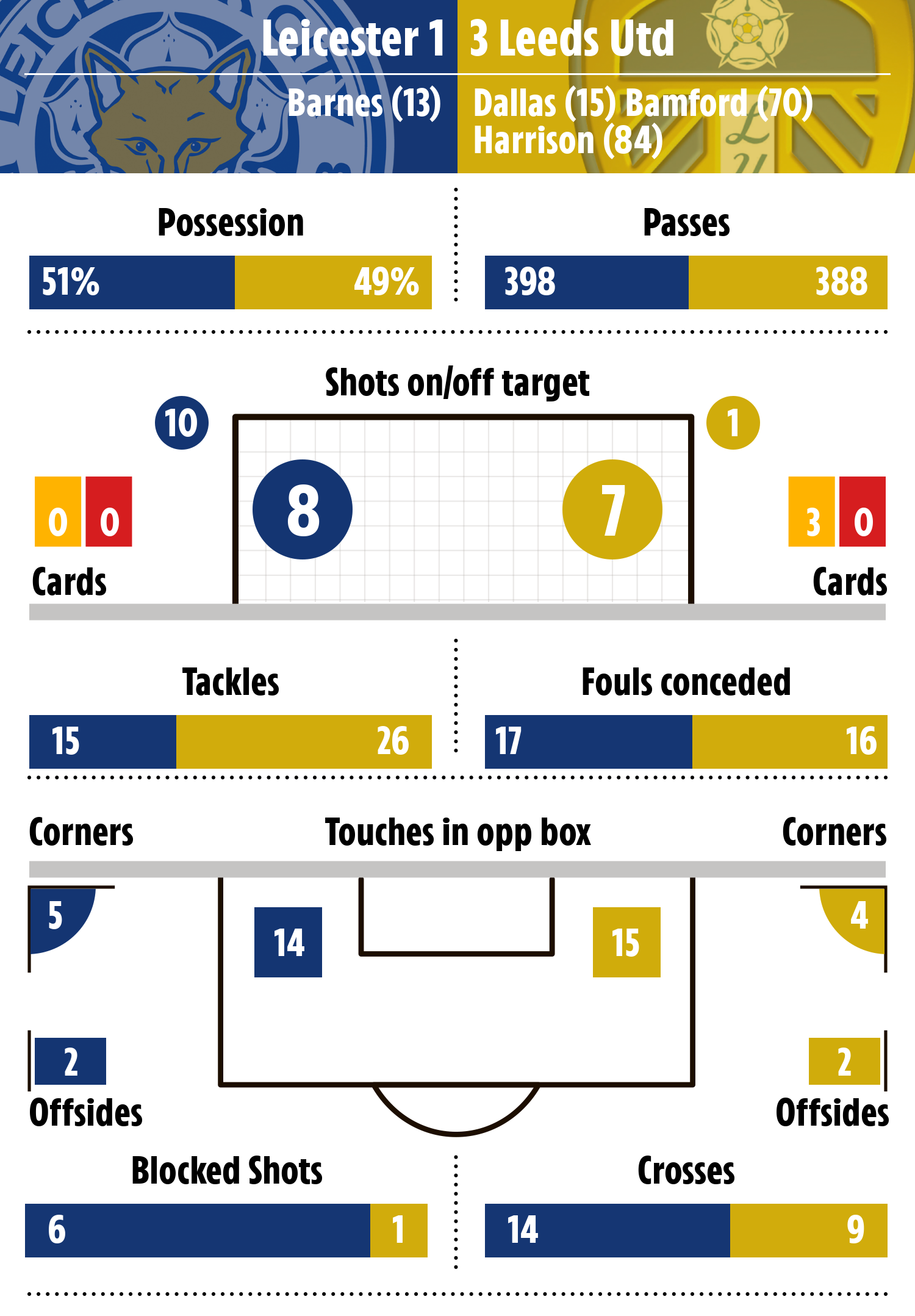 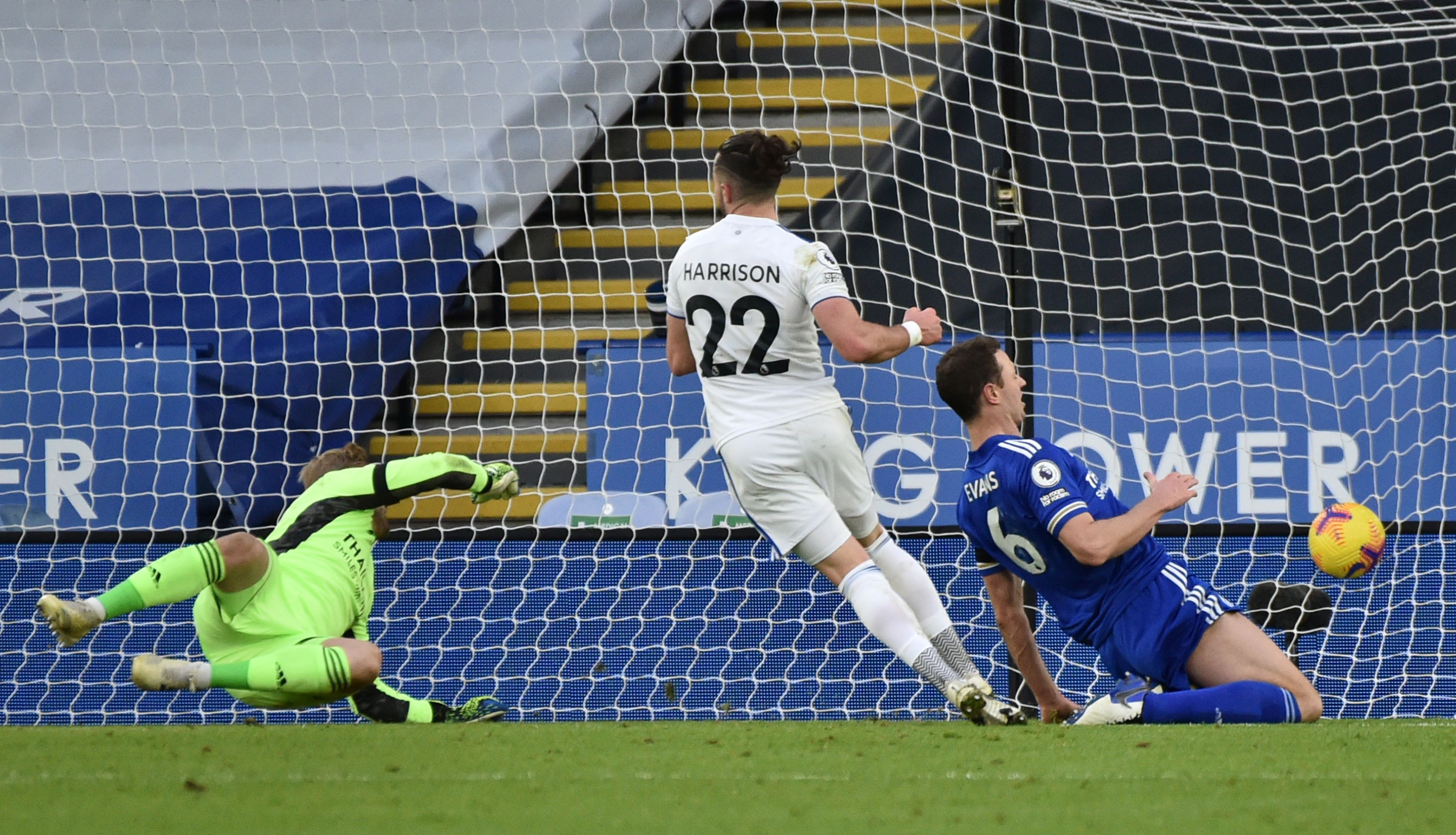 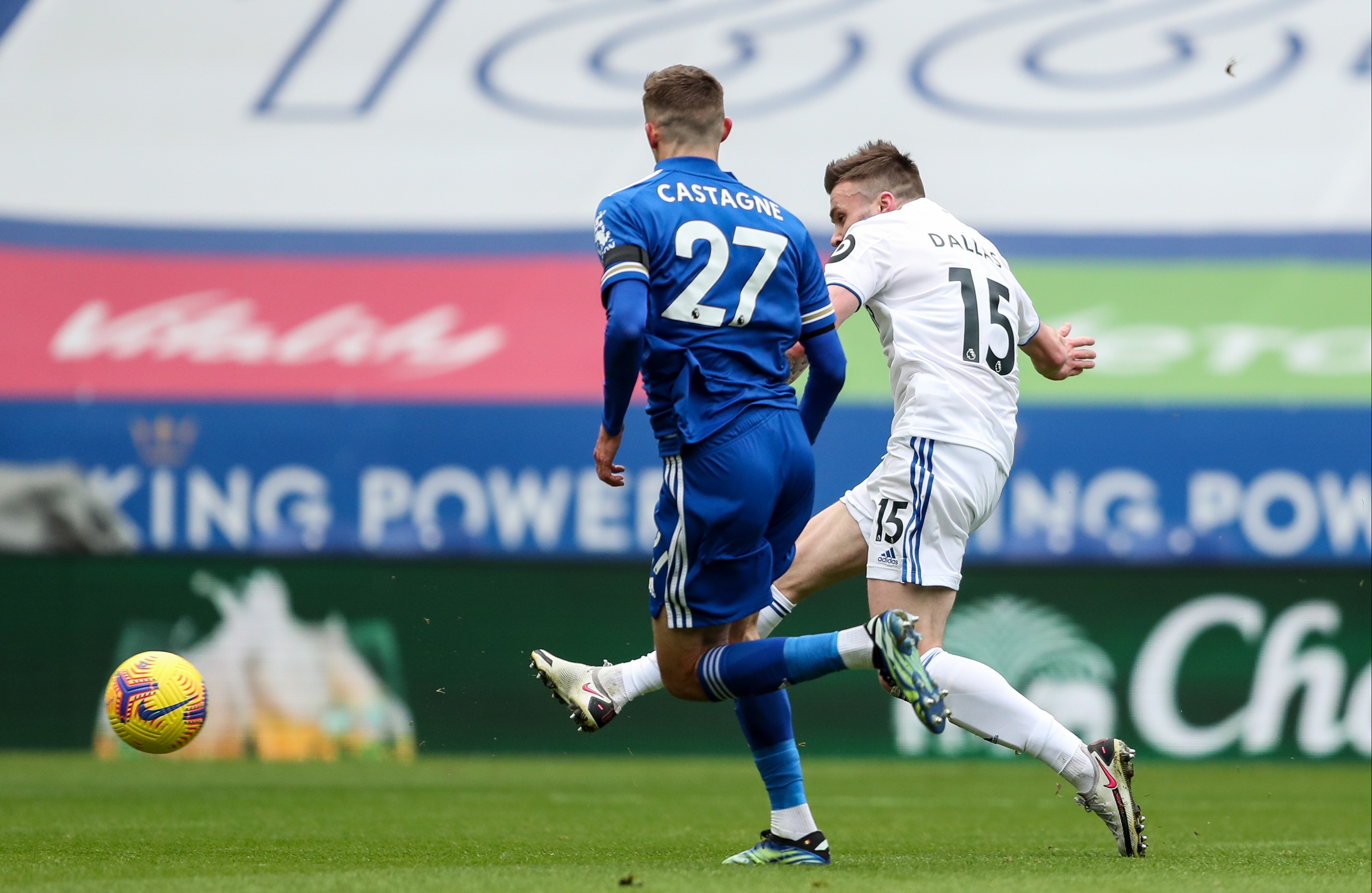 Barnes ran at the visiting defence, James Maddison returned a pass with an exquisite first-time touch and the winger delivered an expert finish. Luke Ayling could not get near him.

Yet as the visitors responded brilliantly, Ayling made amends with a brilliant run down the right after Maddison was guilty of sloppy play.

Bamford used the outside of his boot to find Dallas who swept the ball past Kasper Schmeichel.

Ayoze Perez thought he had restored Leiceser’s lead but was ruled offside and during the VAR check, Leeds subbed Rodrigo with an injury

His replacement, Mat Klich, was also left disappointed after thinking he had scored but was rightly ruled offside after reacting first when Schmeichel tipped Bamford’s header onto the bar.

As the frantic action continued, Schmeichel did extremely well to get down low to his left to keep out a drive from Raphina . Marc Albrighton was then denied by a couple of saves from Illan Meslier

Leicester then lost Timothy Castagne with an injury and at the break, Albrighton was replaced by Soyuncu in Rodgers’ defensive switch.

The home side certainly looked far more solid at the back yet with Leeds first decent second half attack – in the 70th minute – Bamford made it 2-1.

Evans failed to clear his lines, Raphina delivered the killer pass with Soyuncu caught flat footed and Bamford produced a fine, first time finish with the ball flying across Schmeichel and into the top corner. 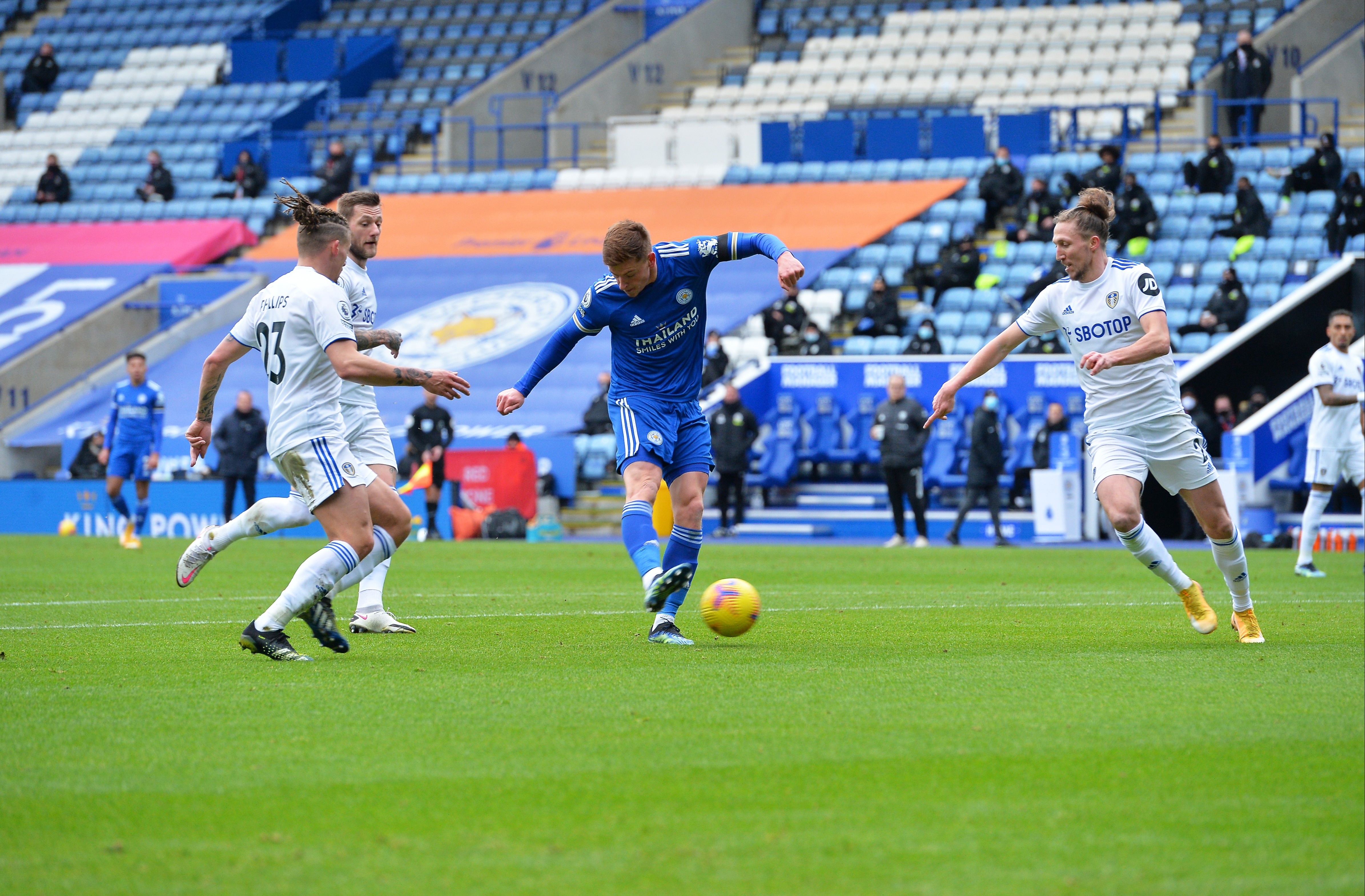 As Leicester pushed for a leveller, they were hit on the counter attack following a Maddison free-kick for 3-1.

Klich released Bamford who sprinted clear of Evans who then squared selflessly for Harrison.