The Sunshine Coast Lightning called on all their championship pedigree to defy the Giants 72-61 in their Super Netball clash at USC Stadium.

Playing for the first time in their newly-renovated home court, the Lightning's international contingent dazzled in the decisive moments on Saturday night. 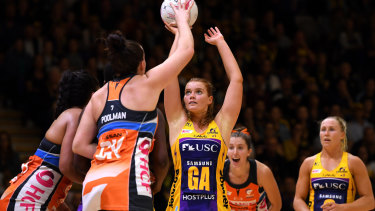 Lightning’s Stephanie Wood (centre) helped her side to a fourth consecutive win.Credit:AAP

Langman, Pretorius and wing defence Madeline McAuliffe were a fearsome trio during the opening minutes of the third term, during which their tight, well-organised defence squeezed all the energy out of their opponents.

"We'd been building pressure through the first half but we knew it would take us 60 minutes to grind it out," McAuliffe said.

"I love playing with Laura and we've been working really hard on our combination.

Giant Caitlin Bassett scored her 7000th career goal in the third quarter but was otherwise subdued with 31 goals.

Another Test player, Uganda's Peace Proscovia, scored 43 goals from 48 shots for the Lightning.

The win, and two second-half bonus points, moved the Lightning to the top of the table. For the Giants, it was a missed opportunity to sneak into the top four.

Diamonds midcourt contender Jamie-Lee Price was outstanding for the Giants in the first half but faded under pressure from Langman when the game was on the line in the second.

Despite the high calibre of athletes on show − a combined nine internationals from five different nations − the standard was below expectations for two legitimate finals contenders.

A high turnover rate meant neither side could assert dominance.

The Giants were the least wasteful of the two, with Jo Harten making the most of the trickle of ball wrestled off their opponents. Harten's 18 goals from 21 attempts was the shining light in a tight first half.

What little edge the Giants had was engulfed in the third quarter by the Lightning's disciplined midcourt.

Giants goal attack Kiera Austin was injected in the last quarter, and started well, but was unable to wrestle back control from the home side.