Louis Oosthuizen takes slender lead into final round at The Open

Deliverance, redemption or divine talent. Come Sunday, one tale will be satisfied after a packed field came a cropper at Royal St George’s and the wheat was separated from the chaff to leave three major champions vying for the Claret Jug.

Seeking catharsis from the six runner-up finishes at the majors since winning The Open in 2010, Louis Oosthuizen will take a one-shot lead into the final round after he battled valiantly to keep the prospect of a wire-to-wire victory in tact. But after blitzing the tournament’s scoring record at the halfway stage, the South African’s third round was altogether more grind than glory as he drew on all his nous and mettle to salvage pars and steady himself over the course of an errant back-nine. A one under par 69 by no means represented a catastrophe, but it unavoidably fell victim to the high standards he’d set, which may well be what’s required to haul himself over the line again.

“I made a few bad swings there in the middle of the round that put me in some awkward positions and ended up making two bogeys,” he said. “I did have a lot of opportunities to go two or three better, but that’s what this golf course can do to you. Finishing second isn’t great, so I will play my heart out tomorrow and see if I can lift the Claret Jug again.”

Four years after his victory at Royal Birkdale sparked one of sport’s most chastening slumps, Jordan Spieth is within tantalising reach of his own reclamation, too. The American, who won the Texas Open earlier this year after waiting 1351 days without a win, has a fifth major back in his sights, and it would surely be the most remarkable in a career that was once supposed to be so dominant. The 27-year-old had started the day three shots adrift but quickly surged into a share of the lead with an electric start, birdieing the second and fourth holes with sublime sloping putts. But that momentum soon faded into a stream of pars and then, with little warning, reality triumphed over romance as his putter betrayed him and a pair of bogeys undid his progress. He remains three shots back and immediately headed to the practice green in a heat of frustration.

The prized stallion of this three-horse race, Collin Morikawa’s precision uncharacteristically deserted him in a shaky start, but the 24-year-old, who became the fourth-youngest PGA Champion in history last year, recovered his immaculate potential, recalibrated the dial to his irons, and four birdies in the space of eight holes ensured that he trails Oosthuizen by just two. This is only the Californian’s second event on a links course, but with such extreme measures of talent, he has acclimatised with astonishing ease and coming from behind to clinch victory is a more familiar challenge. 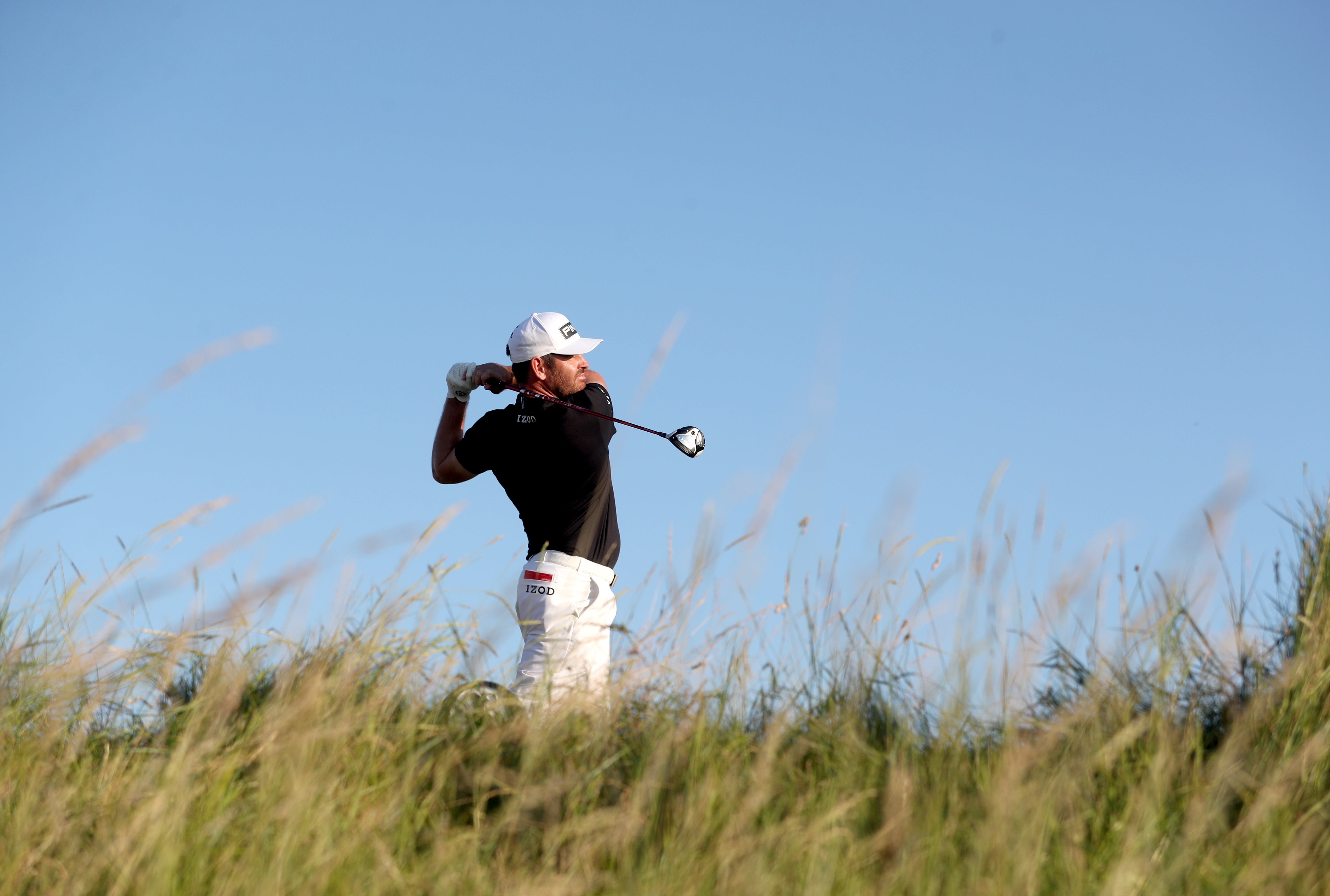 “I think the biggest thing I can draw from the PGA is just knowing I can get it done,” he said. “But I think confidence just comes from hitting good shots, quality shots, seeing putts go in. There is a lot to draw from, especially this week. I don’t have much experience on links golf, and pretty much all the highlights in my head are from this week. Thankfully there are quite a few.”

The rest of the field cannot be eliminated entirely, with Corey Conners and Scottie Scheffler four shots back. Jon Rahm, too, is only one further adrift after a round of 68 that often promised more, but a repeat of his emphatic late surge at the US Open must now be considered unlikely. More surprising, though, were the other notable names who’d loomed large over moving day that were instead left stuck in their tracks. World No 1 Dustin Johnson, who finished second at Royal St George’s a decade ago, sullied his chances with a series of wild hacks as he stumbled to a 73 that might have been far worse. His hopes now lay in ashes, and the same can be said for those of Brooks Koepka, too, who laboured to a 72 that leaves him long in the distance.

England’s wait for a winner on home soil will go on, too. Andy Sullivan and Paul Casey had lurked on the peripheries heading into the weekend, but both failed to break par and are now out of sight. Marcel Siem, who squeezed into the field with a victory on the lower-rung Challenge Tour only last week, saw an unfortunate twist in his unlikely fairy tale as his tee-shot on the vulnerable par-5 14th sailed out of bounds and amounted to a disastrous triple bogey. The German fought back brilliantly, birdieing two of the last three holes, and received a deservedly raucous ovation on the 18th green from a crowd who’ve grown fond of his underdog defiance.

But what is now almost guaranteed is that the man to lift the Claret Jug will wield few surprises. Three decorated careers in different acts will come to a head on Sunday afternoon, and one will rise to seize his destiny.