‘On track for Brissie’: Rugby league’s ambitious bid to become an Olympic sport

Rugby league has put its hand up to become an Olympic sport in the hope that the Nines format will be included in the official program for the 2032 Brisbane Games.

The announcement that Brisbane will become the third Australian city to host an Olympics will prompt several sports – including netball, cricket, lawn bowls, martial arts, rugby and surfing – to begin their pitches to be part of the event list.

Rugby league began that process well before Wednesday night’s announcement that Brisbane will be a host city. The International Rugby League is advanced in its negotiations to become a member of the Global Association of International Sports Federations (GAISF), the umbrella organisation for all Olympic and non-Olympic international sports federations. The plan is for the sport to be showcased at the 2026 Commonwealth Games, with a view to gaining IOC status in time to be a fully fledged inclusion for the Brisbane Games.

“We’re well in train to meeting qualifications to do exactly that. The rugby league Nines and the wheelchair rugby league are our two target spots.

“Given Queensland’s passion for rugby league, the fact the host city gets to put forward a number of sports, that works in our favour.

“I’ve already had a conversation with the [Sports] Minister in Queensland when I was there during Magic Round to put it on their radar and got a good reception.

“We’ll be working in earnest to achieve that outcome.

“[The goal is to become] a demonstration at worst, but hopefully if we can get it as an actual sport, that would be even better.” 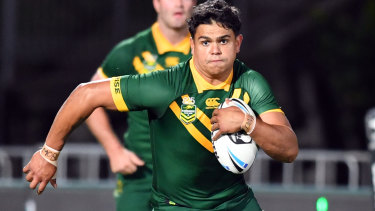 The Kangaroos could be in a position to go for gold in 2032.

Rugby league will face stiff competition in achieving its objective. About 25 sports are considered staples of the Olympic program, such as athletics, swimming and weightlifting. Others, such as sevens rugby or new Tokyo inclusions climbing and skateboarding, will have their status constantly reviewed.

Cricket officials are pushing for the T20 format to be included in the Olympic program, Netball has claims despite minimal male participation, while surfing’s future isn’t guaranteed beyond the 2024 Games. Rugby’s Olympic future is clouded beyond 2028 and there will be obvious questions raised about whether league Nines is too similar a sport to rugby sevens.

“I think they can [coexist], but I’m confident that our product is better,” Grant said.

“I’d like to see us both there because that would only help us with product differentiation.

“We’ll be working in earnest to achieve that outcome.”

“We’ve got 40-odd currently ranked, but we’re building. I took a call from Macedonia today to start their membership component. We are a growing sport.”

If unsuccessful in becoming a fully-fledged medal event, there is the prospect of becoming a demonstration sport, although the Games haven’t included those since 1992.

IRL is poised to release an international calendar that will include participation in the Pacific Games, a World Cup in France in 2025 followed by one likely to be held in North America or the Pacific in 2029. However, the 2021 edition in the United Kingdom remains clouded given Australia has yet to sign a participation agreement due to health concerns.

Asked if the 2021 World Cup would go ahead without the Kangaroos, Grant said: “That’s a question for the World Cup committee, the UK government and us in partnership. We’ll cross that bridge if we need to.”

“Netball internationally has been thinking about this for some time,” Go said.

“It’s one of the few sports where Australia has been the world No.1 for most of its existence and in 2027 we will celebrate the centenary of netball.

“It’s also a sport where African countries have a better-than-average chance of claiming a medal, because South Africa is strong and it’s also played in the Pacific.

“If the Olympic committee wants to look at a diversification of countries that can win medals, which I believe it does, then netball has to be right up there.

“We have a Fast5 version of our game and for rugby to enter the Olympics they did it through rugby sevens, but we also have a traditional format.

“If they want gender diversity, engagement by women and girls in terms of participation and viewership, this is a sport that has to be on that stage.

“We will be gunning hard.”