Opinion: NFL really means Not For Long, so rookies, here’s advice on reality of league Welcome to the NFL, rookies. Or something like that.

As rookie minicamps across the league commenced this weekend, I’m compelled to weigh in as an observer who has witnessed the NFL arrivals and departures of hundreds over the years.

First off, as you sit in your team meeting, take a look at the rookie on your left … and then have a glance at the rookie to your right. Statistically speaking, two of you (no, Kyler Murray, this doesn’t apply to you) won’t be there next year.

That’s as good of a fact-of-NFL-life barometer as any.

Have you seen the turnover rate? No, I’m not talking about fumbles and pick-sixes. It’s the bottom third of the roster. In the salary cap era, teams typically recycle backup players and special-teamers like used paper bags. There’s a reason the length of an average NFL career is around three years – and it’s not Drew Brees, the resilient Saints quarterback, 40, heading into NFL Year 19.

So, heed the words of Jerry Glanville, who famously declared that the NFL stands for, “Not For Long.”

Oh, so you have no idea who in the heck Glanville is? Well, coaches recycle, too. He once coached the Falcons, installed a run-and-shoot offense (that was ahead of its time when you consider the spread schemes of today) and left tickets at will call for Elvis.

And he had a way with words.

GIANT QUESTIONS: Daniel Jones ready to stand up to criticism in debut at Giants rookie camp

You may have been the big man on campus in college, voted most likely to succeed in high school and hailed as a prodigy in Pop Warner football, but now you’re surrounded by peers who similarly carry impressive credentials.

Sure, talent is a great separator. It’s why some players get second and third chances despite shady stuff that happened off the field. Yet when the talent fades, you’ll quickly find that in some ways you were nothing more than a number. You can only be so sentimental.

Ask Clay Matthews. For years, he was the signature pass-rusher for the Packers, wearing No. 52 as he came off the edge. Green Bay dumped the former first-round pick this year after 10 seasons and 83 1/2 sacks, leaving him to latch on with the Rams. This weekend, the Packers unveiled a new No. 52: Rashan Gary, the latest first-round pick.

No wonder Matthews mused on Twitter, “The body’s not even cold yet lol.”

The body. That would be yours, sacrificed to pursue the dream career that risks, in worst-case scenarios, someday suffering from the effects of CTE. During the combine, I asked a few prospects if they worried about long-term issues that might stem from head trauma. They weren’t sweating it. Like many before them, they insisted they knew what they were signing up for.

I’ve often run into retired players, hobbling because of old injuries, insist they’d do it all over again. I believe them. That’s true passion.

Even so, if you run into DeMaurice Smith, the players union chief, he might urge you to treat yourself as a business. That’s sound advice, one that Smith has often repeated to the constituents. You’re a professional – embarking on a career with the uncertainty of not knowing when it will end.

And timing has it that you’ve come to the league just in time to catch additional uncertainty related to a possible labor battle between the NFL Players Association and NFL owners. Last time, in 2011, the players were locked out for an entire offseason before a new collective bargaining agreement was struck. Next time, the work stoppage could be even uglier. So, brace (and save) for that. 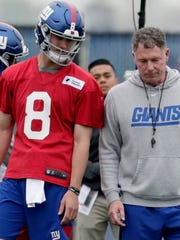 The Giants are taking heat over their decision to draft QB Daniel Jones at No. 6 overall. (Photo: The Associated Press)

Meanwhile, take care of that body. James Harrison, who had enough gas to run 100 yards with an interception return TD in Super Bowl XLIII, used to spend $300,000 per year on various specialists to train and maintain his body. Yes, it was a tax write-off. And Harrison, who entered the league as a undrafted free agent and was cut multiple times before getting on the track to become the Steelers’ all-time sack artist, played 15 NFL seasons.

Back in the day, I used to marvel at Jerry Rice, the NFL’s all-time leading receiver, who played 20 seasons. Rice was an undeniable fitness buff whose regimen included running up hills. And in 49ers practices, he and Roger Craig had the habit of running out every single play to the end zone – even simple slant routes — to condition themselves physically and mentally.

Yet something Rice once told me also left an impression. He maintained that he didn’t have a dime left from his first NFL contract (probably a four-year rookie deal), because he trusted the wrong person to handle finances. Good for Rice, he had a long career and was able to make up for early losses.

There are too many cases, though, where poor financial management and bad advice have left players who have seemingly struck it rich holding the bag.

Keyshawn Johnson, picked No. 1 overall in 1996 and now the co-founder of a sports agency, once warned that the type of ego that can fuel success on the field can ruin a financial portfolio. Too many, Johnson explained, took on undue risks while seeking investment home runs rather than safer, more conservative gains.

Bottom line: Be careful with your money and whom you trust as advisor. It sounds simple enough, right? Just know that so many players caught up in money messes never thought it would happen to them.

Now that preparations are in full swing to learn the playbook, remember this: It doesn’t matter now where – or if – you were drafted. Yes, it will affect the size of your rookie contract. And the higher picks will get more favorable practice reps.

For the long haul (and the second contract), draft status won’t define you.

Tom Brady, the guy with the TB12 Method, is the best example. He was a sixth-round pick. Just like Antonio Brown, now the NFL’s best receiver. The aforementioned Rice was the third receiver drafted in 1985, 16th overall.

No, Dwayne Haskins, the Ohio State quarterback snagged 15th overall by Washington, should only feel somewhat slighted that the Giants picked Duke quarterback Daniel Jones with the sixth pick. I mean, Dan Marino was drafted 27th overall, Aaron Rodgers was 24th … and Joe Montana was a third-round pick.

Then again, Josh Rosen was a top-10 pick last year. Now he’s in Miami, already working under his fourth different O-coordinator (Chad O’Shea) in a year. Talk about adapting to change. At least the trade from Arizona leaves Rosen to work with a respected quarterbacks guru, Jim Caldwell.

He knows better now: Nothing is a given in the NFL.

Which is exactly why new Cleveland coach Freddie Kitchens insists there will be no more Super Bowl predictions coming from the team’s top pick, cornerback Greedy Williams. Sure, Williams was just excited, like so many Browns fans inspired by the offseason moves.

But quick, send the memo to Jersey, where Jones is talking about the goal of winning multiple Super Bowls, like the man he is pegged to ultimately replace, Eli Manning.

It’s not about what you say, rookies. It’s all about action. And not for long.