Sunday night marked a stark contrast of styles between a pair of aging NFL quarterbacks.

Score this one for the long ball.

The Green Bay Packers rode the big arm of Aaron Rodgers to multiple touchdowns in a 37-30 win over the New Orleans Saints. While Rodgers was slinging it, Drew Brees dinked and dunked in a losing effort.

Rodgers completed 21 of 32 passes for 283 yards and three touchdowns. Green Bay’s first touchdown arrived after he connected with Allen Lazard on a 48-yard bomb in the second quarter.

Rodgers found Lazard again on a 72-yard pass early in the third quarter to set up the go-ahead touchdown as Green Bay took a 20-17 lead.

It was effective at times — especially when utilizing All-Pro running back Alvin Kamara. But it wasn’t enough to overcome the firepower of a rejuvenated Rodgers who continues to look a lot like his younger self in his 16th NFL season.

Rodgers, 36, also took advantage of the absence of a Superdome crowd, drawing a key free play on a late third-and-3 to ice the game. With Green Bay leading 30-27 late in the fourth quarter at the Saints 15-yard line, Rodgers drew Saints linebacker Demario Davis offside and thew a risk-free pass in the end zone to Lazard.

Lazard drew a pass interference penalty from Janoris Jenkins, setting the Packers up with first-and-goal at the 1-yard line. Four plays later, Rodgers found tight end Robert Tonyan in the end zone to take a 37-27 lead with 2:00 remaining. 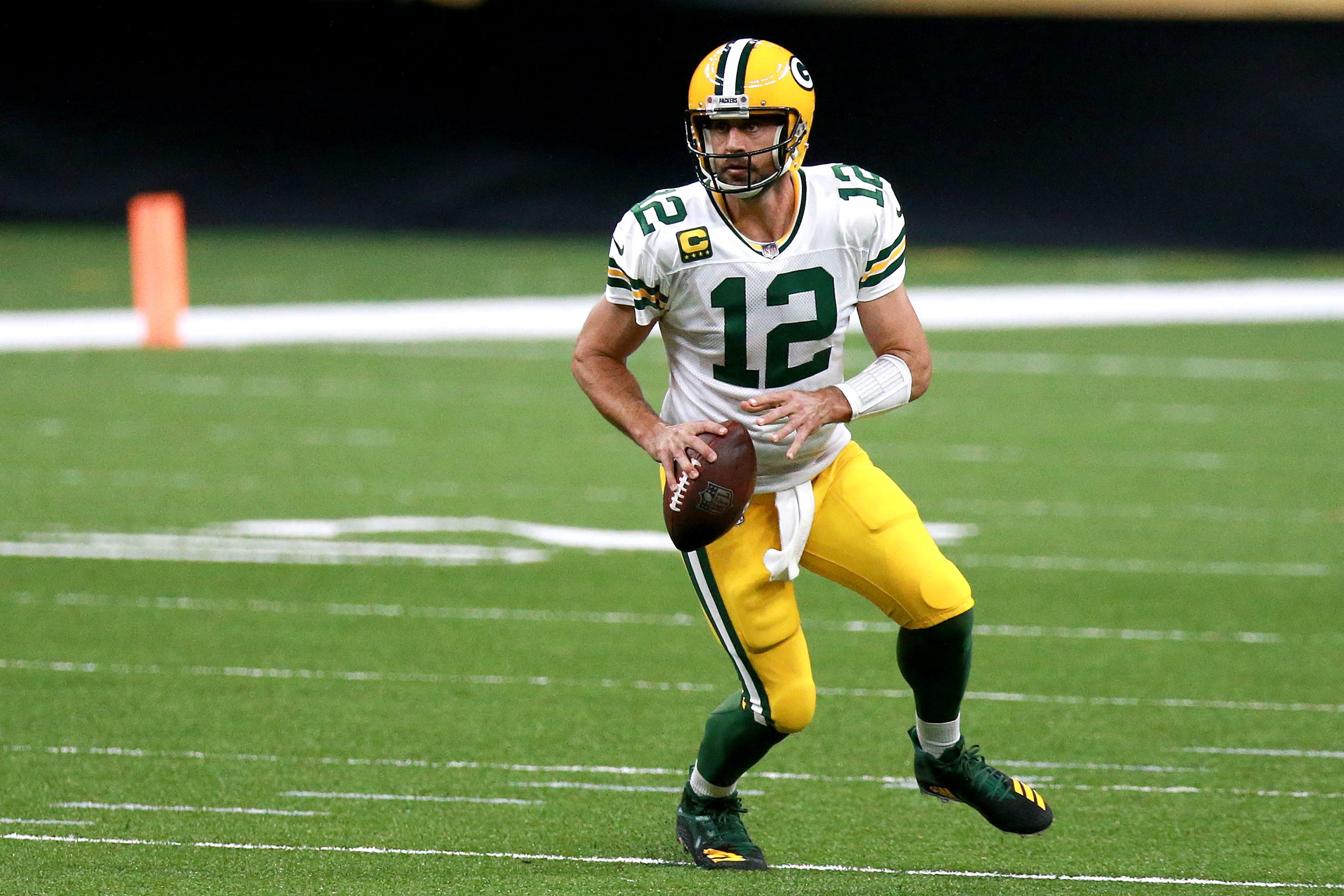 The Saints mustered a field goal on their ensuing possession, but a failed onside kick sealed the victory for the now 3-0 Packers.

The game hammered home for the Saints what has become increasingly obvious about their future Hall of Fame quarterback since last season. Brees, 41 and one of the game’s all-time great deep-ball passers, isn’t what he used to be.

The precision and arm strength that used to define Brees’ game isn’t there anymore. Brees entered Sunday’s game with the lowest average depth of target of any quarterback in the league at 5.2 yards per attempt. He was Pro Football Focus’ lowest-graded quarterback on pass attempts of at least 10 yards.

Sunday saw more of the same.

Brees’ stat line looked good, as he completed 29 of 36 passes for 288 yards with three touchdowns and no interceptions. The offense was effective at time — enough to tally 30 points.

But New Orleans’ offense was almost entirely reliant on the playmaking ability of Kamara once he got the ball in his hands. Take this third-quarter touchdown to tie the game at 27-27, for example.

Brees found Kamara on a short pass in the flat. Kamara and his blockers did all the work from there, rumbling through the Packers secondary for a 52-yard score. That shows up as 52 yards in the box score for Brees as much as Rodgers’ big passes counted in his stat line.

Brees looked regularly to short passes to advance the New Orleans offense and wasn’t effective when he did throw downfield.

Kamara finished the night as the Saints’ leading receiver, tallying 13 catches for 139 yards and two touchdowns. That was on top of his 58 rushing yards on six carries.

The Saints offense lived and died with Kamara. Sometimes that will work. Going up against the dynamic offense of the Packers on Sunday, it wasn’t enough.

For now, the Saints are missing an injured Michael Thomas, who’s also capable of turning short Brees passes into big plays. When Thomas returns from a high-ankle sprain suffered in Week 1, the Saints offense will add another dynamic.

But nothing will bring back Brees’ ability to throw downfield and the pressure that ability puts on opposing defenses.

KNOXVILLE, TN – NOVEMBER 28: Alvin Kamara #6 of the Tennessee Volunteers gains yardage against the Vanderbilt Commodoresin a game at Neyland Stadium on November 28, 2015 in Knoxville, Tennessee.(Photo by Patrick Murphy-Racey/Getty Images)

ATHENS, GA – OCTOBER 1: Alvin Kamara #6 of the Tennessee Volunteers celebrates after the game against the Georgia Bulldogs at Sanford Stadium on October 1, 2016 in Athens, Georgia. (Photo by Scott Cunningham/Getty Images)

INDIANAPOLIS, IN – MARCH 02: Tennessee running back Alvin Kamara at the podium during the NFL Scouting Combine on March 2, 2017 at Lucas Oil Stadium in Indianapolis, IN.(Photo by Zach Bolinger/Icon Sportswire via Getty Images)

INDIANAPOLIS, IN – MARCH 03: Running back Alvin Kamara of Tennessee in action during day three of the NFL Combine at Lucas Oil Stadium on March 3, 2017 in Indianapolis, Indiana. (Photo by Joe Robbins/Getty Images)

KNOXVILLE, TN – OCTOBER 15:Alvin Kamara #6 of the Tennessee Volunteers reacts after rushing for a touchdown against the Alabama Crimson Tide at Neyland Stadium on October 15, 2016 in Knoxville, Tennessee.(Photo by Kevin C. Cox/Getty Images)

MINNEAPOLIS, MN – SEPTEMBER 11: New Orleans Saints running back Alvin Kamara (41) runs the ball out of the end zone during a NFL game between the Minnesota Vikings and New Orleans Saints on September 11, 2017 at U.S. Bank Stadium in Minneapolis, MN. The Vikings defeated the Saints 29-19.(Photo by Nick Wosika/Icon Sportswire via Getty Images)

NEW ORLEANS, LA – OCTOBER 29: Alvin Kamara #41 of the New Orleans Saints rushes the ball against the Chicago Bears during the first quarter at the Mercedes-Benz Superdome on October 29, 2017 in New Orleans, Louisiana.(Photo by Chris Graythen/Getty Images)

NEW ORLEANS, LA – NOVEMBER 19:Alvin Kamara #41 of the New Orleans Saints holds up AirHead candies after his team defeated the Washington Redskins during a NFL game at the Mercedes-Benz Superdome on November 19, 2017 in New Orleans, Louisiana.(Photo by Sean Gardner/Getty Images)

NEW ORLEANS, LA – DECEMBER 04:Alvin Kamara of the New Orleans Saints reacts during the first half of a game between the New Orleans Pelicans and the Golden State Warriors at the Smoothie King Center on December 4, 2017 in New Orleans, Louisiana. NOTE TO USER: User expressly acknowledges and agrees that, by downloading and or using this Photograph, user is consenting to the terms and conditions of the Getty Images License Agreement.(Photo by Jonathan Bachman/Getty Images)

NEW ORLEANS, LA – DECEMBER 17:Alvin Kamara #41 of the New Orleans Saintswalks off the field after playing the New York Jets at Mercedes-Benz Superdome on December 17, 2017 in New Orleans, Louisiana.(Photo by Chris Graythen/Getty Images)

NEW ORLEANS, LA – DECEMBER 24:Alvin Kamara #41 of the New Orleans Saints in action against the Atlanta Falcons at Mercedes-Benz Superdome on December 24, 2017 in New Orleans, Louisiana.(Photo by Chris Graythen/Getty Images)

NEW ORLEANS, LA – DECEMBER 24:Alvin Kamara #41 of the New Orleans Saints, Marshon Lattimore #23 and Michael Thomas #13 celebrate after a game against the Atlanta Falcons at the Mercedes-Benz Superdome on December 24, 2017 in New Orleans, Louisiana.(Photo by Sean Gardner/Getty Images)

TAMPA, FL – DECEMBER 31: New Orleans Saints running back Alvin Kamara (41) runs left during the second half of an NFL game between the New Orleans Saints and the Tampa Bay Buccaneers on December 31, 2017, at Raymond James Stadium in Tampa, FL. The Bucs defeated the Saints 31-24. (Photo by Roy K. Miller/Icon Sportswire via Getty Images)

NEW ORLEANS, LA – JANUARY 07:Alvin Kamara #41 of the New Orleans Saints stands on the sideling during the second half of the NFC Wild Card playoff game Carolina Panthers at the Mercedes-Benz Superdome on January 7, 2018 in New Orleans, Louisiana.(Photo by Sean Gardner/Getty Images)

Packers have a lot of ways to beat you

The Packers, meanwhile, have a quarterback who can still produce at a high level with whomever he’s playing with. Green Bay played without injured Pro Bowler Davante Adams on Sunday, so Rodgers connected with Lazard for 146 yards and a touchdown.

Tight ends Tonyan, Marcedes Lewis and Jace Sternberger combined for 104 receiving yards and two scores. Running back Aaron Jones tallied 69 yards and a touchdown on the ground in addition to two catches for 17 yards. And that was on a slow night for him.

The Packers have multiple ways to find the end zone, and that’s largely due to the talent and playmaking Rodgers provides.

It’s a dynamic the Saints don’t have as time takes its toll on Brees.