Four shots at medals to come in the pool tonight

This morning’s swimming session has finished up. Here are your finalists for this evening: 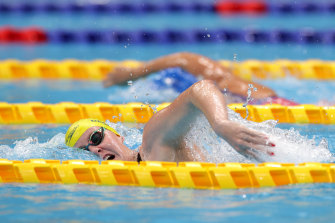 Katja Dedekind has another shot at a medal tonight.Credit:Getty

Bronze for Lambird in women’s 100m

Aussie Robyn Lambird has picked up third in the 100m T34 final at the track here. The race is for athletes who compete with a wheelchair.

Great Britain’s Hannah Cockroft has broken her own world record, hitting the line in a time of 16.39 seconds.

Lambird, who was born with cerebral palsy, finishes in 18.68 seconds.

Australia now has two silver and two bronze medals in athletics. I’ll make a small bet that Australia will win their first gold here today, courtesy of Isis Holt later in the 200m.

Aussie pipped for gold in triathlon

There was heartbreak this morning for Australian triathlete Lauren Parker, who had to settle for silver after an incredible late burst to the line from American Kendall Gretsch.

Coming into the final few hundred metres, Parker had a decent lead but Gretsch was able to motor to the finish line in wheelchair at real speed. 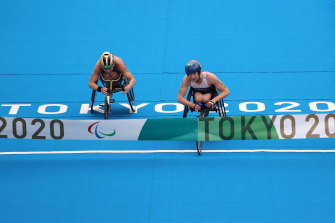 Lauren Parker is beaten to the line by American Kendall Gretsch.Credit:Getty

Incredibly, the American only took the lead in the final metre of the entire race and pipped Parker by a solitary second.

“I just put my head down and went for it. I knew she was coming,” Parker said.

“I did the best I could but got stuck behind one of the girls on that last U-turn (in the final event, the wheelchair race) and lost a few seconds there.

“I knew I had to pull my head down on that finish line. It wasn’t to be for the gold but I am proud of my silver.“

Parker was involved in a horror training accident on the bike that left her a paraplegic. She was on a training ride travelling at 40km/hr when both her tyres blew, catapulting her into a guard rail.

G’day everyone and welcome to our live coverage of the Paralympics. I’m Vince Rugari here to steer you through today’s action.

Our man in Tokyo, Tom Decent, is also on deck ahead of another big day for Australia.

We’ll go through the pick of today’s events in just a moment – there’s a whole of lot of medals up for grabs, particularly in the pool. We’ve got you covered.