The return of champion ruckman Nic Naitanui and premiership tagger Mark Hutchings and the recovery of captain Shannon Hurn has firmed West Coast into $1.21 favouritism for Thursday night's elimination showdown with Essendon.

Veteran premiership defender Will Schofield also comes into the side to partner All-Australian backman Hurn who had been in doubt with "hamstring awareness" suffered in round 23 against Hawthorn. 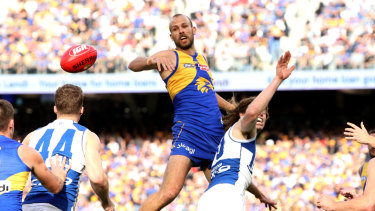 Will Schofield has been recalled for the Bombers clash. He was instrumental in last year’s grand final win.Credit:AAP

"Their forward line can turn the West Coast Eagles defenders inside out," Lloyd said.

But West Coast coach Adam Simpson will hope for equally explosive exploits from Naitanui, who plays his first game since injuring an ankle in round 17 and his first final since the 2015 grand final loss to the Hawks.

Naitanui has played just three games this season as the Eagles omitted Liam Duggan and Jack Petruccelle, while emerging utility Oscar Allen was left out with knee soreness.

I loved every single second of it, but it was so different to how I always pictured that I think it leaves you a bit directionless for a little while.

Meanwhile, St Kilda champion Nick Riewoldt has given West Coast a serve on the eve of the final after referencing comments in May from Eagles defender Tom Barrass that alluded to a lack of motivation.

Barrass, 23, admitted to the club's Backchat podcast that winning the 2018 premiership against Collingwood had left him "a bit directionless".

"You’ve got an idea about what an experience like that will be like and you form the idea from when you’re a very young child… seeing Sam Butler and Benny Cousins on the wall with the cup and the medal… and you think it’s going to be this endless sense of fulfilment," Barrass said.

"It’s not everything it was meant to be. And that doesn’t mean it was a let-down at all.

"I loved every single second of it, but it was so different to how I always pictured that I think it leaves you a bit directionless for a little while."

Riewoldt believed the Eagles could struggle on Thursday night if they didn't draw inspiration to maintain their hunger and said it was obvious where they could find it.

"If you’re looking for that spark, which I think there’s a need for that, I'd be going to Nic Nat, Andrew Gaff and Brad Sheppard, because those boys didn't get to taste what you got to taste last year. Those boys weren’t a part of it," Riewoldt said.

West Coast blew its shot at a double chance after the loss to Hawthorn in the final round of the regular season. 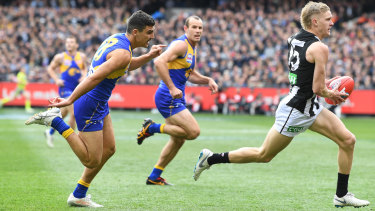 "Tom I hope you found your direction because this time last year the West Coast Eagles cranked it up and managed to go on and win a premiership," Riewoldt told The Bullring on Fox Footy.

"It's time for the Eagles to screw themselves up, start getting in and winning the hard footy that they dominated in the finals and get back on the winners list."

There is much to play once the ball is bounced at 6.10pm in front of 60,000 fans at Optus Stadium, with West Coast defending its flag and Bombers coach John Worsfold – an Eagles premiership captain and coach – reportedly fighting for his future at Windy Hill.

The embarrassment of being bundled from the premiership race in 2016 by the Bulldogs – who went on to win the flag – will also weigh on West Coast's mind but they are a more powerful, experienced and complete team this time around.

The return of Naitanui will give midfielders Luke Shuey, Elliot Yeo, Jack Redden and Gaff far more edge and roar while the forward pressure and goal nous of Willie Rioli, Jamie Cripps and Liam Ryan is second to none in the league.

Worsfold is contracted for next year but rumours have bubbled he could get the chop after a rollercoaster on-field season as the club searches for its first finals win since 2004.

Essendon will rely heavily on a fast-break style of football through the speed of rebounding defenders Adam Saad and Conor McKenna.

West Coast's precision kicking game begins in defence, usually through intercept kings Jeremy McGovern, Brad Sheppard, Hurn and Barrass, but the side may have to find another avenue through the middle and into attack if their defensive intercept marking is non-existent.

Elliot Yeo v Zach Merrett: The nominal centremen are prime movers for their respective sides. Merrett is arguably the Bombers' most important player, averaging 29 disposals, and his ability to break the lines after winning uncontested possessions (he averages 18 a game) is paramount. Yeo is damaging in the packs and on the outside, averaging 24 disposals, 6.5 clearances and eight tackles.

Josh Kennedy v Michael Hurley:  The Eagles spearhead has just five goals from his past four games – meagre returns by his lofty standards. But he looms large in the Bombers' planning with Hurley the best equipped to counter him despite shoulder worries. He has the aerial power, strength and experience to quell JK, who has kicked three or more goals in his past five games against Essendon.

Brad Sheppard v Anthony McDonald-Tipungwuti: The Bomber livewire has lost his scoring spark of late – five goals from his past seven games – but was dynamic last-start against Collingwood. With his explosive match-turning abilities, McDonald-Tipungwuti is the threat the Eagles simply must control to emerge victorious. While Sheppard has kept Fantasia quiet in recent clashes, he's likely to be redeployed in a lockdown role on McDonald-Tipungwuti.