Rousseau dives into the Games, 65 years after his grandfather won gold

Australian diver Cassiel Rousseau has qualified for the men’s 10-metre platform semi-final at his first Olympics, starting off in style some 65 years after his grandfather won gold in Melbourne.

Rousseau, who represented Australia in acrobatic gymnastics at several international events before switching focus to the pool in 2017, finished eighth in the preliminary round in Tokyo. 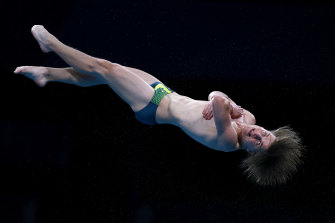 Australia’s Cassiel Rousseau is through to the semis of the 10-metre platform diving competition.Credit:Getty Images

The 20-year-old will take part in an 18-strong semi on Saturday morning, with the top 12 divers in that competition advancing to a final later in the day.

China’s Yang Jian, who signed off with a spectacular forward four-and-a-half somersaults in the pike position that was awarded a score of 102.5, topped Friday’s qualifying with a total of 546.9 points.

Brit Tom Daley, who won 10m-synchronised gold at this Games and passed time between Friday’s dives by knitting, qualified in fourth position with 453.7 points.

But his late grandfather Michel Rousseau, a track cyclist, delivered one of France’s four gold medals at the 1956 Melbourne Games.

Cassiel Rousseau, who finished ninth in the 10m event at the 2019 world championships, was the first of 29 divers to hit the water on Friday.

Rousseau’s opening score of 68.8 helped settle any nerves, lifting him into 11th spot after the first round of dives.

The Queenslander was ranked ninth at the halfway point of proceedings and saved his best for last, earning a score of 83.25 for a forward four-and-a-half somersaults in the tuck position.

Fricker, who boasts 1.1 million TikTok followers and launched his own wheat-based drinking straw company while at school, slipped out of the top 18 after his second dive.

Every Olympian has encountered logistical hurdles in the past six months but that is particularly true for Australian divers.

The World Cup snub meant Australia were not represented in any synchronised events at the Olympics.