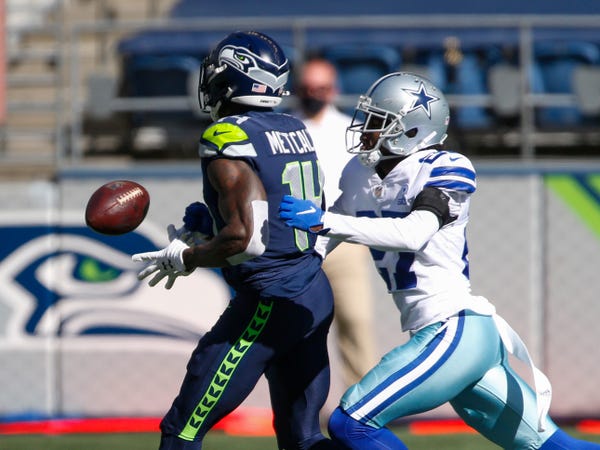 DK Metcalf had a long day on Sunday.

The second-year Seahawks wide receiver made a rookie mistake in the first quarter against the Dallas Cowboys, fumbling away a surefire touchdown because he thought he was in the clear.

Metcalf burned his defender and caught a beautiful over-the-shoulder ball that Russell Wilson dropped in the bucket. All he had to do was keep running, and he was home free.

But Metcalf seemed to think he had a bit more clearance than he actually had on Tevon Diggs, who, in a great show of stubborn defending, sprinted to make up ground and punched the ball out of the receiver's hand. The ball was fumbled out of the end zone for a touchback, giving the Cowboys possession.

It was a tough break for Metcalf, who so far has been a stud for the Seahawks passing attack.

Thankfully, he got the chance to make up for his error.

With the Seahawks trailing 31-30 with just over two minutes remaining, Metcalf capped off a beautiful drive with another over-the-shoulder catch. This time, he was already across the goal line by the time he came down with the ball.

The Seahawks made one final defensive stand and went on to continue their undefeated start to the season. For Metcalf, it was a brilliant recovery and likely came with a lesson he won't soon forget.