Nasser Hussain sees no reason to change a winning team, with England the same again for the second and final Virtual Test against Sri Lanka. 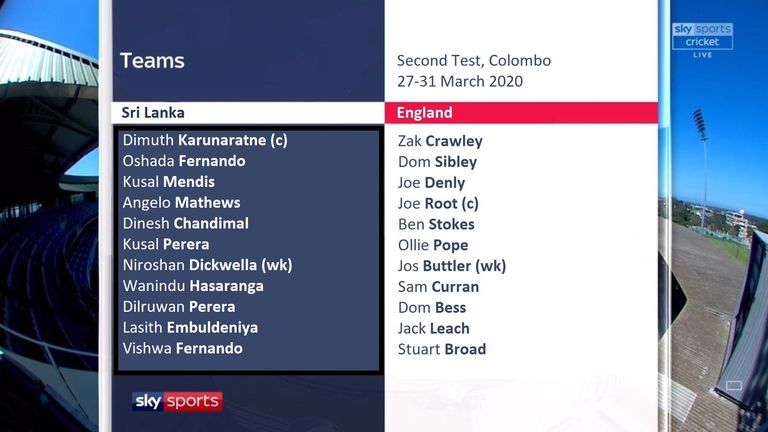 Captain Joe Root (95) and opener Dom Sibley (72) also impressed with the bat, meaning guest selector Hussain has picked an unchanged XI for the game in Colombo from Friday, which you can follow across Twitter as well as on skysports.com and the Sky Sports app.

We asked the great Kumar Sangakkara to pick the Sri Lanka side and he has opted to make two changes – the fit-again Kusal Perera and Wanindu Hasaranga replacing Dhananjaya de Silva and Suranga Lakmal.

Wickets a turner, Mathews back to full bowling fitness and Hasaranga has recovered fine from hamstring. Now Sri Lanka needs to win the toss 😀

Kumar says Angelo Mathews can open the bowling in Lakmal’s absence, as he has bowled a bit in one-day international cricket of late and can be counted on for a few short spells a day.

Sanga feels the Colombo pitch should offer appreciable turn so Hasaranga – a hard-hitting, leg-spinning all-rounder, who will now make his Test debut – could play an important role.

A hamstring injury kept Hasaranga, who has been in good form domestically, out of the first Test but he is now ready to return, as is batsman Kusal Perera. Kusal, who missed last week’s match with finger issue, could be a vital man for Sri Lanka, with his stunning, match-winning hundred against South Africa in Durban last year an example of his considerable talent.