THE LIONS were forced to a final Test decider as this barbaric never-ending story rolls on for another week.

In a bloodthirsty second Test South Africa roared back with a vengeance. 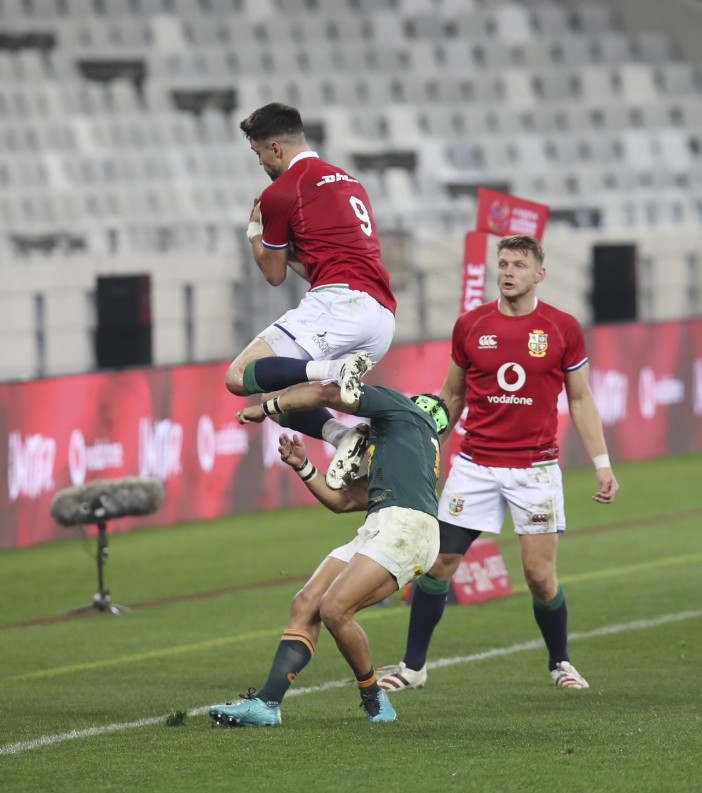 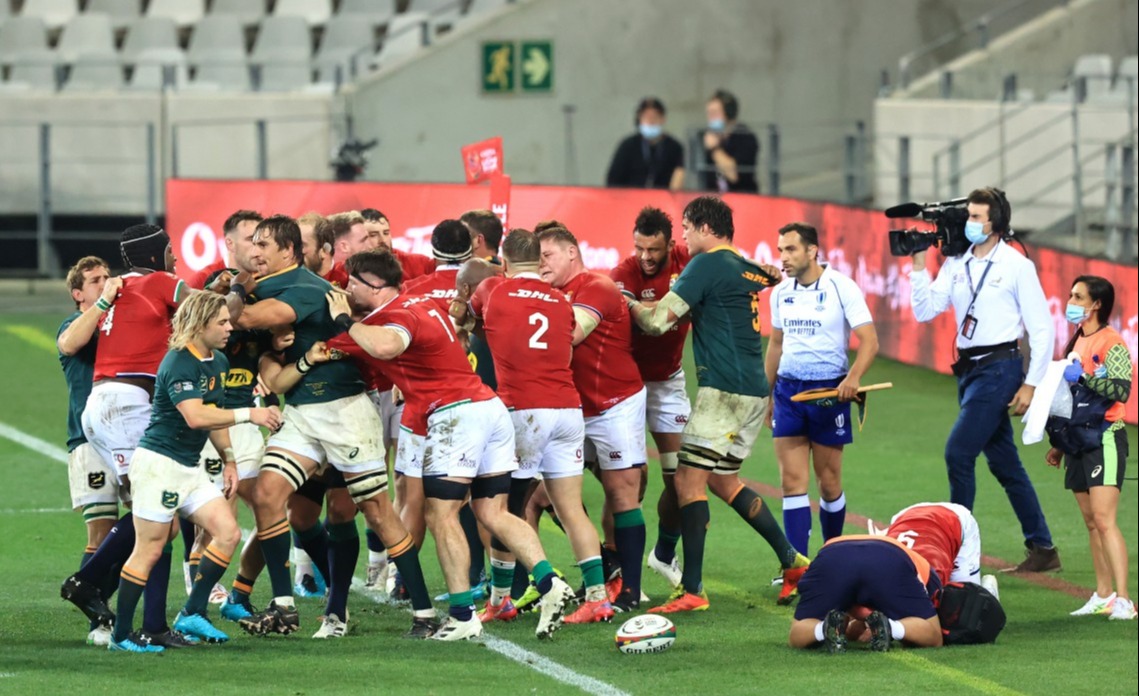 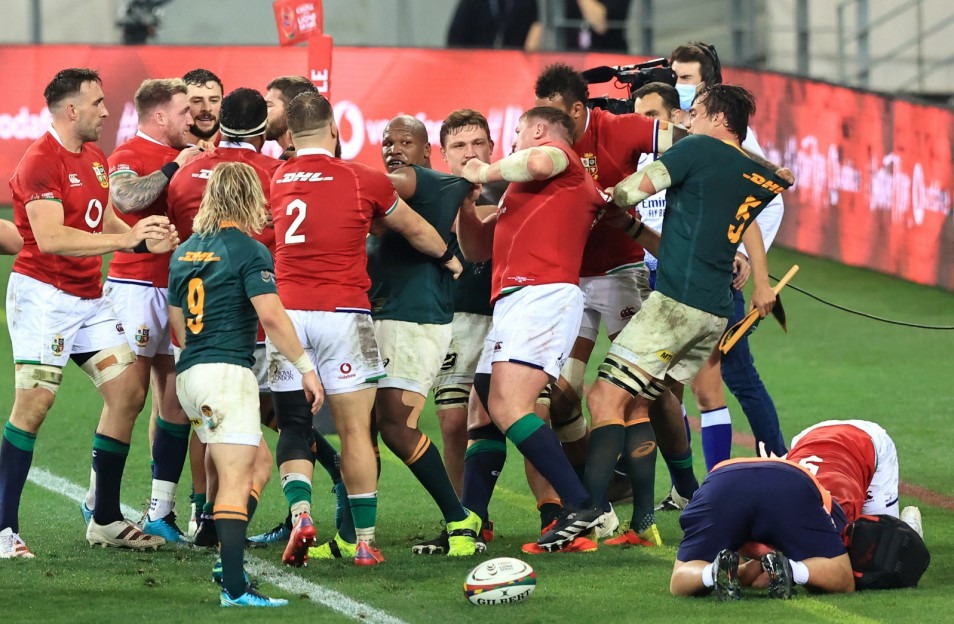 The Boklash they promised, was delivered.

So the bubbling Cape Town cauldron gets one final grudge match to settle this simmering series once and for all.

But just how many of the players will be left to take the field after Cheslin Kolbe, Faf de Klerk and Lions winger Duhan van der Merwe now sweat on citings for foul play.

Tries from Makazole Mapimpi and Lukhanyo Am sunk the Lions as it was Warren Gatland's side who suffered a second-half collapse after leading 9-6.

Tempers were flaring and the raw emotion was palpable in the empty stadium.

And whilst you might have thought that the superb giant locks from each side – Maro Itoje and Eben Etzebeth – would be the chief instigators for the bitter fights, it was the two smallest blokes on the pitch who really kicked off.

Pint-sized winger Kolbe should have seen red for his awful and dirty in-air hit to dump Conor Murray on his head.

And scrum-half De Klerk also got lucky for a nasty high shot on Murray – despite the Lions being told they had "destroyed the integrity of the series" during the week with their verbal shots.

So New Zealand's man in the middle, Ben O'Keefe, picked apart everything, but refused to dish out the reds. 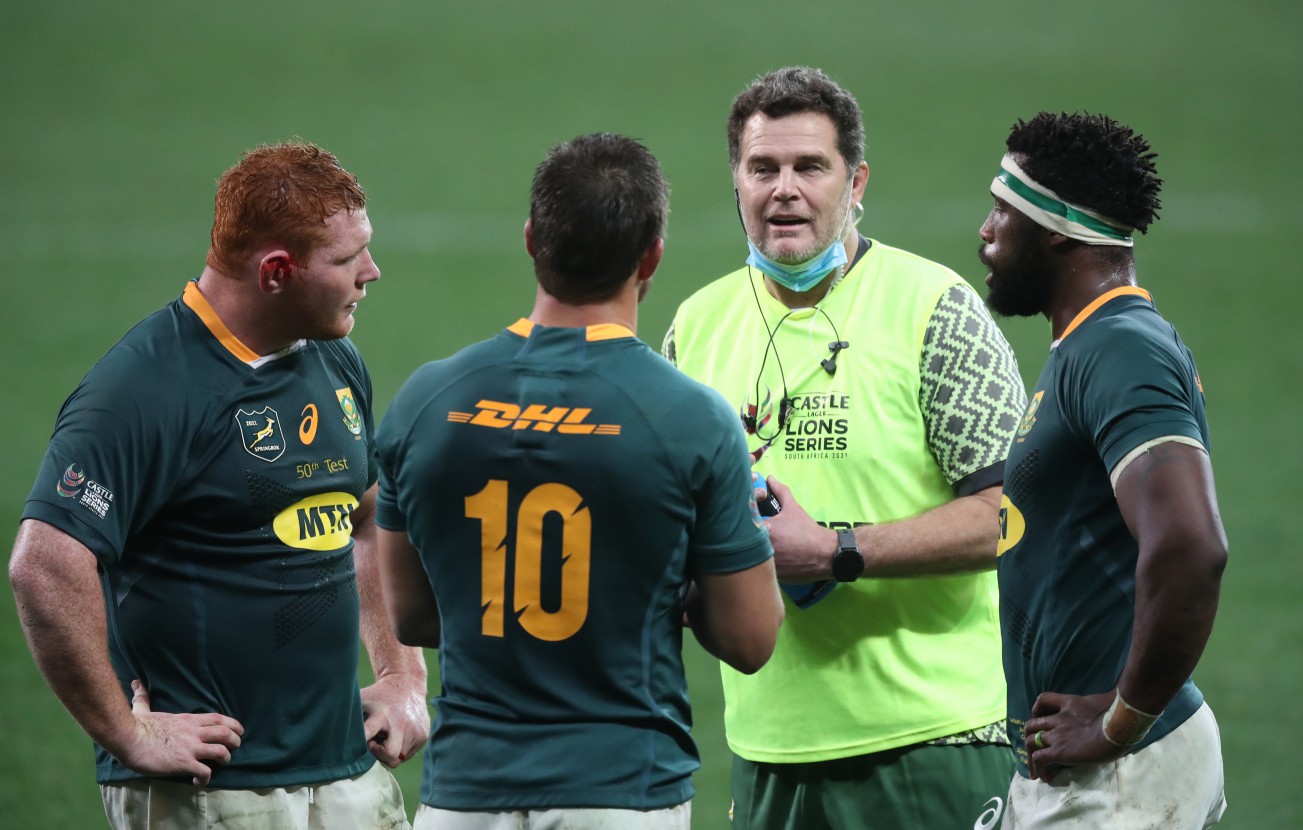 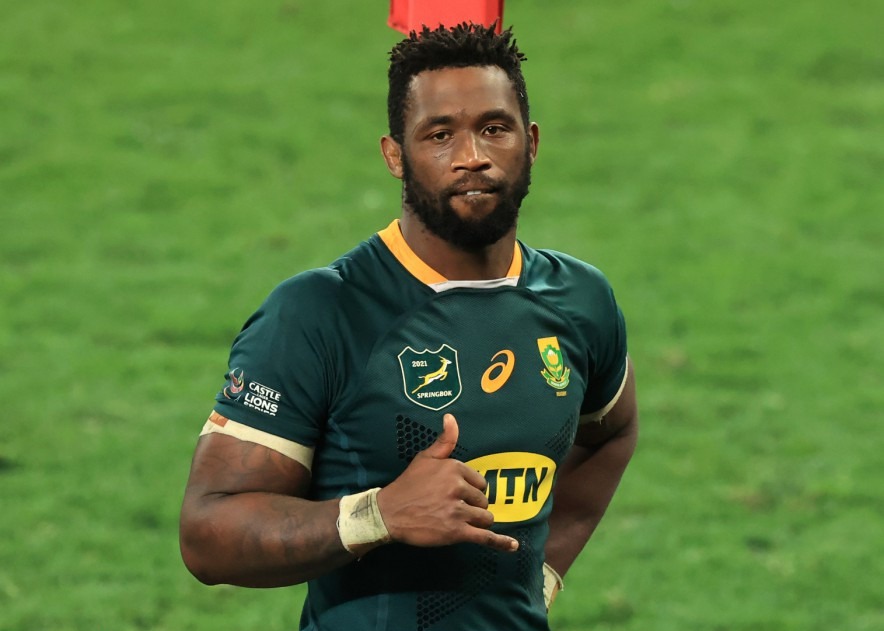 The sulking Springboks boss had also vowed to quit the series after his extraordinary and sensational knifing of referee Nic Berry.

Instead, he will be revelling in this revenge mission after a week of crocodile tears.

Erasmus arrived on his own, and through the back door, just over an hour before kick-off.

And all eyes were on him and the man in the middle for this one after his theatrics.

Ref O'Keefe gave away the first penalty after just a minute when Mako Vunipola was pinged.

As the Boks piled into the Lions 22, Alun Wyn Jones didn't take a step back and squared up to Etzebeth as things flared up.

The Boks kept punching though, legally, and they landed the first blow when Handre Pollard converted his first penalty.

The Lions roared back, though.

Dan Biggar launched an up-and-under and when Boks fullback Willie le Roux knocked on it gave them a scrum five metres out.

The pack did their job and Leicester Tigers no.8 Jasper Wiese's no-arms hit on Luke Cowan-Dickie gifted Biggar his first pen to level.

Gatland's boys weathered the early storm and Biggar kicked his second three to edge them ahead. 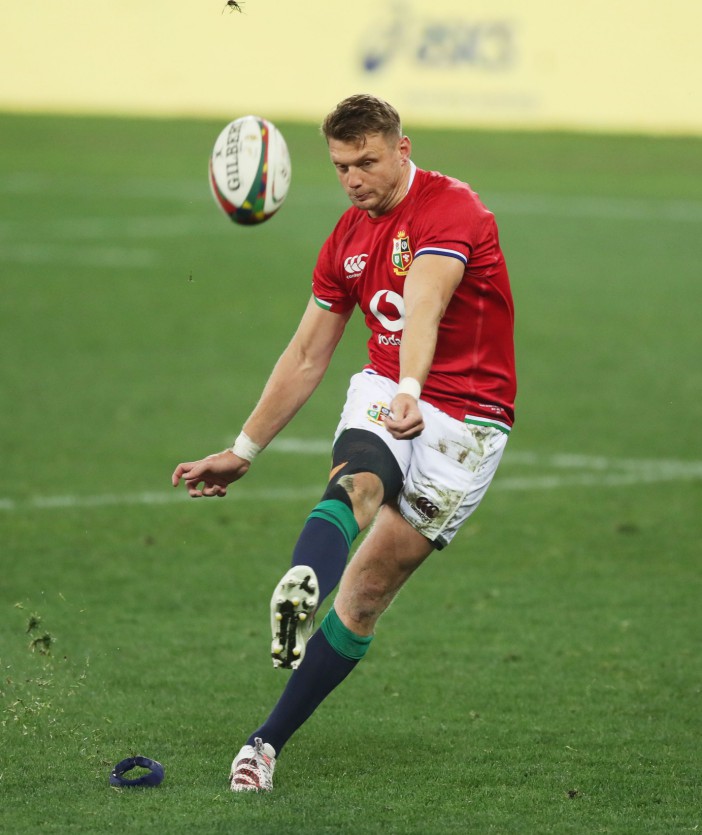 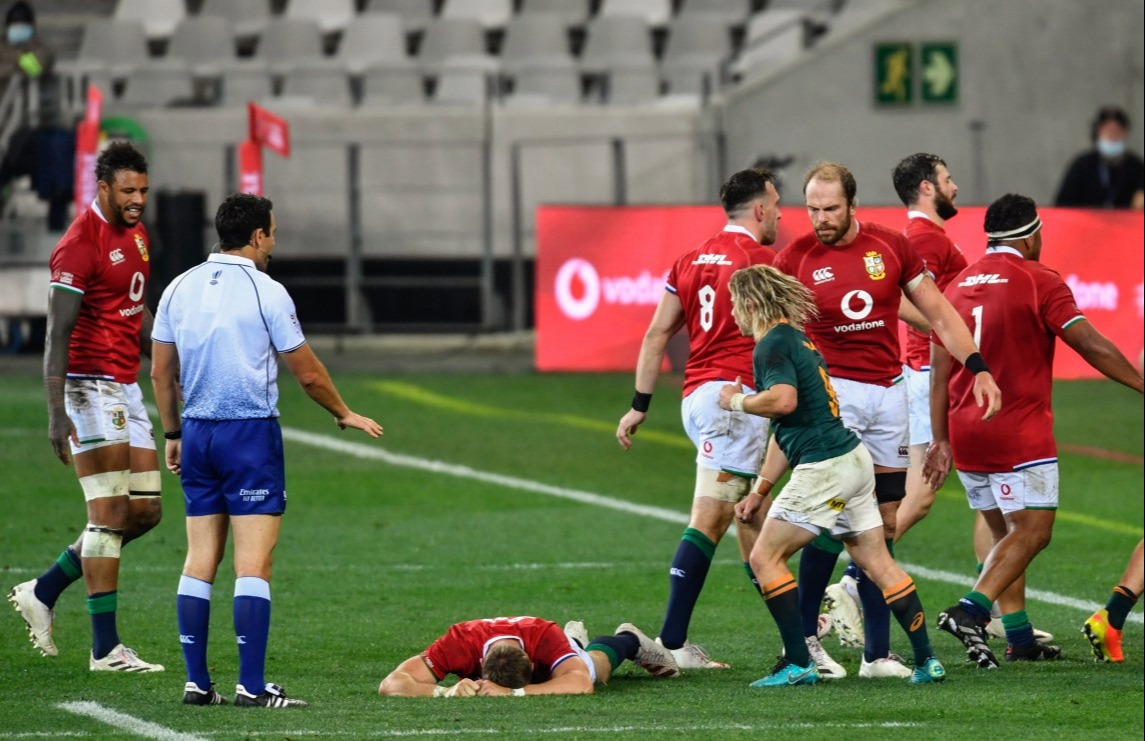 South Africa playmaker Pollard missed the chance to level as the pressure got to him and things got worse for them when 2019 world player of the year Pieter-Steph du Toit came off with an injured shoulder after just 22 minutes.

The Lions had their own problems though, when Van der Merwe tripped Kolbe and was sent to the sin bin.

Kolbe then found himself in the bin for his horrific mid-air hit on Murray, who landed on his head but survived to stay in the game.

The gripping opening 30 took 50 minutes to complete as the whole first half dragged on for over an hour.

Pollard levelled at 6-6 with 10 to go before more crazy drama. 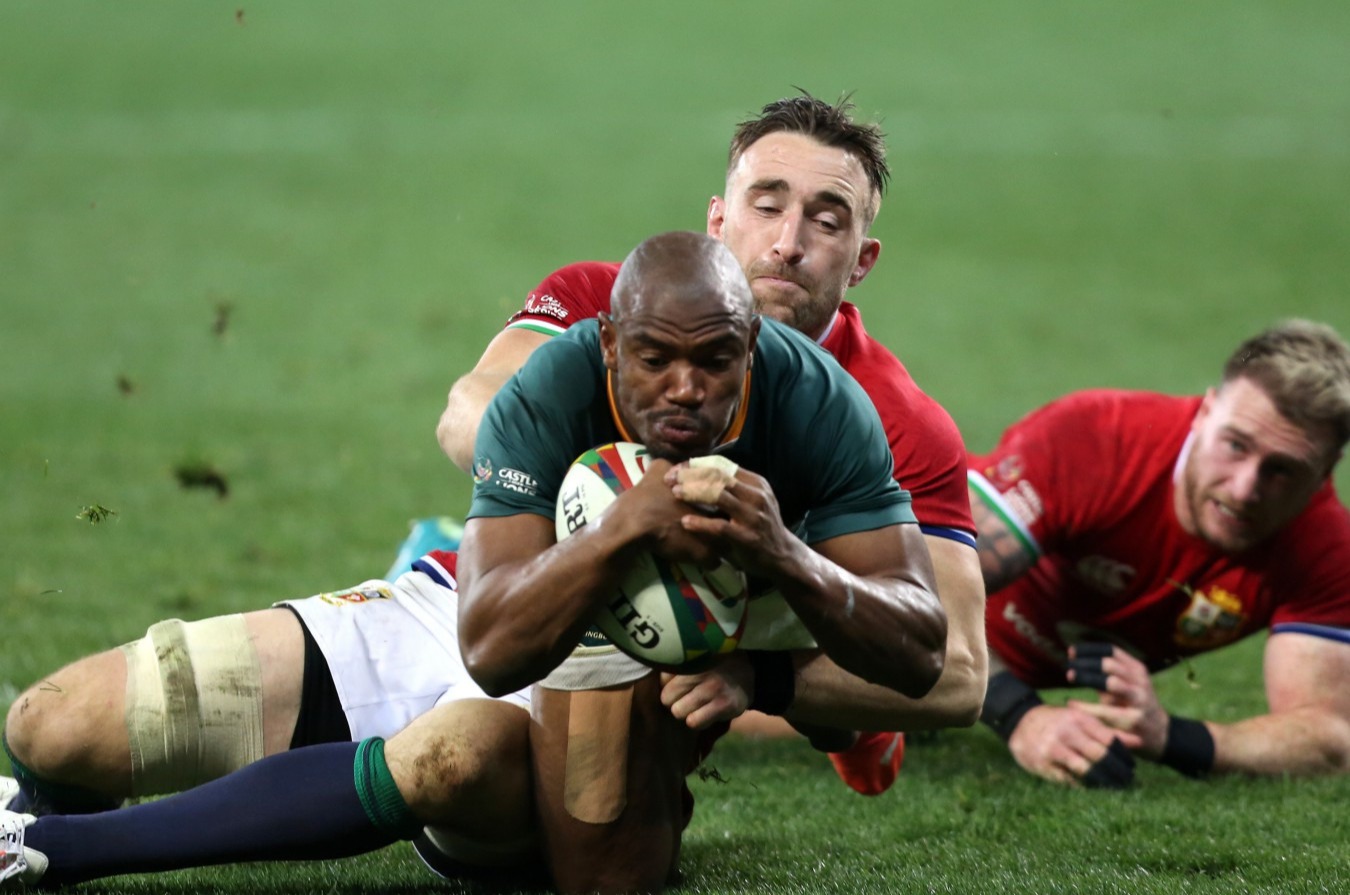 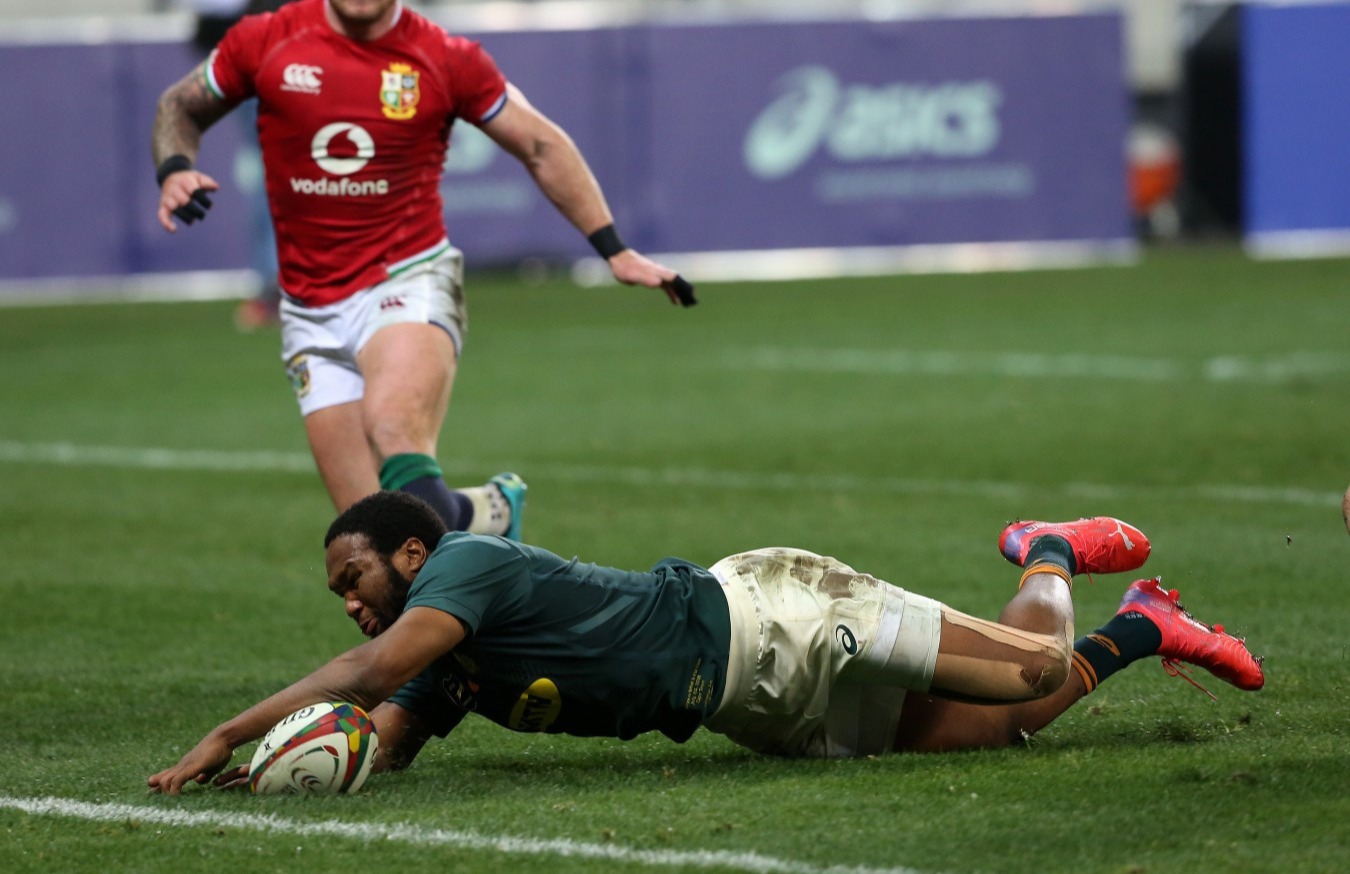 Scheming De Klerk was let off a high no-arms hit on Murray and then Robbie Henshaw had what looked like a try scrubbed off.

Kolisi also made the ref and TMOs choice of awarding a five-pointer tough as he disrupted the centre.

But Biggar made sure all of that heartache wasn't for nothing as Bongi Mbonambi's awful no-arms hit on Curry was flagged as the Boks continued to show little regards to the rules.

The wounded Springboks came flying out after the marathon first half.

And Mapimpi's awesome finish to beat Anthony Watson, Stuart Hogg and Jack Conan to collect Pollard's cross-kick for the first try was finally some beauty amongst the mess.

Biggar rattled the post with his fourth penalty shot that would have put them back ahead.

Then Am struck on the hour mark with his score as he was first to ground De Klerk's lovely through ball after a huge Boks maul.

Pollard's trusty boot then struck again to stick the knife in at 21-9 with less than 10 minutes left on the clock before the fly-half added another with the last kick.

Quite simply, the Boks monstered the Lions at the breakdown, the scrum and in the air as they shut them down in a second-half masterclass.

The Lions have no choice but to come roaring back for what is set to be another 80 of absolute brutality on Saturday.