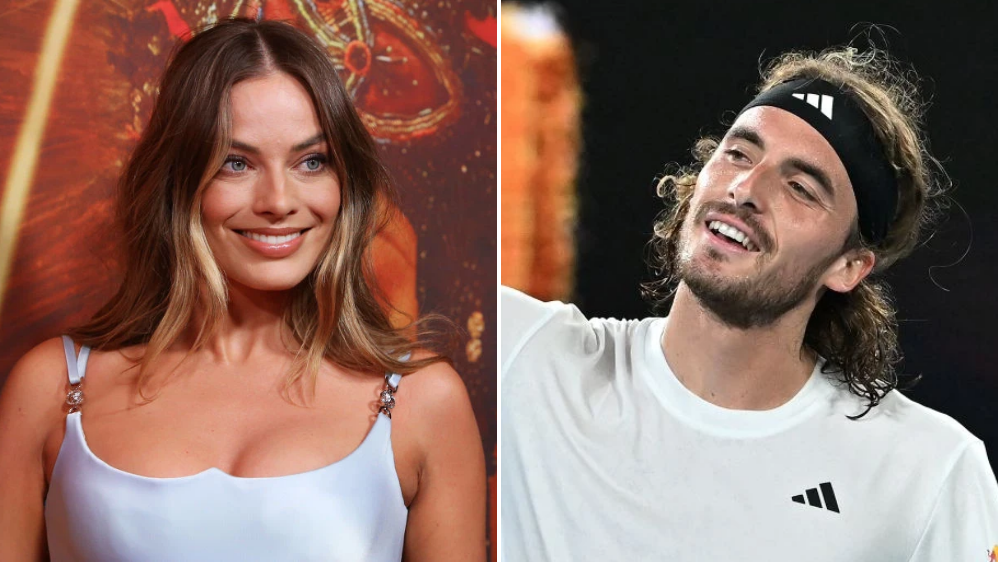 Greek tennis star Stefanos Tsitsipas has invited actress Margot Robbie to watch him play after he reached the semi-finals of the Australian Open.

Third-seed Tsitsipas beat Jiri Lehecka of the Czech Republic 6-3 7-6 6-4 in the last eight on Tuesday and will next face Karen Khachanov as he bids to reach the final.

Tsitsipas, the highest seed left at Melbourne Park, has never won a Grand Slam title but has a great chance of reaching his second major final after finishing as a French Open runner-up in 2021 as he prepares to take on the Russian 18th-seed.

The 24-year-old was almost kicked out of the Australian Open during his victory over Lehecka after nearly hitting a ballboy in frustration.

But Tsitsipas avoided being defaulted and speaking in his on-court interview following his win, he said: ‘Australia is such a great country.

‘I like a lot of Aussie things. One of my favourite actresses comes from here, Margot Robbie.’

Asked to elaborate on his apparent crush by on-court interviewer Jim Courier, Tsitsipas added: ‘It would be nice to see her here one day,’ confirming that it was an invitation for her to come and watch him in action.

“That’s what Australia means to me.” @steftsitsipas admits he would love to win the #AusOpen and build a school in Victoria with the prize money. ð#AO2023 pic.twitter.com/e775vKNZOi

Robbie, 32, is one of the biggest names in Hollywood and is perhaps best known for her acting roles in The Wolf of Wall Street, Suicide Squad, Mary Queen of Scots, Once Upon a Time in Hollywood and I, Tonya.

Tsitsipas, meanwhile, who has won nine titles on the ATP Tour and is ranked world No.4, will likely have to overcome Novak Djokovic if he is to lift the Australian Open title.

‘I’m feeling great with my tennis,’ Tsitsipas told reporters after his quarter-final victory. ‘I don’t think I’ve felt so good in a long time.

‘I’m a different player, playing different. My mentality is different. When I’m out on the court, I don’t really think of negatives, to be honest. I just go out there and play the game.’