Mojo located, memories made, records broken, the Australian swimming team has checked out of the Tokyo Olympic Village to return for two weeks of quarantine and a well-earned break.

For headliners like Emma McKeon, Ariarne Titmus and Kaylee McKeown, a 14-day pause from the outside world may be just what they need to digest what transpired in the Olympic pool and rest up for the media and fan blitz when they finally emerge from the cocoon.

Yet for head coach Rohan Taylor and his team, there will be little relent as Swimming Australia prepares for a demanding racing schedule across coming seasons, including an Olympic Games in Paris that has a three-year lead-up, not the customary four.

Before that, there will be a pair of FINA World Championships plus a Commonwealth Games, and all the various trials and domestic meetings along the way. Managing that workload, balancing rest, and attempting to provide some certainty in an uncertain racing climate will be among Swimming Australia’s biggest tests.

Some Australian swimmers, including Kyle Chalmers, will barely get their feet back on home soil before they head to Europe for the International Swimming League, a lucrative professional series of team events that runs begins in Naples in late August.

Others will need the mental and physical break, simply to refresh from such a high-pressure occasion or for team stalwarts like Cate Campbell, Bronte Campbell and Mitch Larkin, ponder their future in the pool. 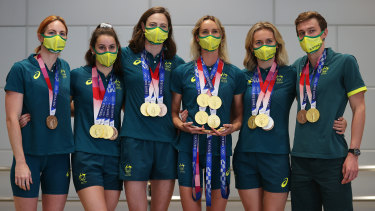 Taylor and the high-performance team have had no choice but to get ahead of the curve and with success in Tokyo will come added expectation. The next World Championships are in May next year in the Japanese city of Fukuoka, then the team will head towards the Commonwealth Games in Birmingham.

The following year, there is another World Championships in Doha, which is being held in November, unusually late for the sport, before they return home to begin the downhill run towards another Olympics.

“We’ve been working on that for months and in quarantine we’ll finalise some of those [plans]. They’re more about where we’re going to stay before we go. Just having gone through staging and all of the challenges we had with the movements of the team, it’s just whether we go straight overseas. Those things we’ll look it,” Taylor said.

Meetings will be added to keep the Commonwealth Games swimmers active before they join forces with the main group and head to England to do battle in Birmingham.

“We’ll have a grand prix meet in June, where there will be extra selections. And the following year’s worlds is very late, November I think, so we have a good chunk of time after that,” Taylor said.

“These guys need a break, so how do we support them in their break? Those are the things we will work on in quarantine. But we’re pretty advanced.”

A top-level focus for Taylor and his team will be to keep the senior athletes fit, fresh and motivated. The all-conquering Emma McKeon is 27 and will be 30 by the next Olympics. Completing a seven-race program at that age will be an immense challenge but she has just hit career-best form.

Tokyo has shown how vital it is to have experienced swimmers on the squad to not only perform but help the newer faces deal with racing at the elite level. Many of the Olympic rookies, including McKeown and Zac Stubblety-Cook, spoke of their influence during a memorable week in Tokyo.

The good thing for the resurgent sport is that the narratives created in Tokyo won’t subside ahead of the next Olympics. Titmus and Katie Ledecky should clash twice more before then, while new faces will get more chances to taste the big stage ahead of Paris.