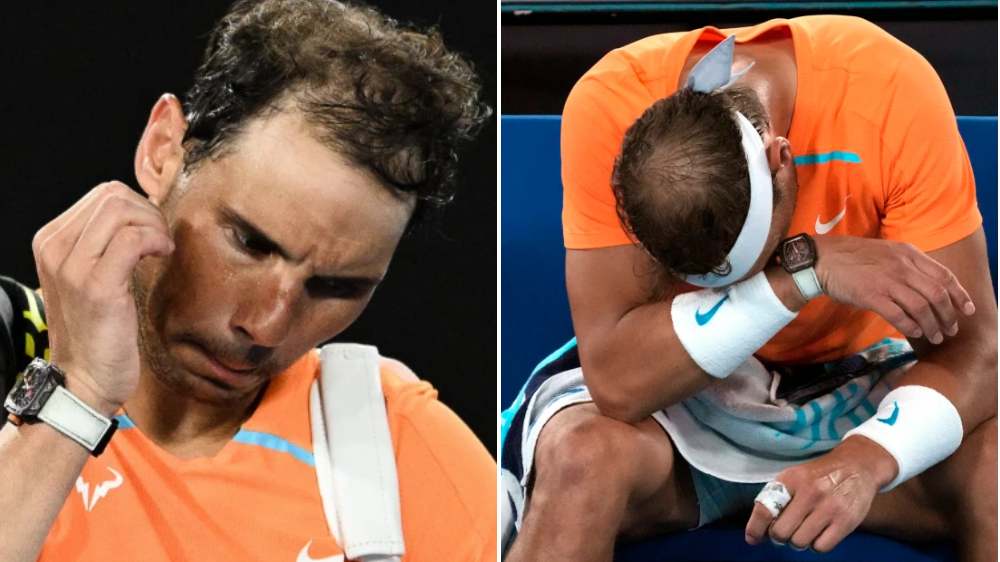 An injury hampered Rafael Nadal crashed out of the Australian Open after a shock straights set defeat against Mackenzie McDonald 6-4, 6-4, 7-5 .

Nadal’s bid to defend the title he won in astonishing circumstances last year and win a record 23rd grand slam looked doomed from the moment he pulled up awkwardly at the end of a point late in the second set against the 65th-ranked McDonald.

The No.1 was visited by a trainer on the sideline, then left the court for a medical timeout. Up in the stands, his wife wiped away tears. Nadal returned to play, but was physically compromised and not his usual indefatigable self.

‘He’s an incredible champion. He’s never going to give up, regardless of the situation, so even closing it out against a top guy like that is always tough,’ said McDonald, a 27-year-old American.

‘I kept focusing on myself in the end and got through.

This is Nadal’s earliest exit at any Grand Slam tournament since bowing out in the first round in Melbourne in 2016 against No.45 Fernando Verdasco. That also made Verdasco the lowest-ranked player to defeat Nadal in Australia – until, of course, McDonald on Wednesday.

McDonald has never been past the fourth round at a major tournament. In his lone previous matchup against Nadal, at the 2020 French Open, McDonald won a total of just four games in a lopsided loss.

‘I’m really happy with how I started that match. I thought I was playing really well, serving great, returning well, too,” McDonald said. “So I was really taking it to him.’

Nadal has dealt with a series of health issues recently and it remains to be seen whether the 36-year-old has played his last match at this famous venue.

He needed pain-killing injections for his left foot on the way to winning the French Open last June, pulled out of Wimbledon last July before the semifinals because of a torn abdominal muscle and also dealt with a problem with rib cartilage in 2022.