Katarina Johnson-Thompson says it will “take a lot of time to process this reality” after a calf injury ruined her hopes of winning a heptathlon medal at Tokyo 2020.

The Team GB athlete was in fifth position overall on Wednesday after excelling with a first-place finish in her 100m hurdles heat, recording a time of 13.27 seconds.

However, she pulled up in the 200m race and refused treatment before picking herself up to jog across the line, with British Athletics confirming later on that she has withdrawn from the competition.

In a heartfelt statement on Twitter on Thursday, Johnson-Thompson expressed her pride and revealed the extent of the difficulties she has faced after her injury heartbreak in Tokyo.

“I don’t know where to begin in trying to explain how I feel,” she wrote.

“Only a handful of people understand what I’ve been through. Even a smaller amount understand the mental and physical challenges I’ve faced trying to make it back in time through a pandemic after my Achilles ruptured the back end of December. I started the year in a wheelchair and I was not willing to end my Olympic campaign the same way.

Going to take some time to process and heal my body & spirit ❤️‍🩹 pic.twitter.com/B7YIYD5MJV

“To make it to the line was a miracle. To not only do that, but to be on my way to putting a decent score together, is heartbreaking. I truly believed I was capable of winning a medal despite having up to half a year of missed training.

“More than ever, I am proud that I showed up, put myself out there and tried. It would have been very easy to shy away & pull out, to say I wasn’t ready and blame the injury but I’m not that type of athlete or person.

“I am a fighter, I’m gritty AF and I find it extremely hard to give up. I can rest easy knowing I applied myself every single day and pushed until I couldn’t push anymore.

“I’ve sacrificed so much, moving my entire life to France five years ago away from my family and friends. I’ve lost heart knowing that the work my team and I have done for the last eight months was for this outcome and I hate that my story has played out in more heartbreak.

“I’ve been knocked so many times and got back up, but it will take a lot of time for me to process this reality. 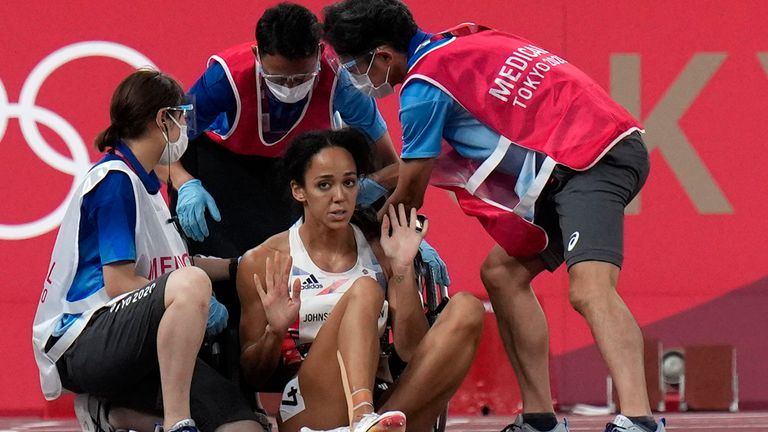 The 28-year-old suffered a ruptured Achilles towards the end of 2020 that she believed had healed enough for her to compete for a medal in Tokyo.

The Liverpudlian managed a third-place finish in her Group B of the high jump event, clearing 1.86m which was well off her 1.98m British record, and then faltered in the shot put.

Johnson-Thomspon will not compete in the javelin, long jump and 800m women’s heptathlon events which take place on Thursday.