With a 61-45 defeat of the Giants, Melbourne Vixens have joined the NSW Swifts at the head of the Suncorp Super Netball ladder as the only teams with two wins and seven of a possible eight bonus points from the opening two rounds.

On the afternoon that Kim Green became just the third active player – after Nat Medhurst and Caitlin Thwaites – to play 200 games, the hosts spoiled the party by adding a second impressive victory to their 73-61 defeat of the Queensland Firebirds on the same court eight days earlier. 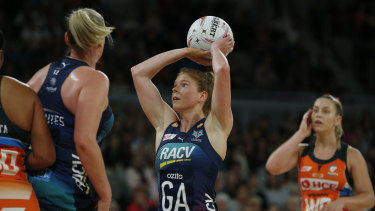 Sharp shooter: Vixen Tegan Philip lines up an attempt on goal during the round 2 match against the Giants at Melbourne Arena on Sunday.Credit:AAP

After a seven-goal upset loss to the Swifts in their opener, the Giants are still without a win, and failed to win even a quarter.

While the most serious injury befell one of the Vixens’ dancers, who was wheeled off after a mishap during the final time-out, Green had to leave the court after colliding with Jo Weston during the second quarter. When she returned at half-time it was into centre in place of Amy Parmenter, the position filled so capably by Serena Guthrie in 2018.

But, like Bec Bulley and Susan Pettit, Guthrie is gone from the current Giants list, while the Vixens’ only change to its first-choice seven for much of last season has been the addition of Caitlin Thwaites. Familiarity is breeding cohesion, a fine understanding, and slick ball movement.

The Vixens had won only the first of their five previous matches against the Giants, back in round six of 2017, with close-checking defender Bulley a regular thorn in their side. Tegan Philip is one who would have shed few tears when told of Bulley’s retirement after a fine farewell season in 2018. 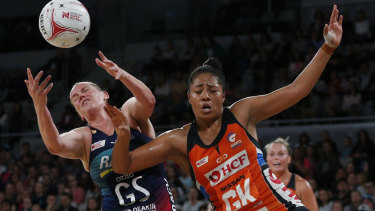 Eyes on the prize: Melbourne’s Caitlin Thwaites goes up for a grab againt Samantha Poolman of the Giants.Credit:AAP

Indeed, Philip played a fine game, using her renowned speed to good effect against Kristiana Manu’a and then Matilda McDonell and finishing off her team’s fine all-court defensive efforts with assured shooting that included nine goals in each of the first two quarters and 31 from 37 attempts overall.

The defence, too, was exceptional, with Diamonds pair Emily Mannix and Jo Weston limiting one of the league’s more formidable – if, admittedly, brand new – shooting combinations to an unusually low total, with goal keeper Kadie-Ann Dehaney given her first minutes of the season when Mannix was rested for the last eight minutes.

English international Jo Harten put up only five shots in the first three quarters, and Caitlin Bassett, while still trying to regain touch a long period sidelined with a fractured arm, was relatively quiet again in her second game with her new club, and kept to just 35 goals.

Certainly, with Diamonds coach Lisa Alexander again in the audience, and just a handful of SSN rounds before the squad is named for the Netball World Cup, the Vixens’ circle pair are continuing to make a compelling case for inclusion.

Lizzie Watson, Thwaites, match MVP Kate Moloney and Philip are all either certainties, probables or possibles to make the trip to Liverpool for Australia’s title defence in July. And, on the evidence so far, if Renae Ingles was available, she would be well in contention, too.

The Vixens were again slightly tardy to begin, conceding the opening three goals, but the damage was well-enough contained that one other similar deficit before they found their groove later in a 16-10 first quarter was as far as they ever fell behind, a burst of seven before the first break a decisive period in an emphatic win.