The world's peak anti-doping body will back Swimming Australia's campaign to strip banned swimmer Sun Yang of his titles from last year's FINA world championships and surrender his gold medal to Mack Horton.

The World Anti-Doping Agency, in prosecuting the case against Sun Yang before the Court of Arbitration for Sport, submitted that under FINA's anti-doping rules, Sun should forfeit all medals, points and prizes won after he obstructed drug testers in September 2018. 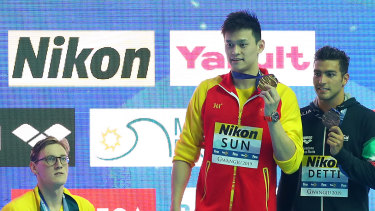 Mack Horton’s rivalry with Sun Yang hasn’t made him popular in China.Credit:Getty Images

FINA was a party to the CAS hearing but made no submission on the question of Sun's medals. Counsel for Sun argued that, given he had not committed an anti-doping against him, any sanction would be disproportionate.

The three members of the CAS panel, after a finely balanced deliberation, decided against stripping Sun of his 2019 world championship titles on the grounds that his mandatory, eight-year suspension for tampering with a doping sample was already a "severe" penalty.

FINA's anti-doping rules stipulate that "all competitive results" recorded after an anti-doping rule violation and before a period of ineligibility "shall, unless fairness requires otherwise, be disqualified with all of the resulting consequences including forfeiture of any medals, points or prizes".

In its published reasons, the CAS panel makes no mention of whether it also considered the impact on other athletes, such as Horton and Japan's Katsuhiro Matsumoto, who finished second to Sun Yang in the 200m freestyle final in Gwangju.

"The panel considers that an eight-year period of ineligibility is, although justified in application of the rules … a severe sanction," the panel found. "The panel notes that it is, under the rules, afforded a discretion to disallow the disqualification of results if fairness requires otherwise.

FINA, having earlier supported a submission by Sun's lawyers which, if successful, would have resulted in WADA's case against him being thrown out on a technicality, is under increasing pressure to deliver justice to those who shared a pool with Sun at the world championships.